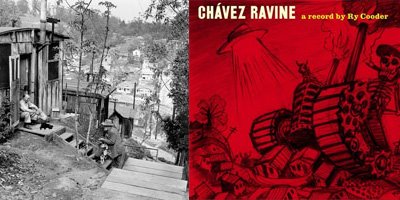 John Hill's Archidose blog has a great post on Ry Cooder's album Chavez Ravine, which recalls the almost idyllic working class Mexican-American neighborhood's destruction in the 40's and 50's in a Chinatown-like pursuit of money and power.

In this case, however, the motivator wasn't water but baseball. Even as long-suffering Dodger fans were enjoying their 1955 moment of triumph as the team won its first-ever World Series, owner Walter O'Malley was plotting to sell them out in favor of tapping into the money gusher that was mid-century California with a move to Los Angeles.

Plans for a public housing project with the achingly ironic name of Elysian Fields, whose architects included the legendary Richard Neutra, were deep-sixed, all the current residents evicted, and the neighborhood wiped off the face of the earth to make way the construction of the Dodger's Chavez Ravine stadium. It's a cautionary tale of the intersection of power, planning and architecture, especially timely in the light of the Supreme Court's recent decision to give cities carte blanche in using eminent domain in condemning people's home and businesses to turn them over to monied developers. The Archidose link's include one to Chavez Ravine: 1949, a book of photographs of pre-Dodger Chavez (example above-left). Check it out here.