Getting a head start on the construction on Block 37 just kitty-corner to the southwest, and just across the street from The Department Store Formerly Known as Field's, Larry Booth's MOMO is raising its distinctive profile. 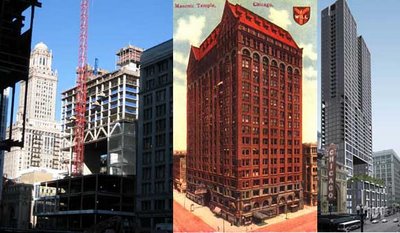 And while that name in my mind will always conjure up the mobster whose surprise birthday party gives him a fatal heart attack at the beginning of Get Shorty, in the mind of the building's developer, William Smith, it stands for "Modern Momentum", the marketing concept behind the 31-story residential skyscraper designed by Laurence Booth and Booth/Hansen Associates, replacing earlier designs by Lucien Lagrange, once Smith's favorite architect (Erie on the Park, one of Chicago's best recent buildings, and Kingsbury on the Park), but now apparently scorned and exiled.

MOMO's most distinctive feature is a four story gap above the four story podium, two floors of which have been purchased by the Joffrey Ballet. Not only does it bring light and openness in what is depicted as a landscaped terrace in renderings, but it raises the condos above an existing multi-level garage, whose architect, ironically enough, happens to be Lucien Lagrange.

Most people think of MOMO replacing a squat, two-story structure that for as long as anyone can remember housed a Walgreen's drug store, as well as, for longer-lived memories, the Loop theater, originally a newsreel house, that was converted to an "art" house that had long runs with everything from Mel Brook's immortal The Producers, to the soft-porn of Russ Meyer.

However, the MOMO is actually restoring the parcel to its former glory. It's the location of the Masonic Temple, the great 1892 skyscraper designed by John Wellborn Root and Daniel Burnham that at the time of its construction was the world's tallest building, and remained the city's tallest for another 30 years. It also may have been the first real vertical shopping mall. It's first nine floors, centered around a light court, were filled with shops, and the floors themselves not numbered but named like streets. Shoppers of that time, however, were not quite ready for a fin de siecle Water Tower Place, and the entire building was demolished in 1939, replaced with the two-story Walgreen's building, erected as a temporary "taxpayer" structure holding down the site and generating just enough revenue to pay

the property taxes until such time as a favorable environment for major redevelopment returned. In the case of the Walgreen's building, that took over 60 years. The Masonic Temple, known for the Winter Garden at its crest, is only slightly outdone by MOMO - 302 feet in height for the Masonic, 409 for MOMO.

Laurence Booth is on something of a role lately. Not only does he have MOMO underway, he's just finished renovating the classic art deco skyscraper The Palmolive Building into condos (Vince Vaughan is rumored to be scoping out the penthouse for himself and Jennifer), and at 30 West Oak, another Smithfield residential project, he's completing one of the most beautiful new towers to rise in Chicago in years.

Is this why the hole?
http://edwardlifson.blogspot.com/2006/11/momo-by-boha.html

Arthur Rubloff is spinning in his grave...

Unfortunately, that four story gap turned out to only be three stories. Gotta cut costs somewhere.