More on the sale of the Chicago Reader, the alternative weekly that gave me my writing career, which was sold yesterday (see yesterday's post) to Creative Loafing:
1. The Reader's Mike Miner reports on his blog on Wednesday's staff meeting with new owner 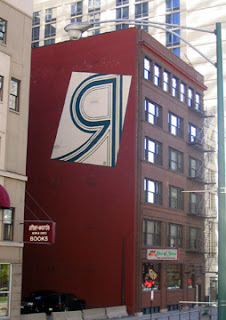 Ben Eason. While Eason told Miner his view of the importance of editorial was "It's everything," Miner seems less than convinced. "A newspaper, I think I read somewhere, is supposed to be a community talking to itself, and owners from a thousand miles away make an intrusive addition to the conversation." Only recently consolidated from four to three sections, the Reader will now become a single-section tabloid.
2. Editor and Publisher reports that, just as Conrad Black sold off the Chicago Sun-Time's prime riverfront site to Donald Trump, the Reader is being divested of a key asset - its real estate. The Hubbard Street loft building in which the Reader operates is not part of the Creative Loafing deal, but is being sold in a separate deal to InStep Software. On its website, a company named InStep Software LLC lists its Chicago headquarters address as 55 E. Monroe.
3. San Francisco Bay Guardian blogger Tim Redmond speculates the Creative Loafing deal had to involve at least $25 million.
4. Pepsi or Coke? Both E&P and New York City's Gawker raise the possibility that just two mega-chains, Creative Loafing and Village Voice Media, may wind up essentially controlling alternative weeklies throughout the nation.

So here's what we're left with. One emerging chain of alternative newspapers, Village Voice Media, based in Phoenix. A second, Creating Loafing, run out of Tampa. Assurances notwithstanding, how much can these managements have their fingers on the pulse of their flagship cities of New York and Chicago?

Newspapers traditional role as engines of local identity is being rapidly eroded. In our market economy, efficiency is all. While Macy’s or the Tribune Company may talk of consistently and reliably high quality being the result of standardization, the more likely result, as mandated by the supply chain, will be the lowest common denominator they think consumers can be induced to tolerate.

Macy’ service and standing among consumers won’ be improved by its just announced policy to cut associates’ pay, down to the lowest tolerable denominator, but if parent Federated Department Stores thinks it will give a quick shot to the bottom line, no matter how short-lived, who cares?

The Tribune Company is loading up with billions of dollars of debt in a buyout deal where the cash goes to Sam Zell and his partners while the employees are left holding the bag. As the nominal owners of the company under an ESOP (Employee Stock Ownership Plan), their principal holding will be a mountain of IOU ‘s so overwhelming that, more than likely, it will soon send the corporation careening towards bankruptcy. Will Ben Eason ‘s investors be any more patient in expecting what they consider an adequate return on their $25 million stake? Can there be enough cuts to satisfy that beast?

Eason appears to smitten with the old media idea that the way to conquer the web is to throw money at it. ""You need money and manpower to compete on the Internet," E&P quotes Eason as saying. "I can sit there and publish in four markets and let every venture capitalist guy in Silicon Valley fund some fresh new start-up and come after us or we could go and do our own national company and get out in front of them."

Of course, most Internet phenomenons started out as almost guerrilla-like operations. Think Craigslist. The very mention of its name raises terrors in the hearts of old media, but it had its genesis in the actions of just one man, Craig Newmark, and as a hobby. It grew through the use of volunteers and contractors.

Old media types like Eason are always looking through the wrong end of the telescope. In his mind, if he bulks up enough, national advertisers will be so seduced by his massive corporate physique that they won't be able to keep themselves from throwing business his way. Oh, and now that you've got that all worked out, take a few seconds to figure out how to redesign the product to fit the business model.

The irony is that in obsessing over consolidating and homogenizing, old media companies blind themselves to the true power of the Internet. While their product is looking more and more interchangeable, the genius of the Internet is how easy it is to match up readers to content in a very individualized way. RSS, blogs and portals allow Internet users to make up their own newspapers from millions of different sources. The question is not how to take The Reader, or the Chicago Tribune, or even New York Times, to the Internet, but what professional news delivery should be in a wired universe. And the killer app isn't going to come out of a boardroom or an endless series of conferences with venture capitalists, but from a student center, or a rooftop deck, or a Starbucks, from someone with a laptop cruising the Internet with curiosity and intent.