Supertalling It
: Architecture critic Blair Kamin offers up a crackerjack story in this Sunday's Trib on the current rage in engineering skyscrapers, which involves a massive service core connecting to a ring of external columns through a series of "outrigger" walls that increase stability against the wind. All of these components are of reinforced concrete of varyingly large thicknesses.

In another sign that the Trib may finally be figuring out what web journalism should be, the on-line version of the story is not only as good as the print one, but better, despite carrying over key graphics, not in html or flash, but in a pdf file. The web version includes a video for 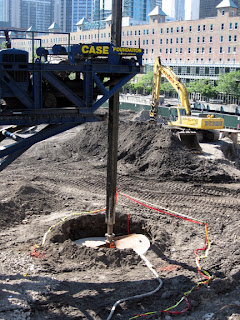 each of the 1,000-foot-plus-high skyscrapers Kamin covers.

The first is on Santiago Calatrava's Chicago Spire which, as we reported two weeks ago, is now actually under construction, with fourteen caissons, ten feet in diameter and up to 120 feet deep, being drilled into the ground on the site west of Lake Shore Drive between the Chicago River and Ogden Slip. Kamin, a vocal skeptic of the project's prospects, now says the activity "sure looks like it's real," although, even at a cool quarter-million dollars each, the cost of caissons represent little more than a drop in the bucket of the Spire's eventual $2 Billion on up price tag. We're still a long way from 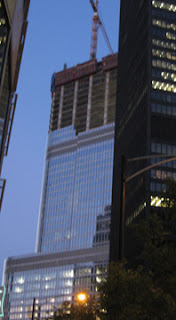 any guarantee that it will make it to the finish line.

The second video enlists Skidmore's master engineer William Baker as a tour guide of the construction of Trump Tower. At one point he enlists a visibly amused co-worker to demonstrate with their two bodies the basic core/outrigger technique.

The final video features Teng & Associates' R. Shankar Nair, structural engineer for the new Waterview Tower on Wacker, who reveals that a large part of the southwest quadrant of that structure is empty, slabless space, since the way it windowlessly abuts existing structures 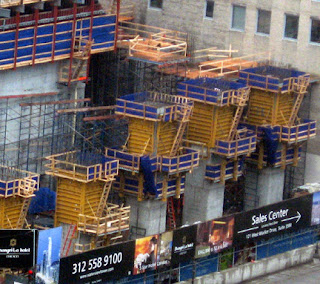 apparently offers so little in rental/sales value that it doesn't make economic sense to finish out the floors. It's just there to support the units constructed above it, at the point where actual views kick in. Nair explains the Waterview's own core/outrigger system.

It's all made to sound revolutionary, of course, but the thickness of the core walls - in case of the Waterview, up to four feet thick where it wraps around openings - evokes memories of John Wellborn Root's load bearing 1891 skyscraper, the Monadnock, and the core/outrigger technique seems pretty much like how Bertrand Goldberg built Marina City four decades ago. (I still remember how, as a small child, I was fascinated by the seemingly minuscule round concrete cores soaring up into the sky, waiting for a Jack to come by to climb them on his way to the giant's lair.)

Still, especially on the web, this is a marvelous piece, the kind that wins awards - and deserves them. (damn him). You can begin at the starting point here.

Ten Modern Masterpieces - when you're dealing with a slick monthly like Chicago Magazine, you can never be too sure that an article with a name like that won't just be the latest variation on last month's Ten Best Body Wax Salons, but when the writer is the always reliable Jay Pridmore, the result can be depended on to exceed expectations. Like Kamin's, 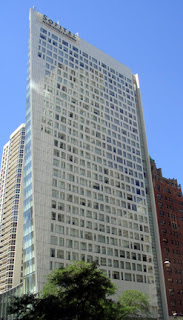 Pridmore's piece is light on analysis, and heavy on boosterism. That's what sells newspapers, and magazines. You have to keep in mind that even ten masterpieces can't make up for a pervasive cheapening of Chicago's architectural fabric. But drowning, as we are, in a contagion of dreck, its good to have Pridmore remind us that we're still capable of great things.

The Magazine also polled AIA Chicago for its picks, and got 140 replies that, when totaled, included only four of Pridmore's. The architects' alternative choices run 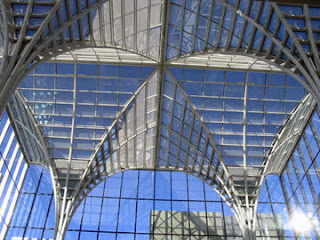 from the obvious (Goettsch's 111 S. Wacker - an even better building than UBS - and Rafael Vinoly's U of C School of Business, with its wonderful atrium that marries the lightness of a Chicago train shed with Frank Lloyd Wright's mushroom columns), to the credible (Johnson's Skybridge and Notebaert Nature Museum, Henry Cobb's Hyatt Center), to the inexplicable (Kleihues' Darth Vader mausoleum for the MCA).

You, too, dear reader, can go on-line and cast your own votes, both for the top ten, and for the ten you'd most like to see bulldozed. Write-ins welcome. (My vote would be for Rem Koolhaas's reviled Chicago Tribune McCormick Tribune Student Center at IIT, which made as much of a contribution to shaking up Chicago's moribund architecture as any structure on Pridmore's list.)

This is another case where the article, and its sidebars, are all adeptly presented on the Chicago magazine website. Check it out here.
(Click on time for permalink) 12:36 AM

The Trib can’t even seem to update Cubs’ score online in real-time, and they own the darn team!

I, too, was impressed with the Chicago Tribune coverage on "Outriggers and Masterpieces". I enjoyed reading Blair's explanations -- it's about as close as I'll get to being an architectural engineer! Separately, thanks for your blog and keep up the good work.