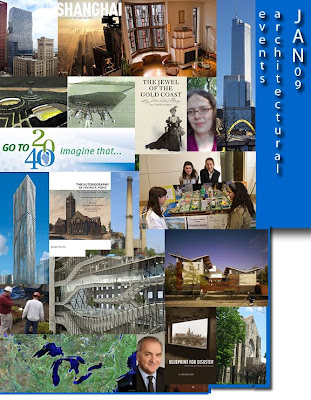 With IIT and UIC still rather quiet, architect's lectures are at a premium, but the MCA brings in Corie Sharples of SHoP Architects in for a lecture on the 19th. Michael Repkin and Dave Hampton of Urban Habitat Chicago will talk on The Wonderful World of Malcolm Wells, the visionary eco-architect who died this past November, (after writing his own obituary, which you can download here.)

The Chicago Architecture Foundation's Wednesday lunchtime lecture will be dominated by great new books and their authors: Sally Sexton Kalmbach discusses her new portrait of Bertha Palmer, The Jewel of the Gold Coast, D. Bradfort Hunt, Chicago public housing's Blueprint for Disaster, and Richard Cahan Edgar Miller and the Handmade Home. And Sprawl's Bob Bruegmann closes out the month talking about Chicago's Great Planning Disasters while still managing to keep it within 45 minutes. CAF also offers Jonathan Boyer of Farr Associates on the Yannel Net Zero Energy Residence and Shaw Technology and Learning Center. For SAH Chicago at AIA, David Swan lectures on his work bringing The Autobiography of Irving Pond to press seventy years after Pond wrote it. Jay Pridmore discusses his striking book, Shanghai: The Architecture of China's Great Urban Center, at AIA Chicago.

Howard Hill of Wiss Janney talks about the I-35W Bridge collapse at SEAOI's monthly dinner meeting. On the 16th, there's the 2010 Chicago Regionals for the Future City Competition, featuring the visions of talented 7th and 8th graders. Friends of Downtown sponsors a preview of Roosevelt U's new 32-story dorm, by VOA, and SOM unveils its vision for the water of the Great Lakes at AIA Chicago

And, as, they say, there's more, much more. Check out all the nearly 50 January events here.