How sad it is to contemplate that the life of Mies van der Rohe was cut short before he could appear on a contemporary TV game show. Deal or No Deal with Herbert Greenwald. Jeopardy with Walter Gropius ("Artist-Obsessed Consorts" for $1,000, please Alex), and Philip Johnson, simply making up answers and conning the judges. Dancing With the Contractors. Dr. Phil, 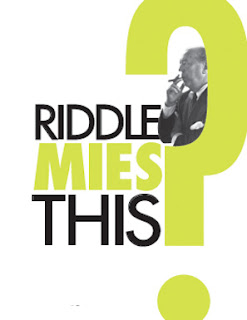 with Edith Farnsworth. Not to mention guest shots on drama's such as The House Whisperer, CSI: Moisture Inundation, and The Metalist.

On Thursday, March 25th, to honor what would have been the architect's 124th birthday, the Mies van der Rohe Society will work to remedy this tragic omission with Riddle Mies This, their annual benefit, promising "an evening of cocktails, hors d'oeuvres, and . . . a rousing round of trivia, hosted by WTTW's Geoffrey Baer, with a roster of trivialists including Lee Bey, Kevin Harrington, Edward Keegan, Edward Lifson, Donna Robertson and Edward Windhorst, and "guest experts" Dirk Lohan and Franz Schulze.

It's one of a number of great new additions added to the March calendar. Also at IIT, David 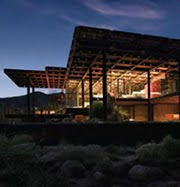 Hovey, Jr. will be lecturing on The New Meccano Set: The Development of the DCHGlobal

Building System on the 22nd, and Kengo Kuma will talking about recent work on the 23rd. The Richard H. Driehaus Museum, in the Nickerson Mansion, kicks off its inaugural lecture series, The House Beautiful: Magnificent Interiors of the Gilded Age, with a March 25th lecture, Living in Style: The Development of the Interior Decorator in the Gilded Age by Nina Gray,

Independent Curator and Consulting Curator for New York's Park Avenue Armory. On March 15th, the Hafele America Showroom will host a seminar on Interior Glazing, while the Peter Hales lecture at UIC, also originally set for the 15th, has been rescheduled to April 5th.

Overall, there are over 30 events still to come on the March calendar. Check them all out here.

And then there's Beautiful City, a new play about - well, let's let them tell it:

(A) darkly comic fable about architects, urban developers, crime families, law enforcement, and even a witch, all fighting for the soul and vision of a city. Set in an 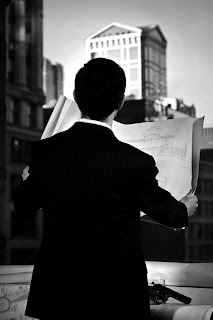 Beautiful City centers around Tony Raft, a developer from an organized crime family (yeah, right, like that could happen), and his vision for the city - one that includes a hermetically sealed live/shop/work mall connected by exclusive underground tunnels to shield the well-heeled from the truth of poverty and despair. The only problem is not everyone shares his vision. His prized architect Paul contracts a mysterious illness and is missing in action. His mother, Mary, the head of the mob family considers his vision a distracting waste of energy and money. Low-level street thug Rolly is stealing from him. Gina Mae, a witch, vows to fight against the corruption of her city. And detective Dian tries to maintain a semblance of order and control in the city.

Written by George F. Walker, one of Canada’s most prolific and celebrated playwrights, the play premiered at the Factory Theatre in Toronto in 1987 and is part of a trilogy of Walker plays about the changing urban landscape.

Theater Mir is presenting the play at Chicago DCA Theater's Storefront Theater at 66 E. Randolph, Thursday, Friday, and Saturday evenings at 7:30 pm and Sunday afternoons at 3 pm, through April 3rd. $25 for general admission, $20 for seniors, and $15 for students. More information on-line.

What an interesting blog, introduced by a thought-provoking photo. The unusual wall painting of the dwellings is also a strangely modern interpretation. Something like this hieroglyphic view of a park by Swiss painter Paul Klee, http://EN.WahooArt.com/A55A04/w.nsf/OPRA/BRUE-8LT475.
The image can be seen at wahooart.com who can supply you with a canvas print of it.