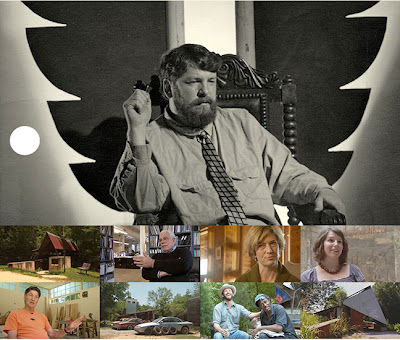 The documentary Citizen Architect: Sam Mockbee and the Spirit of The Rural Studio had its broadcast debut on PBS August 23rd, but not on Chicago's WTTW.  I'm not sure they ever ran it - probably no room amidst all the rebroadcasts of Change Your Brain and Celtic Thunder.

This weekend, however, you'll have three chances to catch the film at the Gene Siskel Film Center, Friday the 24th at 8:00 p.m., and Sunday the 26th at 3:15 and 4:45 p.m. Also included on the program is the 17 minute film Robin Hood Gardens (Or Every Brutalist Structure For Itself), on Alison and Peter Smithson's now doomed 1972 London housing development both hailed as a masterpiece and assailed as an eyesore.
﻿﻿
Not to be outdone, Chicago Filmmakers, 5243 N. Clark, 2nd floor, is presenting Chicago Architecture in Motion, Saturday, September 25th at 8:00 p.m. The seven short films including Equitable Building: Time Lapse from the 1960's, Beverly Willis's Girl is a Fellow Here: 100 Women Architects in the Studio of Frank Lloyd Wright, and Conrad O. Nelson's traversal of Halsted Street, from 1934.