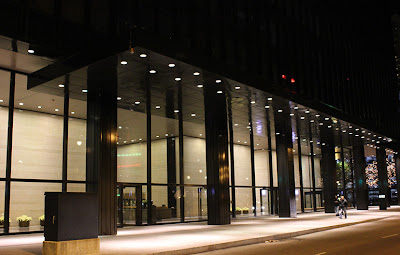 click images for larger view
The architecture of Mies van der Rohe is all about openness and sweep, but try to tell that to the current owners of his classic IBM Building, now known by its address, 330 North Wabash.

The preliminary report from the Commission on Chicago Landmarks. issued just before the property became officially designated, referenced "first-floor lobby interior" as one of the structure's historical and architectural features meriting protection.  Apparently something got lost in the translation.  On Monday, I took these pictures of metal framing and drywall going up to partition off the north end of the lobby, where doors and windows have been covered in brown paper to avoid prying eyes.  The Landmarks Commission has been reviewing and approving multiple noncontroversial renovations to 330, mostly on the upper tenant-occupied floors, but also including the recently completed accessible ramp to the plaza off of State and a future additional canopy for the hotel finally going into the space.  I was unable to find any authorization of this construction in the most recent permit review reports. 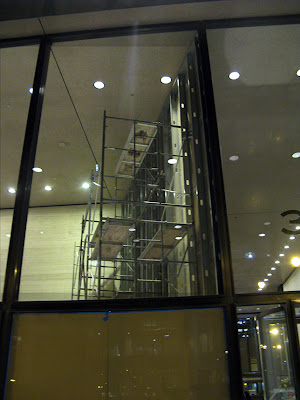 In December of 2010, Hong-Kong based Great Eagle Holdings announced that they had acquired floors 2 through 13 of 330 N. Wabash for a new 216 room Langham Hotel.  The office portion of the structure is also doing well, on track to being 84% leased after recently landing some major new tenants, including the American Medical Association, in a deal - according to Crain's Chicago Business - that includes naming rights to the building. 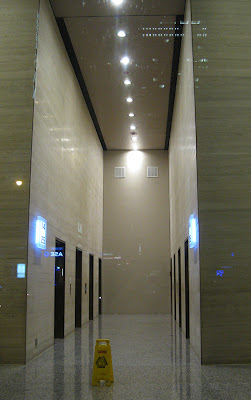 Please, someone tell me these new lobby walls are only temporary protection, or that the drywall will be replaced with glass, but I fear they look a little too solid to be anything less than permanent.  Give it a decade or two and another owner will rediscover the value of putting it all back to Mies's original vision. 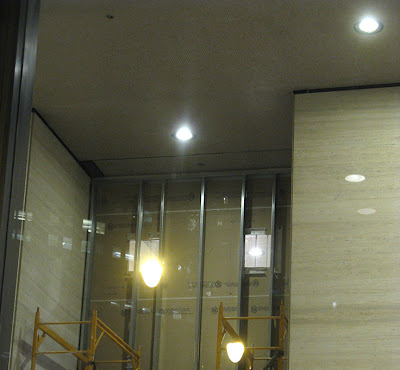 Jack,
do you have any info on just have temporary and why it's necessary?
thanks

I think this is a good illustration of the difference between a blogger and a journalist. A journalist would have called the owner or architect and possibly made a FOIA request to see approved plans. Then they could write a scathing article. Or not.

A journalist also gets paid, although that may be going by the wayside. Ask the CNC.

And please tell me, as you've apparently got this all figured out, how exactly do you submit a FOIA request to a private company?

The post was based on incontrovertible physical evidence. Walls have been constructed in the lobby. That is a fact.

Since I am not a "journalist", it is not my responsibility to search out an excuse to explain away an ugly intrusion into a landmark building. I guess you're not, but I'm bored to tears with news stories where "journalists" waste their readers' time with paragraphs detailing all of their heroic but unsuccessful efforts to get someone to talk to them.

As I wrote in the post, I will gladly publish any official information as to what's actually going on at the IBM and how long it will last.

No insult intended. But I'm not sure your readers understand that you don't have familiarity with the approved plans (99.99% of Chicago is in the same boat) and you haven't investigated in order to determine if your accusations have merit. You may well be entirely correct but it's just as likely that you're not. Perhaps you should have explained that your post was a request for additional information.

And yes, you shouldn't FOIA the owners, but there was a public hearing with the city where conceptual plans were submitted. But as far as that goes, it's impossible to determine if a project that has just begun will eventually match all approved plans.

And you may not like the plans even if it's executed with fidelity. That's an article in itself.