Not (Birch Burdette) Long for This World? Century-Old Mariano Park out for Bid


Recently, reporter Felicia Dechter had news about Mariano Park, the sliver of open space at State and Rush that puts the triangle in The Viagra Triangle, the name given to a collection of upscale restaurants and bars where it's said unnaturally tan older men with the appearance of money meet improbably endowed far younger women in search of it.   And while the particulars of that urban narrative may be exaggerated, the dynamics of the actual triangle are what make any public space successful.  It's at once magnifier and release for human interaction, encouraging both active engagement and passive observation.

According to Ms. Dechter, at the end of last year, Whispers Café's contract with the Chicago Park District expired.  For 13 years, Whispers provided Mariano Park with tables, chairs and benches, washed the park daily, and steam-cleaned it bi-weekly.  The Café  won awards for its maintenance and gardens.

Well, we don't need those kind of people, do we?  Dechter says the Park District is looking to ramp up the monetizing of Mariano Park, with previous rumored suitors including Gibson's Steak House and Connies Pizza, with indications a new deal might include demolishing the park's pavilion for a much larger, more lucrative building. The Chicago Park District has issued a "Concession Opportunity Notice of Availability", with bids due by February 20th, and will be holding a Prebid meeting for potential new vendors this Wednesday at 1:00 p.m.
This model of "improvement" has already been inflicted another public space triangle just a few blocks to the south.  Connors Park had a charming pergola and fountain, which were demolished after officials declared that, in one of the most well-traveled areas of the city, they couldn't keep derelicts from vandalizing the park and its seating.  Their solution was transform Connors from a park to a big Argo Tea building with a greenspace attached to it.  Part of the agreement with Argo was that the seating both outside and inside the building would remain a public park, accessible to all, but it certainly doesn't read that way to passersby.  The ambiguous quality of the reconfigured park was confirmed by complaints by neighborhood residents of being told to leave by Argo staffers when they hadn't made a purchase.  New signage was installed stating that both the park and the Argo Tea interior were property of the Park District, and open to the public.
If the city and the Park District has something similar in mind for Mariano, it would be a major misfortune, as the park is rich both in structure and history.  The park was acquired by the city as far back as 1848, and was previously known as Green Bay Triangle in homage to nearby Clark Street's original identity as Green Bay Trail.  In 1931, it was renamed Rehm Arbor after brewer Jacob Rehm.  The property was transferred to the Chicago Park District in 1959. In 1970 it was renamed once again for nearby resident, newspaperman Louis Mariano.  Long before sportscaster Harry Carey inherited the title, Mariano was known as "The Mayor of Rush Street." 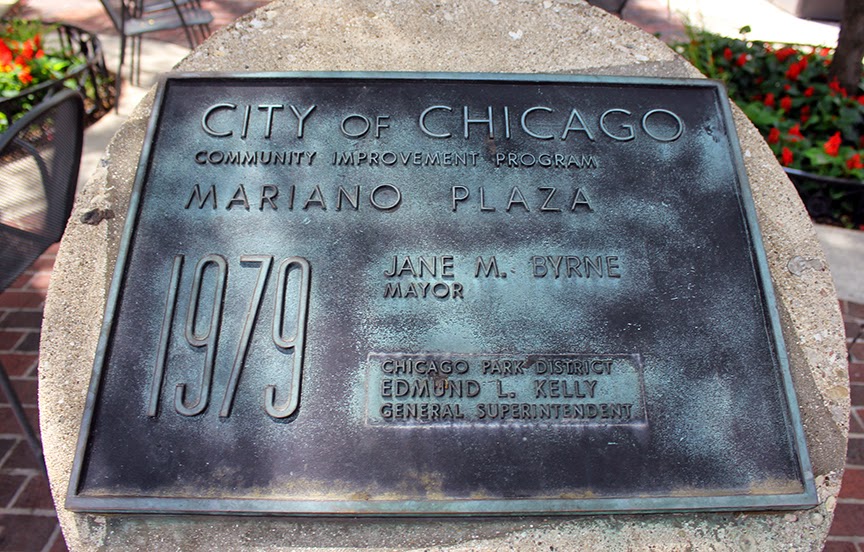 Mariano Park's pavilion dates back to the turn of the 20th century. Lucy Fitch Perkins, wife of architect Dwight Perkins, was chairman of the Committee of the Art and Literature Department of the Chicago Woman's Club.  The Club committed $1,000 to build out Mariano, and collaborated with the Chicago Architectural Club in a competition for its design.  Pratt and Lambert donated $50 for the prizes.

Proving that the gratuitous use of all-caps didn't start with email, the Tribune wrote at the time that "The idea of utilizing as sites for statues, fountains, and other monuments the small, triangular spaces which abound in Chicago at the intersections of diagonal streets was suggested in THE SUNDAY TRIBUNE fully two years ago."  The paper reported that three prizes had been awarded, but by general consensus, the best design was one eliminated from consideration because the judges determined it couldn't be built for the $1,000 at hand. 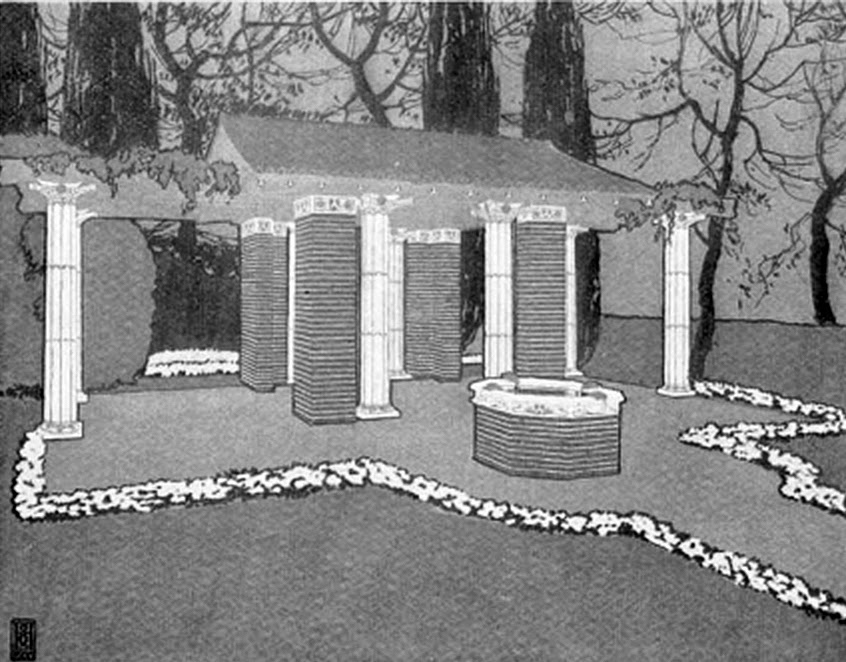 That design was by Birch Burdette Long.  Born in Columbia City Indiana, Long is almost completely forgotten today, but he was one of Frank Lloyd Wright's original employees.  Along with Marion Mahony - Wright's first hire - they are said to have largely created the Japanese-influenced style of architectural delineation that would help make Wright famous through the world.

Long became highly respected for the quality of his renderings, which included a handsome competition concept for a new crossing for the Illinois Central tracks at the Midway Plaisance. Eventually, he moved east, spending many years working for the Architectural League of New York. In 1922, he established the Birch Burdette Long Sketch Competition.  It became Long's memorial after he died of pneumonia while mounting an exhibition for the Architectural League in 1927. The juried prize was awarded annually until 1972, when it was discontinued "for lack of interest in architectural illustration." 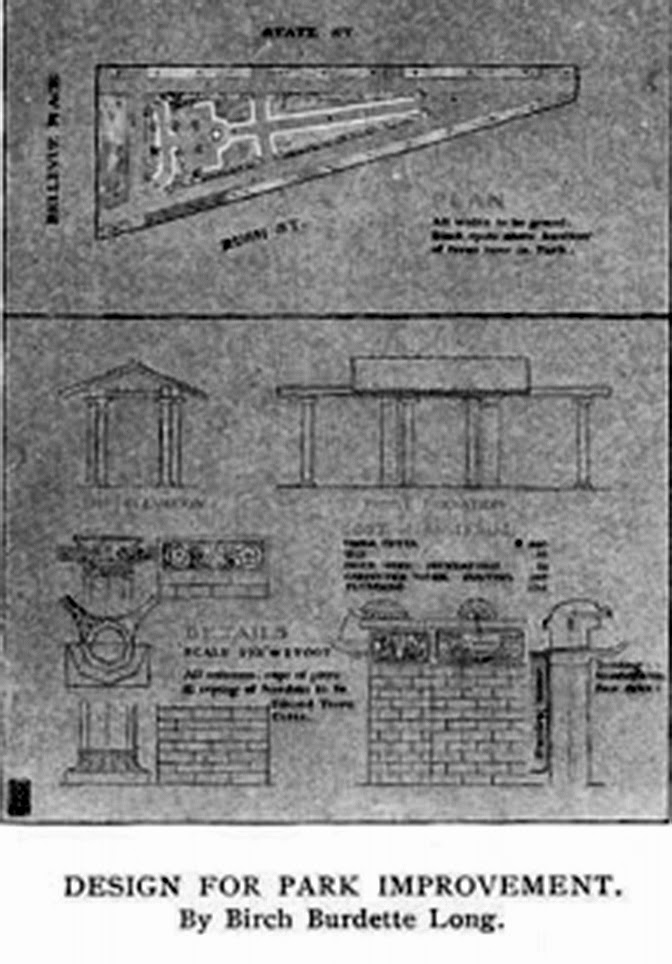 Long won the Mariano Park commission while he was still a draftsman in Wright's office.  That caused some friction, as a reporter learned from a conversation with Long for a story in The Brick Builder some years later.  According the article, Long's design was . . .


. . .  even more outre than Wright's work: the columns were striped red and white, like candy poles; the roof was a combination of Japanese and "Chicagoese" architecture, and when it was finally built in a rather prominent location, nobody knew what to to make of it - in consequence nobody liked it much.  The papers had letters about it, even editorials regarding the disfigurement of public property, and yet from the photographs of the structure which the writer has seen, it seems to have been a very charming and appropriate little building, not easily to be classified under one of the architectural schools, perhaps, but filled with a playful charm and gaiety of composition which may be singularly appropriate to its position and its purpose.

An unnamed spokesperson for the Women's Club said Long's concept was selected "because it seemed best suited to the conditions, and was distinctly original and not merely a conventionalizing of some old-world model"  While a fountain was included in Long's design, the one at the park now dates only from 1998. 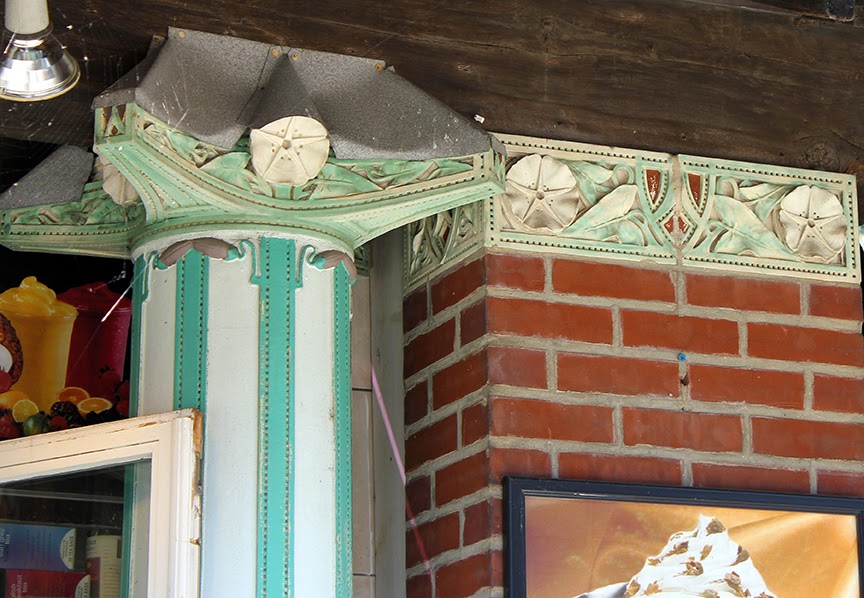 Although partially obscured by signage, Long's pavilion looks very much the same today.  It does not overwhelm the park, which could mean that its days are numbered.  It has no landmark protection. 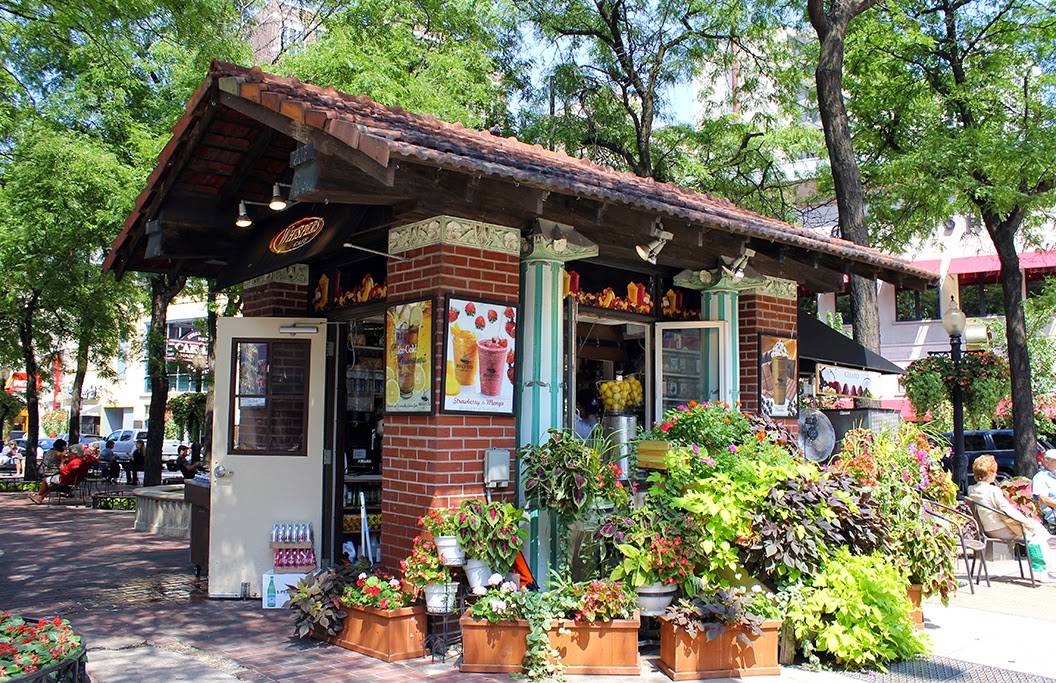 Long's small structure has witnessed over a century of Chicago history, seeing its Rush Street environs evolve from houses on generous lawns, to upscale apartments, to a red light district with some of the city's best known clubs, to Viagra central, to today, when it's becoming a release valve for upscale retailers spilling over from Rush Street, with Dior slated to take over the Urban Outfitters store two blocks down the street.

Yes, the city needs revenue.  Yes, the people need more high-end tea, and coffee, and gelato. (They seem to have become a lingua franca of urban revival.)  Just not so much as we still need continuity and connections to Chicago's history.  Just not so much as we need, more than ever, places where human scale still endures amidst the booming and often depersonalized hyper-density rising around them.  Places like the small oasis of open urban space that is Mariano Park, centered in time and scale by Birch Burdette Long's quirky, gracious pavilion. 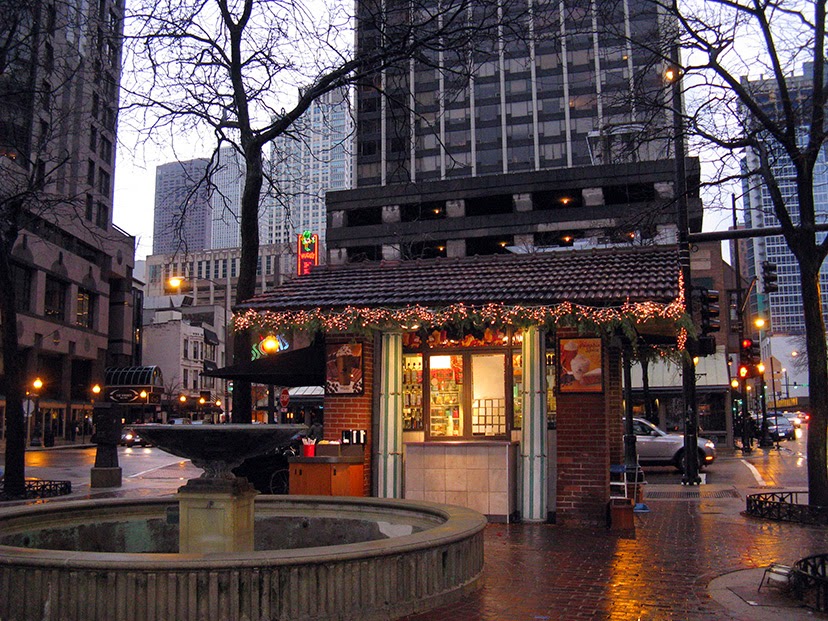 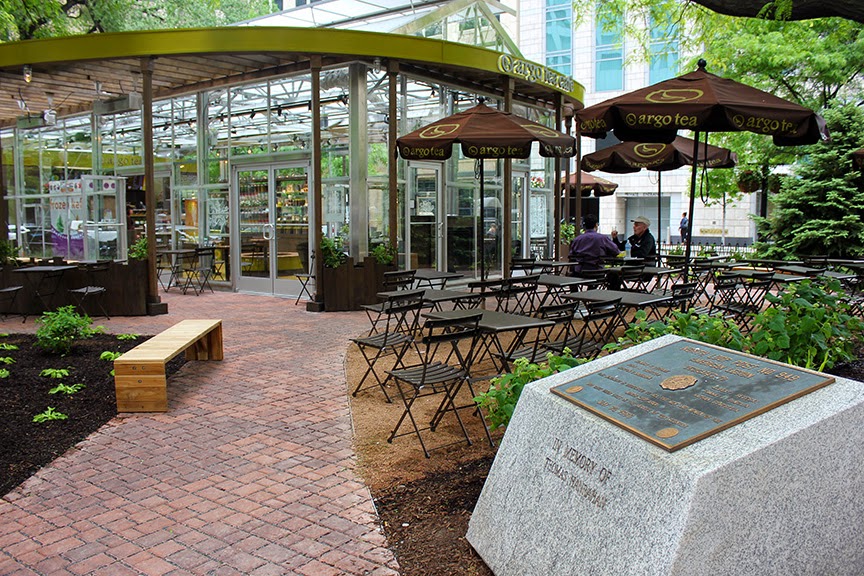 Destroying a Park to Save It: The Tea House that Ate Connors Park 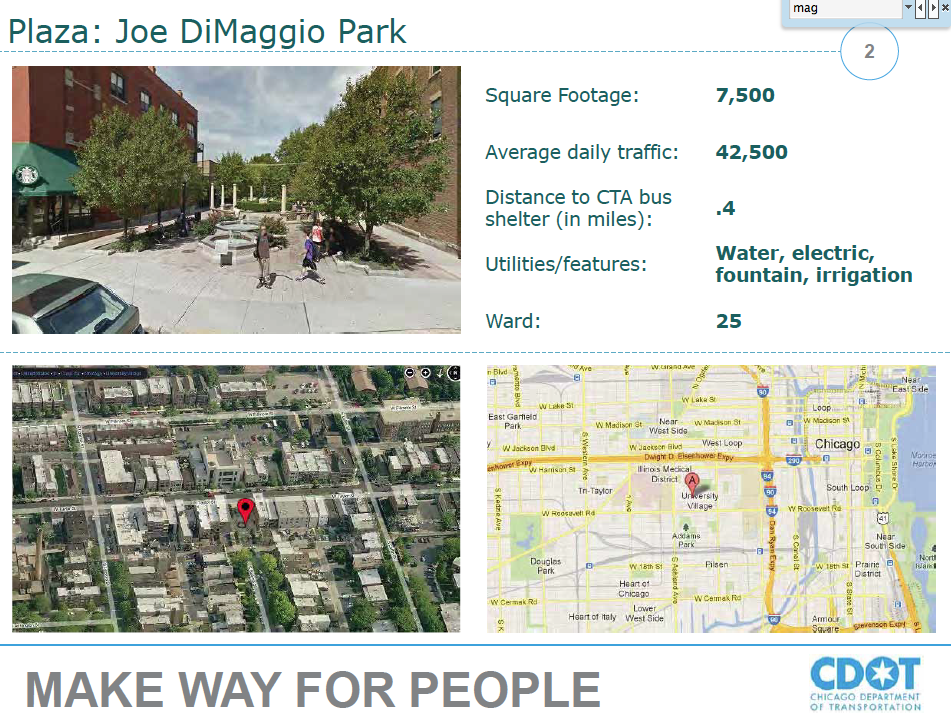 Would be a shame to see this park disappear. Great spot to enjoy a beautiful sunny Chicago day, and people watch.

Why you say such a thing about map? Would be a shame to see this park disappear. Great spot to enjoy a beautiful sunny Chicago day, and people watch?

Would be truly sad to see this building and current setup changed. It's such a great spot to sit on nice days... One of my favorite areas downtown.

Gibsons is trying to remove the hut and the fountain. Say bye bye to any public space in this city...