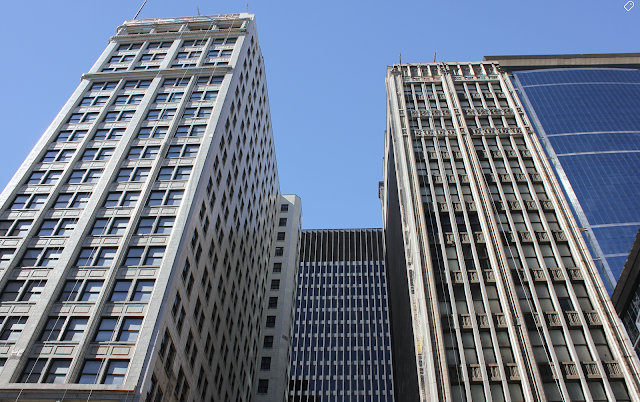 I am writing to strongly oppose the proposal to demolish two classic skyscrapers in downtown Chicago.  This proposal is unacceptable on several levels.

1.  The Consumers and Century buildings are indispensable landmark-quality structures that typify Chicago architecture. The Consumers is from the distinguished Chicago firm of Mundie and Jensen, and is an elegant terra-cotta clad tower that typifies the great Chicago architect Louis Sullivan 's definition of a skyscraper as "a proud and soaring thing".  The Century Building is from another historic firm, Holabird & Roche, and marks the transition from the original Chicago School or architecture, to Art Deco. It's Neo-Manueline terra cotta ornament is unique.  It holds down its corner with power and grace.

2.  The Security justifications for demolition of these buildings are, to be frank, specious.  While one never wants to minimize the concerns of members of our Judiciary, those concerns cannot be allowed to govern policy solely on the grounds, not of reality, but of power.

The Consumers and Century are claimed to be an existential threat to Federal employees, yet only yards from the Dirksen building stands the Berghoff restaurant building, whose roof would provide a dangerous staging area for those looking to inflict harm.  More to the point, directly across the street is the Citadel Center, a glass-clad tower whose south facade opens vistas directly into the windows of the Dirksen Building.  As Citadel is winding down its Chicago operations, the possibility of unoccupied floors grows.

Even more importantly, the range of a common hunting rifle extends up to 400 yards, a long-range rifle double that distance, which means the same threat claimed to be presented by the Consumers and Century is also presented from a large number of tall buildings, privately-controlled, on the periphery of the Dirksen Building, including the glass-facaded former Home Federal Building on State (which ironically would have a clear view of the Dirksen Courthouse should the Consumers and Century be demolished), the Bankers Building (many floors of which are dedicated to transient hotel rooms), the Edison, Marquette and former Continental Bank buildings.  This, of course, would also apply to a terrorist seeking to launch an incendiary device.

The Consumers and Century Buildings have lived in peaceful co-existence for over half a century, ever since the Dirksen building opened in 1964.  There has never been, at least in Chicago, a single federal judge or employee killed or injured from a sniper shooting from outside their building.  The sad reality is that in the one case where the family members of a judge were tragically murdered, it was not at a work site, but at their residence.  In the case of incendiary devices, it should be remembered that Timothy McVeigh did not drive into the Alfred P. Murrah building to destroy it, but simply parked next to it on the street.

Benjamin Franklin famously wrote that a nation willing to trade away liberty for a little temporary safety deserves neither Liberty nor Safety.  To apply this to the present case, what is being proposed is trading two essential pieces of Chicago's urban fabric for a "security" that is both illusionary and dangerous.

3. Both structures are essential contributors to the State Street Streetwall.  Although the promise is to replace them with a park, their demolition would be the equivalent to the wholesale damage done to the center cities of the United States by destroying historic structures for parking lots, like pulling front teeth and replacing them only with painted gums.  More to the point, the proposal to change the Dirksen Building entrance to one off of that State Street park would destroy the entire concept another famed architect, Mies van der Rohe, developed for the Federal Center, in which all three buildings - the Dirksen Kluczynski and Post Office - revolve around the great plaza on Dearborn Street to create a sustaining civic space.

4.  The GSA was already at the point of approving a developer's plan to restore the Consumers and Century buildings as residential structures, when, inexplicably, the rug was pulled out from under them at the last minute.  Despite the GSA's long, often indefensible, laundry list of provisos in its request for comments, I still believe that was a viable plan, with security requiring approval - or even control - by the GSA.

However, local preservationists have presented proposals that meet all of those provisos, turning the buildings into document archives and other back-office operations, with the GSA in full control of security including removal of windows and other modifications where required that do not vandalize basic design integrity.  The GSA should accept these proposals.  The $52 million already earmarked for their destruction should more than cover the cost.

Even a quick glance at the GSA's massive portfolio of properties demonstrates its proud history of enhancing America's cities with superior buildings, including both Mies's Federal Center, and, more recently the award-winning replacement for the Murrah Building designed by another great architect, Carol Ross Barney.  The destruction of the Consumers and Century would stand in stark opposition to everything the GSA's historic legacy stands for.

We can do better.  We must do better.  Save, repurpose and  restore the Consumers and Century buildings. 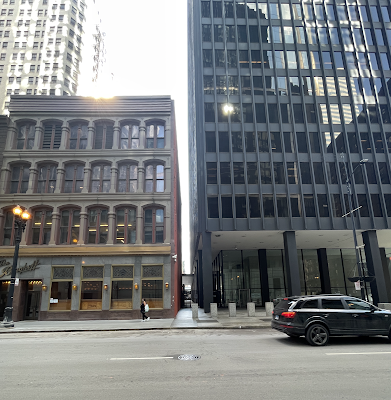 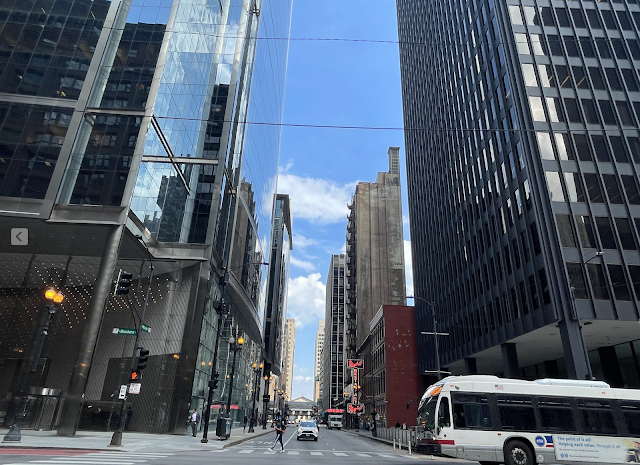 It's Delicious! It's Colorful! It's Fun! It's Plastic! Only through Sunday, The Plastic Bag Store comes to the Wrigley Building. 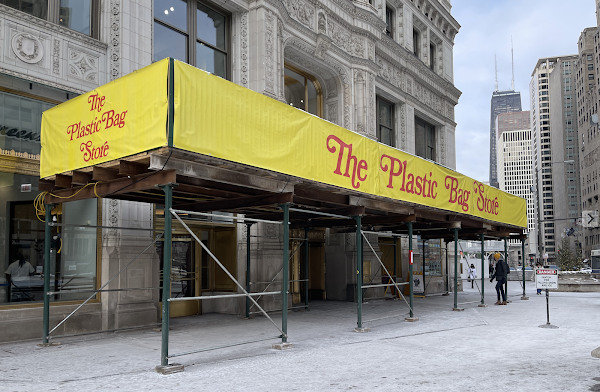 You have only through Sunday to see weird, wacky, very fun, but far from frivolous The Plastic Bag Store at the Wrigley Building. The "anchor attraction" of this year's Chicago International Puppet Theater Festival,    The store is stocked entirely with very real looking fruit, vegetables, fish and pastries, and packaged goods for parody brands - all made of washed and repurposed plastic bags and trash. 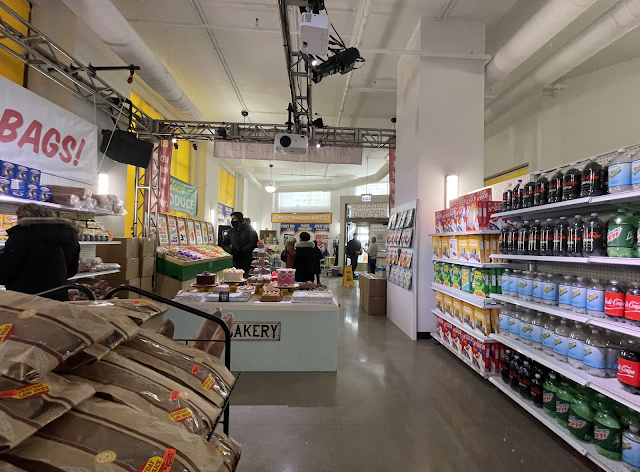 The creation of a team headed by Brooklyn-based designer, puppeteer and filmmaker Robin Frohardt, the installation also includes showing of puppet films - unfortunately sold out - in which an anthropologist far in future works to reconstruct the lost culture of the civilization of "the ancient customers", guided by a note placed in a bottle by Helen, a Met Museum custodian living today, and by the "millions of found artifacts" that are predominantly plastic, which, because plastic doesn't biodegrade, are the most common remnants of our culture to survive. 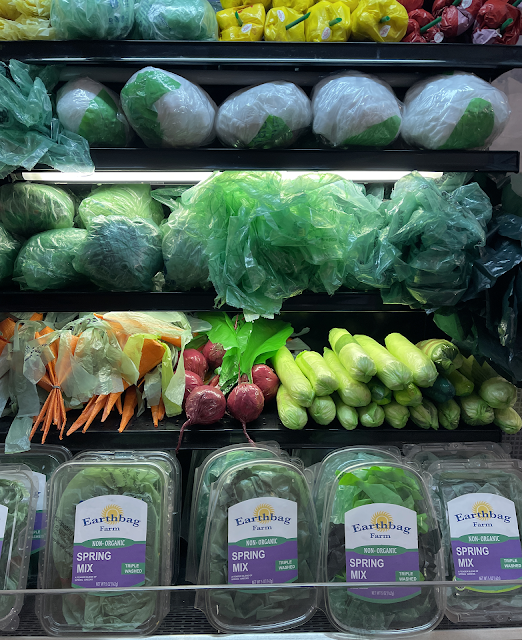 The Plastic Bag Store that you can visit at the Wrigley is, in concept, that future anthropologists reconstruction of what our society was like.
There's also magazines, and a "time machine" that allows you to put in a plastic bottle today and see what it will evolve into in a thousand years.  (Spoiler alert:  it's the same plastic bottle.)
The level of creativity is amazing.  The vegetables look just like vegetables, flowers, flowers, cakes and cupcakes, real pastries.  There's even a deli counter . . . 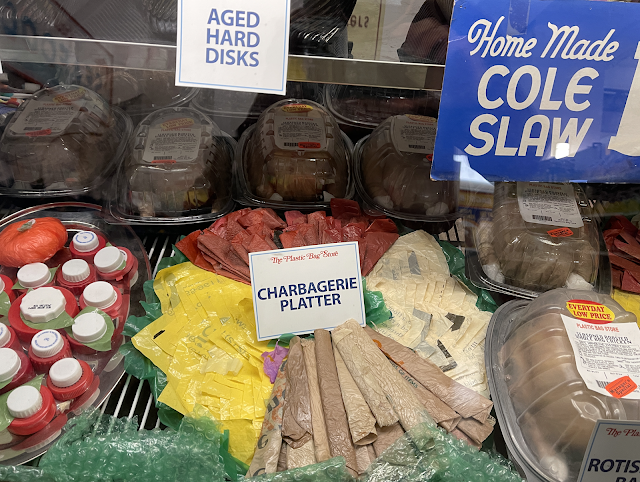 ... and a prodigious selection of packaged goods (be sure to look at the backs)  that is truly impressive and inventive . . 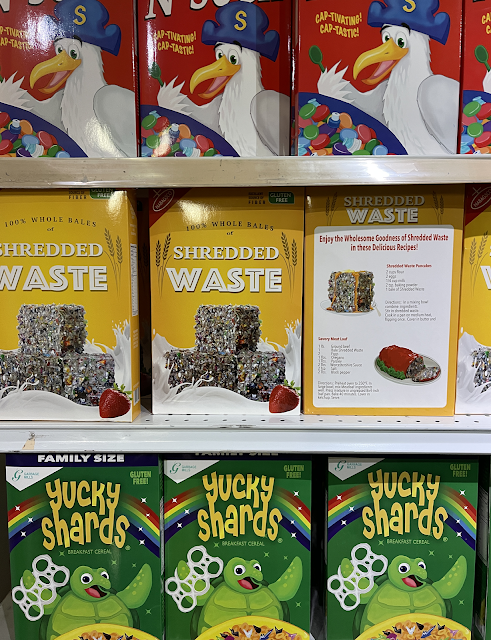 It took me back to my childhood, and to the Wacky Packs that were a really big deal among 7-10 year-olds of my generation. 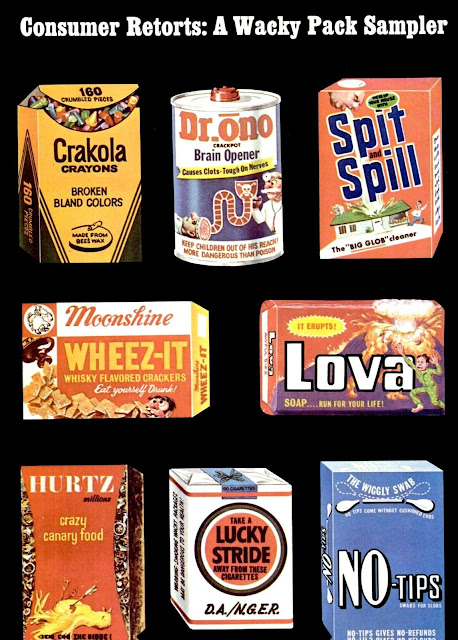 They were inserts trading cards - later stickers - that came with nickel packs of Topps bubble gum that offered up parodies of popular brands and their packaging.  For my demographic, they were snarky-fun high-culture. 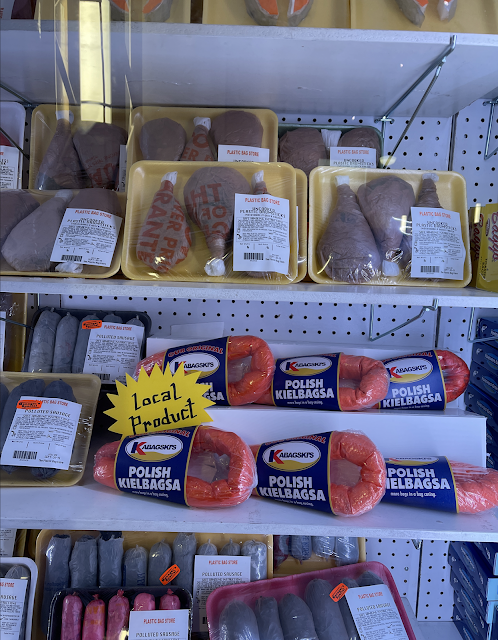 Originally exhibited in Times Square, it took a year to create the over 10,000 objects in the installation. "I collected bags from friends and family members," says Frohardt in her Youtube video.  "I had people save things, I rescued bags the street, I pulled bags from the trash, I pulled them from recycling bins. And then we designed all the packaging.  We had to wash every bottle, and label them." 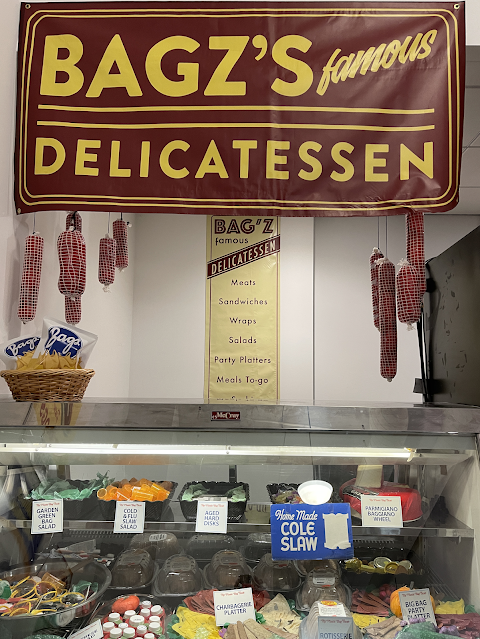 "My aim, "she says, "isn't to make people feel bad. My aim is holding up the mirror and highlighting the absurdity of all this, and fueling the fire of public outage over all this."
Indeed, you won't find any any numbers or charts at The Plastic Bag Store.  "I didn't want to overwhelm with statistics," says Frohardt, "but more just wanted to create a kind of familiar, visually tactile experience that [people] could relate to or understand in a more visceral way than just a bunch of numbers."
Still, the facts are staggering:
The world produces 5 trillion plastic bags a year.  No more than 3% are recycled. Plastic doesn't biodegrade.  It breaks down into ever smaller pieces of itself, with an increasing toxic effect on living things.  Parts of north Pacific are estimated to hold six times more plastic than plankton.  Ingested as food, often increasingly scarce, it can kill from blocking the digestive system or poking holes in organs.  UNESCO estimates 100,000 marine mammals die each year from plastic pollution.  Of 61 dead whales found in the Phillipines, 45 of the deaths were traceable to plastic ingestion.  One young whale was found to have 88 pounds of plastic in its stomach.  The Great Pacific Garbage Patch floating landfill, twice the size of Texas, is mostly made up of plastic. 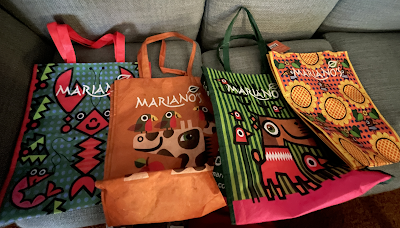 There are alternatives.  I have my own collection of David Lee Csisko reusable bags, "made from 100% post-consumer recycled content . . . the equivalent of three plastic bottles" to cut down on plastic bag use, but sometimes I forget to bring one with me, and I'm back to sin.  New York City passed a controversial ban on plastic bags in 2020.  In Chicago, we have 7 cent "plastic bag indulgences".
Will we ever get our act in order?  Doubtful.  Remember that decades ago we had a perfect recycling system for pop - glass Coke, Pepsi, etc. bottles that you paid a deposit on, and returned to the store for a refund, but we were too cheap and lazy to lug the bottles back and forth once we could get our beverages in eternally polluting plastic.  "Efficiency," they said.  "More hygenic," they said.  And we said, ".... yeah, why not!"

So, in summary, we're killing our fellow animals, the environment, the planet, and, eventually, ourselves. But what a way to go! 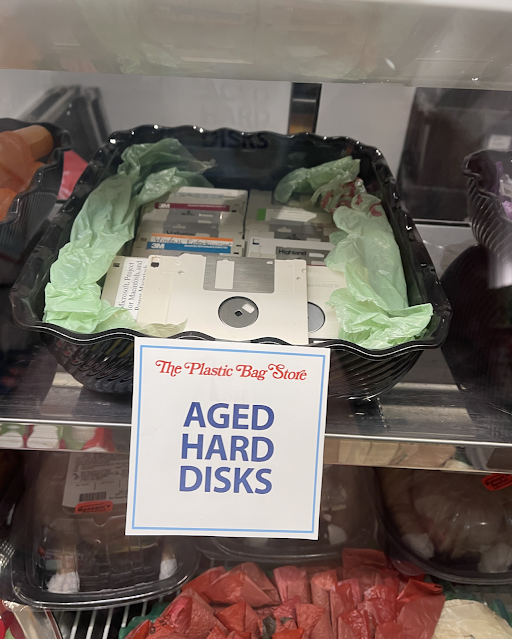 Again, you have only through this Sunday, January 30th, to see the spectacular The Plastic Bag Store at the Wrigley Building.  Frohardt and team will show you a really good time, and you won't even have to think about the sobering implications of her non-guilting, deliciously colorful fun-ride.  But plastic leaves an aftertaste, and odds are, sometimes afterwards, you will.
(Click on time for permalink) 11:26 AM 2 comments: