The Nine Lives of St. Boniface - Historic Church Architecture at the Crossroads 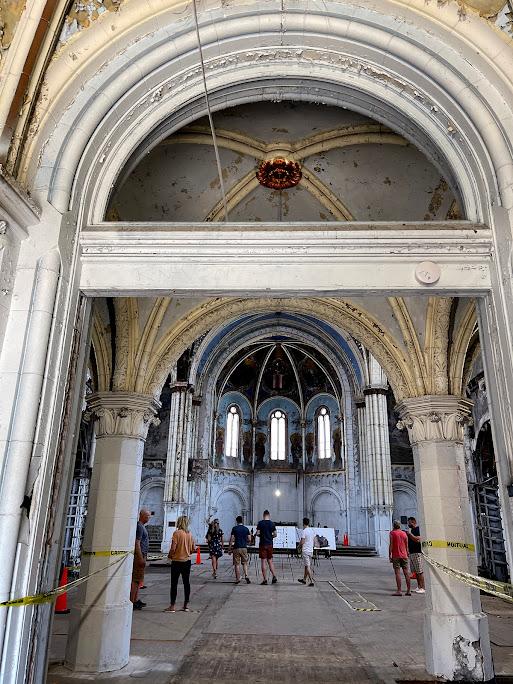 (Note: to just flip through the pictures in large view, simply click on any one of them.)

S
aturday, June 12th, developer Zev Salomon gave the Noble Square neighborhood a last chance to view the ruined interior of St. Boniface before it's gutted to create The Boniface, 18 condo units within the church's structure. 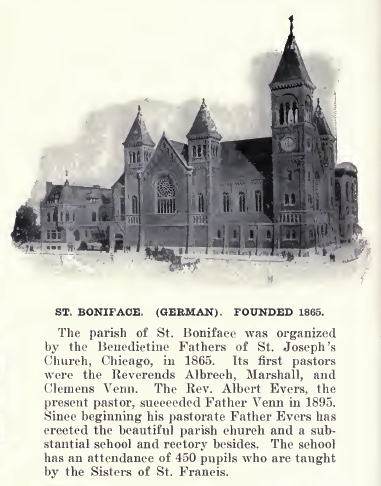 Founded by German immigrants, St. Boniface started with a small wooden church in 1864, graduating to the grand new building designed by prominent church architect Henry J. Schlacks.  It offered its first Mass on Christmas Day, 1903,  with construction completed the next year.

In 1990, St. Boniface was among the 28 parishes closed by the Archdiocese of Chicago.  The windows were boarded up, the 1908 Hann-Wangerin-Weickhardt organ removed.

The history of the next 30+ years was a roller-coaster leading nowhere, extensively documented on the Saint Boniface Info website here.  The building was under the jurisdiction of two successive aldermen.  It was listed as a "Most Endangered" structure by both Landmarks Illinois (1999) and Preservation Chicago (2003 and 2009), who teamed up with community groups in ongoing efforts to save the building.

In 1999, the Archdiocese announced plans to demolish the church.  250 people showed up in the rain at a "Stop the Demolition" rally, organized by The Coalition to Save Saint Boniface.   A hold was put on demolition.  An ordinance for the city to buy St. Boniface goes nowhere.  In 2002, the Archdiocese announces its attention to sell the property.  They demolished the parish school and put the facade into storage. 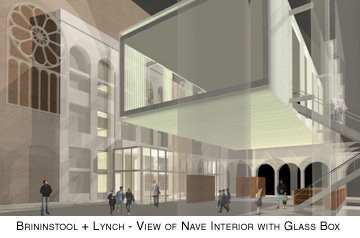 In 2003, The Archdiocese holds a design competition with submissions from such prominent Chicago firms as Booth Hansen, A. Epstein, Brininstool+Lynch, and Studio/Gang, whose concept coupled new residential towers on the side of the now demolished school with saving the actual church space as a meetings and event space. 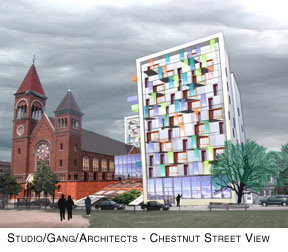 At a 2005 reunion mass and dance, an Archdiocese representative declared none of the competition's entries were viable, no money would be spent on St. Boniface, and community organizers could have it if they'd just cut a check for $3,000,000. 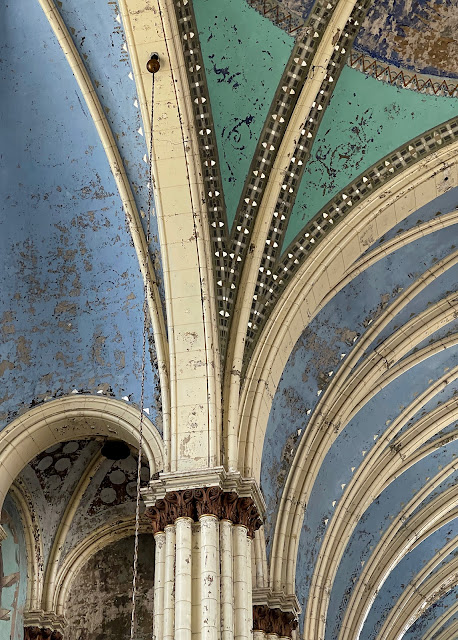 Later in 2005, Smithfield Properties unveils a plan that would involve building a high-rise on the school site.  Representatives of the Coptic Church reveal interest in the property.  They are allowed to tour St. Boniface, but two years later in 2007, after being unsuccessful in communicating with the Archdiocese, a letter is sent to Cardinal George asking for action on the Coptic Orthodox Church's proposal.  It is responded to with a pre-printed form. 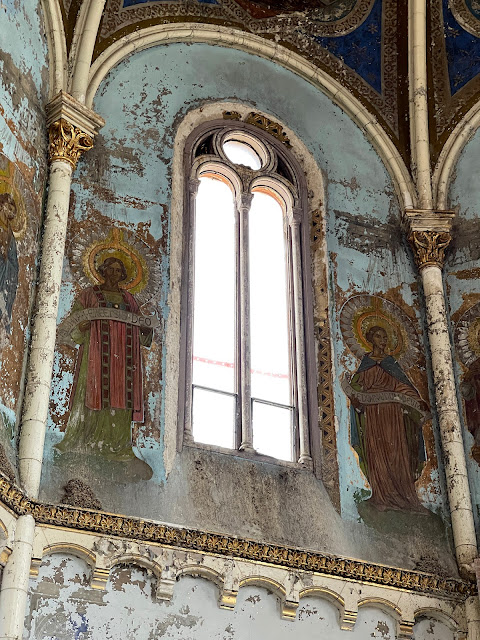 A year later, in December of 2008, the Archdiocese rejects the Coptic Orthodox Church's proposal,  and applies for a permit to demolish the church.  As St. Boniface is listed "Orange" in the city's Historic Resources Survey of potential landmark buildings, a 90-day hold is put on the demolition request. At the end of that period, a demolition permit is issued, but the city continues to negotiate. 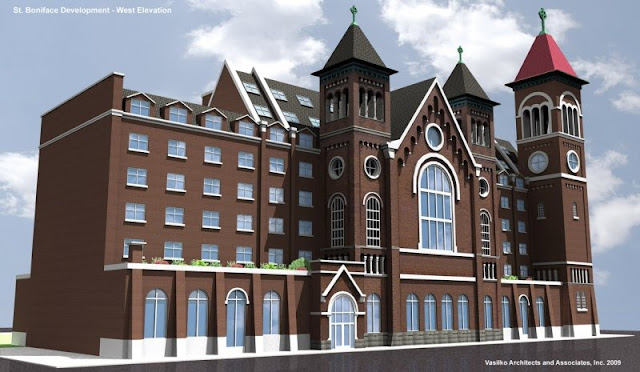 In 2010, a deal is reached where Institutional Project Management will build senior housing within the facades of the church. Storage of elements of the demolished school's facade are now warehoused by IPM, but will not be used

Four years later, in 2014, after developers are unable to obtain tax credits from the state and city, the senior living proposal is declared dead.  The following year, Carefree Development announces a plan to build 56 one and two bedroom rentals within St. Boniface's facades.  Another request for a demolition permit is made, and put on automatic 90-day hold, which is extended by the city. 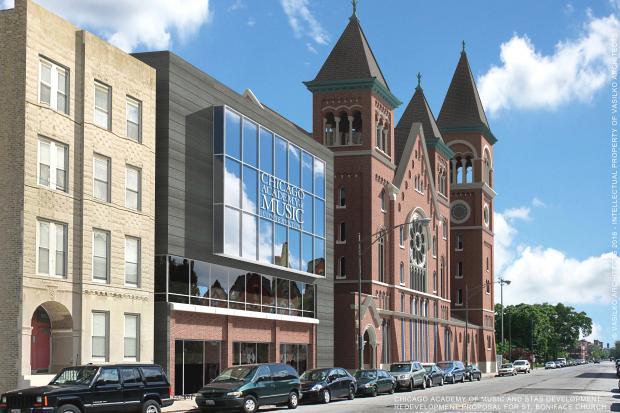 In 2016, the developer announces a 10 story tower to be built on the site of St. Boniface.  In April, the hold on the demolition permit is continued as the Chicago Academy of Music presents a plan to use St. Boniface as a music school and performance center.  In October, the Academy enters a deal with Stas Development to purchase St. Boniface. It includes landmarking the church and converting it to 15 condominiums.  The proposal is approved by The Chicago Plan Commission in April of 2018. 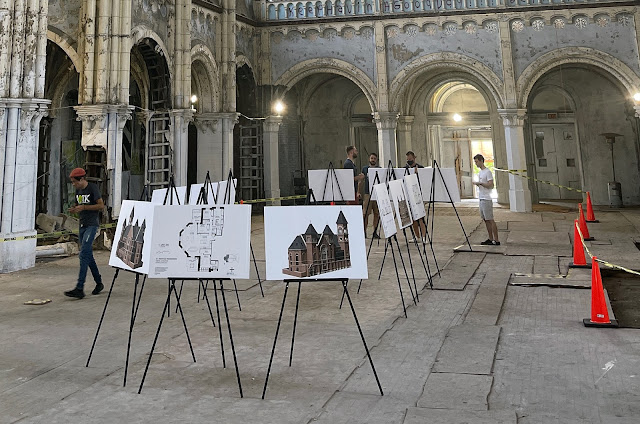 Last April, it was announced that Zev Salomon's ZSD Development had bought St. Boniface.  On June 12th, they opened the church to let neighborhood residents in to get a last look at the interior, cleaned up of the debris and much of the graffiti that had accumulated down through the decades. (There was also free ice cream, very welcome on a very hot day.)  Representatives were on hand and renderings and floorplans on display for potential buyers of the condos of The Boniface, which will range from $750k to $1.5 million.  The open tops of the bell towers will become private terraces for the pricier units. Reps said 3 units had already been sold. 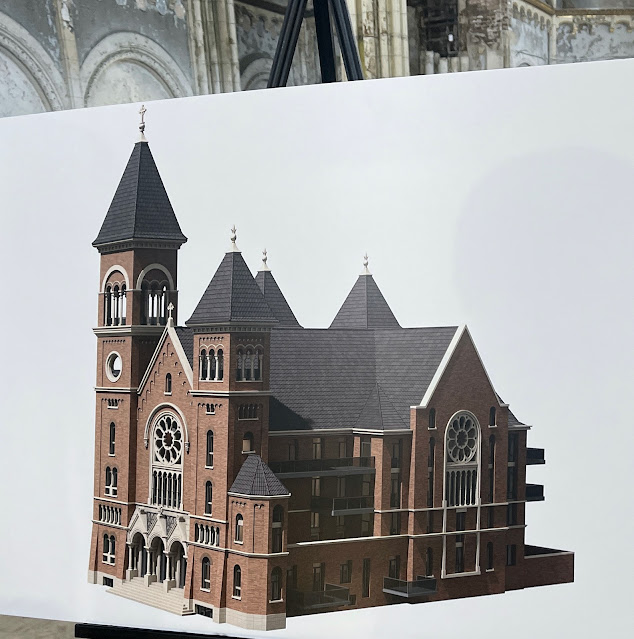 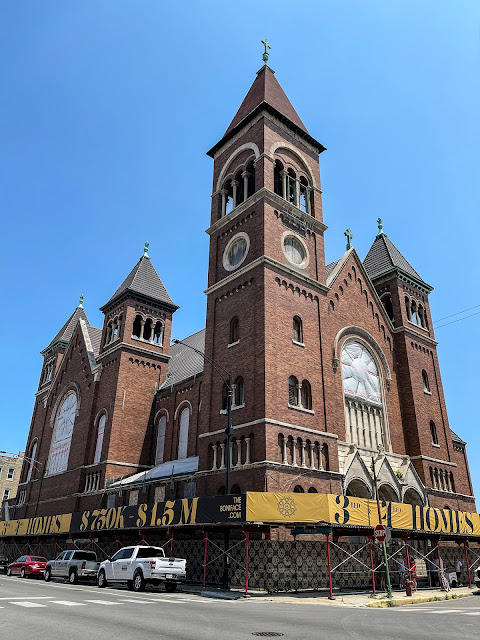 It's no small miracle that St. Boniface survived these three, troubled and contentious decades to finally be saved, if not as a community and spiritual resource, then at least as an outstanding architectural marker of its time and place.

As church attendance and the number of priests continue to decline, consolidations, abandonment and demolitions continue. In January, the Archdiocese announced a new round of closures, including St. Alselm, St. Ambrose and the spectacular Corpus Christi (shown above), whose last mass will be later this month.  Whether Chicago will ever find a viable solution or continue to allow our architectural heritage of historic churches to simply vanish remains an unanswered question, but that's a story for another time.

For now, here's some links, and more last images of St. Boniface's interior before it disappears.

Behind the Scenes of St. Boniface Church Photoshoot,  Matt Wilhelm 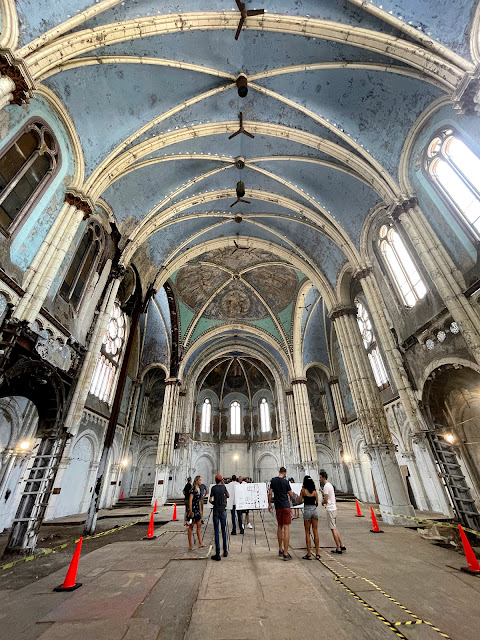 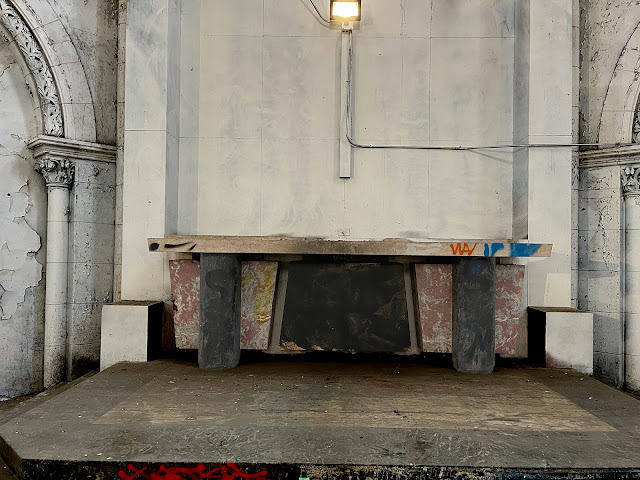 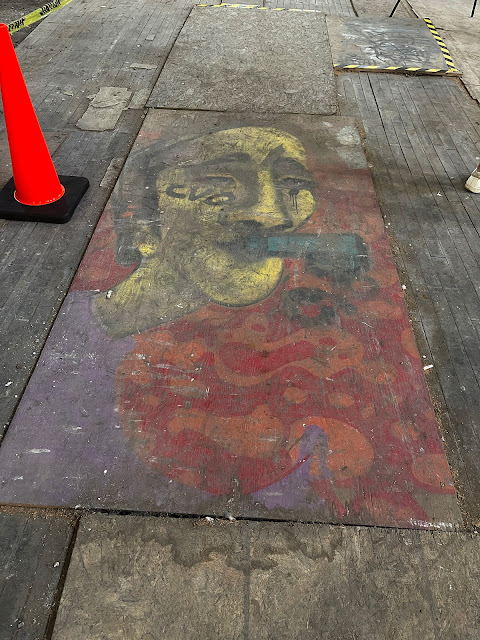 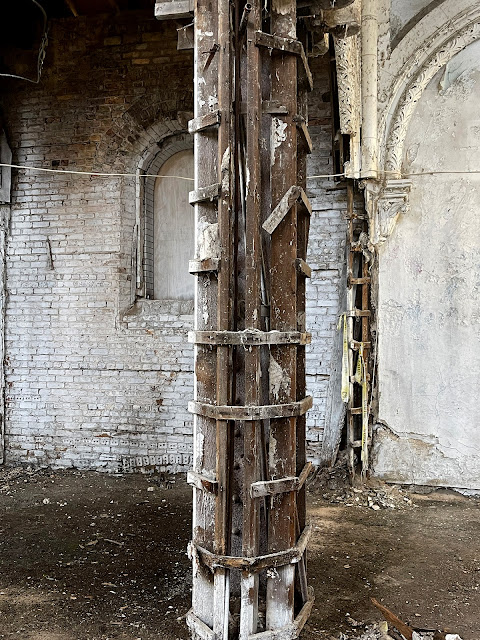 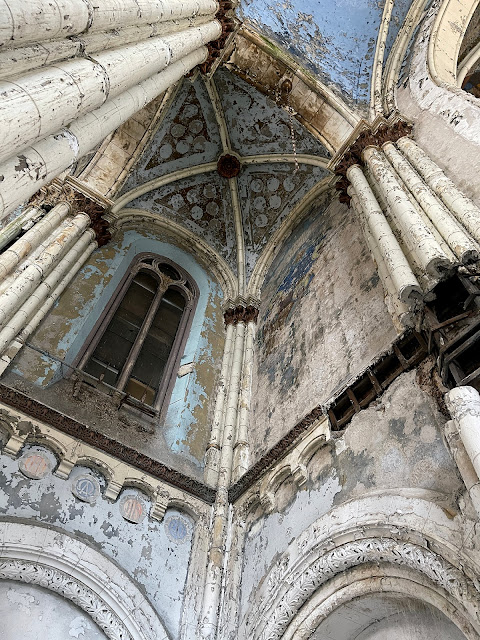 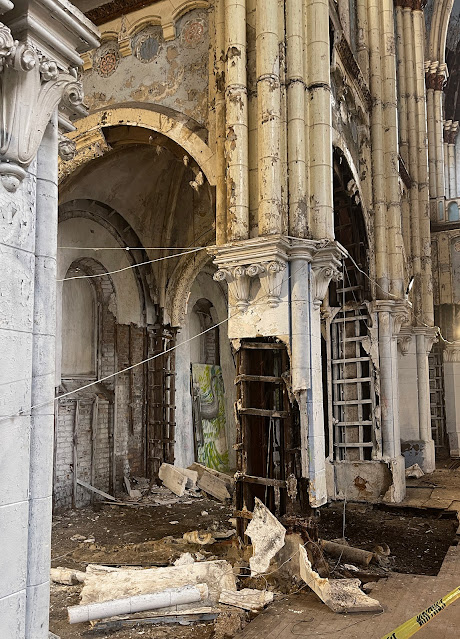 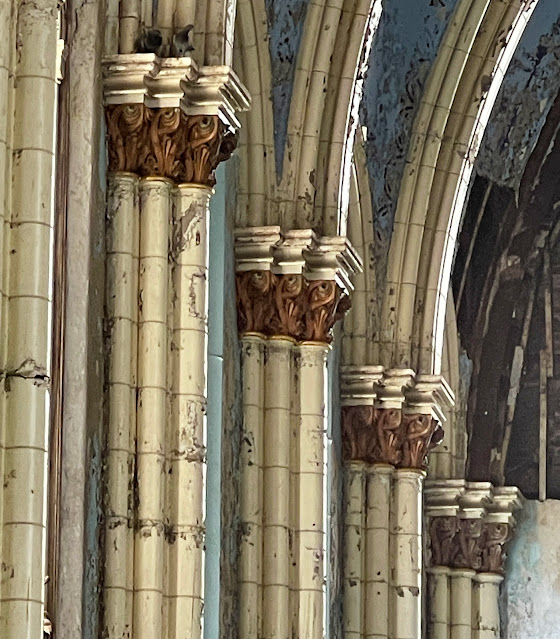 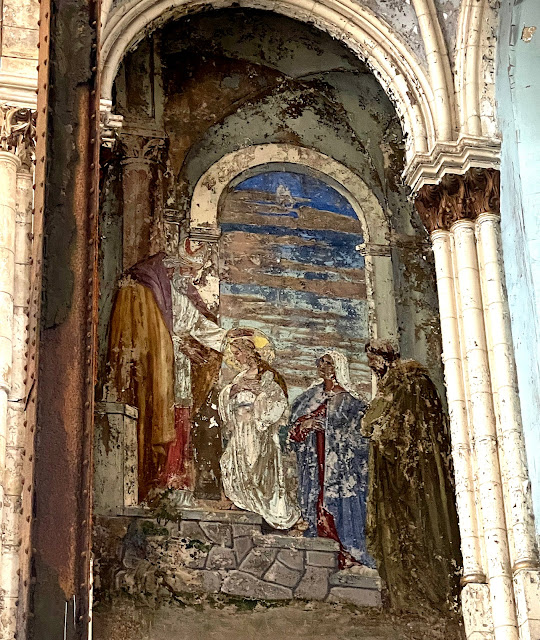 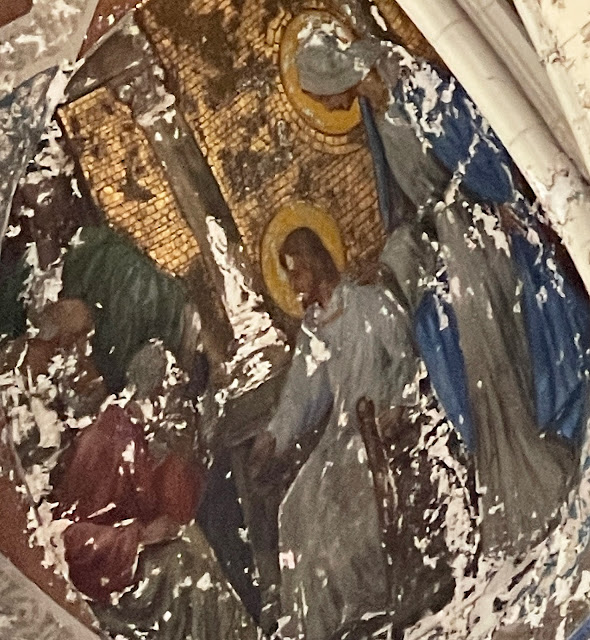 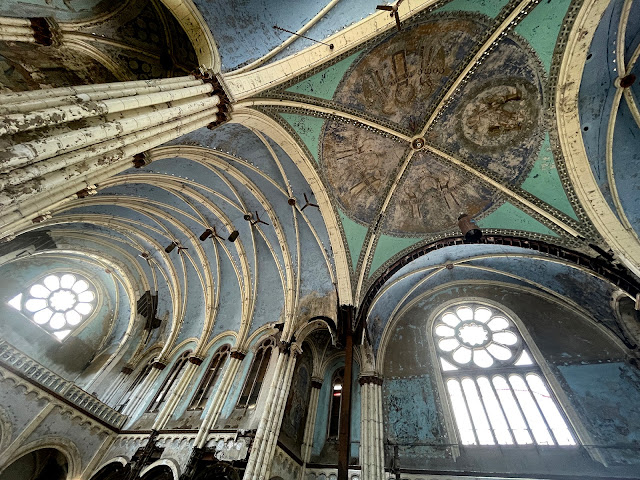 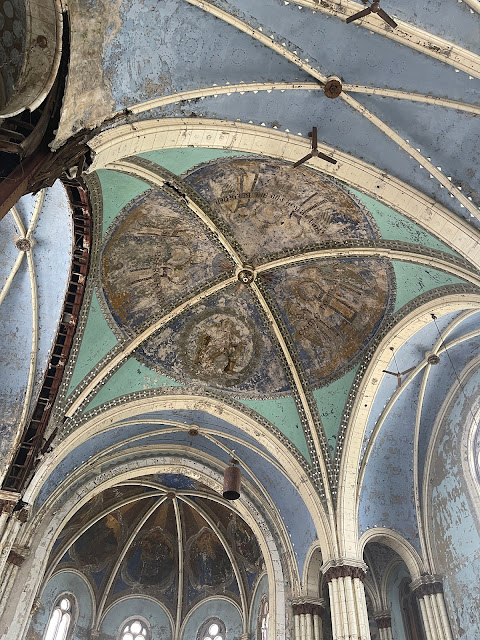 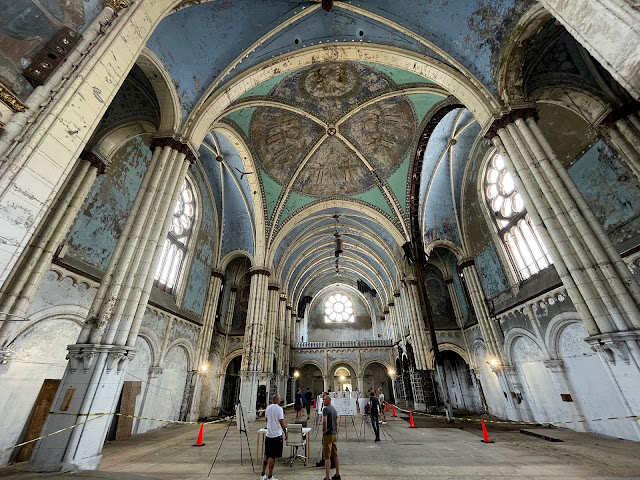