Children's Fountain Back - in Black? 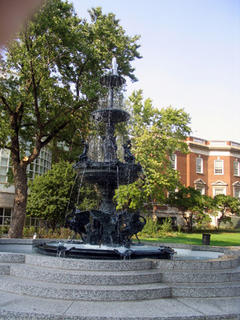 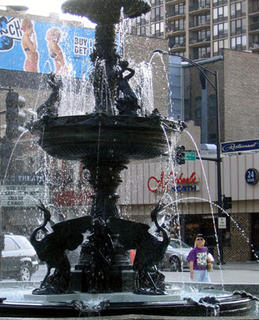 The Children's Fountain, a project of former Chicago mayor Jane Byrne, has been restored and reconstructed in front of the Chicago Historical Society, at the northeast corner of Clark and North. Dedicated in 1982, it had stood in a traffic island at Wacker and Wabash until it was dismantled, along with the same mayor's Vietnam Veterans Memorial (reportedly the first to honor that conflict's servicemen) for the 2001 rebuilding of Wacker Drive. According to the Building Blocks, Inc. website, the fountain was crated up by the reconstruction's contractor and stored under the Roosevelt Road Bridge, where it stayed for four years.

The restored fountain sits on a graceful new granite base, just across the street from the Latin School and Moody Church. The one glaring defect in the restoration is that the current finish, described on Building Blocks as "Antique Green 'Verde Grie' appears much darker than the original, which was a much lighter green both in memory and in photographs here, here, and here. Now, it's so dark that, even on a sunny day, it seems to suck in all the light, making it extremely difficult to see the ornate detailing, and giving what was a very playful fountain a heavy, funereal air.

ah! yes! thank you. this was always my favorite chicago fountain and i was wondering where it was moved to after the wacker drive reconstruction.