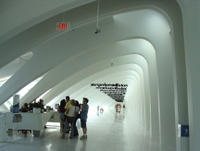 I finally got up to Milwaukee to see Santiago Calatrava's spectacular Milwaukee Art Museum. More of that later. However, a quick heads up on two exceptional exhibitions, both in their last days, that are definitely your while. The Arts and Crafts Movement in Europe and America, 1880-1920: Design for the Modern World runs only through September 5th. It's a country-by-country assembling of objects that include a George Maher fireplace and an entire dining room, from wallcoverings and carpet down to furniture, linens, cutlery and glassware, designed by Peter Behrens for the Wertheim Department store. Beginning October 16th, the show will move to The Cleveland Museum of Art, where it'll run until January 8th of next year. You have only a bit more time to catch another extraordinary show at MAM, Cut/Film as Found Object, in which 14 artists take existing films and transform them into their own artworks. I'll be writing later on the architectural aspects of Pierre Huyghe's "L'Ellipse" which depicts what takes place between two cuts in Wim Wenders 1977 movie, The American Friend, using the same actor, Bruno Ganz, twenty years later. The show will be up through September 11th.