The Red Line Lake Street Station: It's Great - Let's Trash it Up! 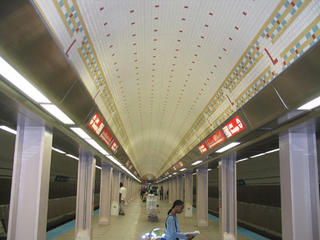 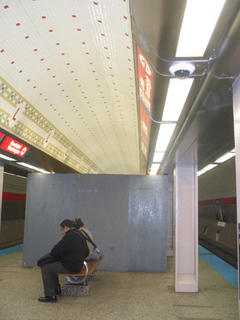 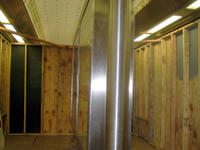 The bright and hugely attractive SOM rehab of the Lake Street subway station on the Red Line has only been open a short time, but that was apparently too long for the CTA, which has erected, smack dab in the middle of the platform, an incredibly shabby and outsightly wood shack whose sole purpose seems to be to shelter a huge new metal display case as if it were the Ara Pacis. Since a large part of the beauty of the station is in the interrupted sweep of its tile-covered vaulting, we can only hope that whatever work is still to be done won't linger forever and the ugly gray box will soon be dismantled and carted away.

We riders are also playing our part in trashing the station. Discarded chewing gum is accumulating in dark, flattened gobs over the surface of the beautiful, pink granite flooring. Where's Lee Kuan Yew when you need him?

Surprisingly, the new Jackson and Chicago stations are pretty clean, with few broken lightbulbs or the like. Sure, it won't always look brand new and we should pay DC fares if we want DC's shiny stations, but maintenance seems to be doing a fair job these days. The new, much brighter lighting makes the dirt that much easier to see, too.

I kind of wish that the stations north and south of the river could have more obviously distinct personalities. Keeping all of the Loop continuous platform tube stations looking similar makes sense -- after all, they could always move to a different stretch of the platform -- but many modern transit systems do much more to architecturally differentiate their stations.