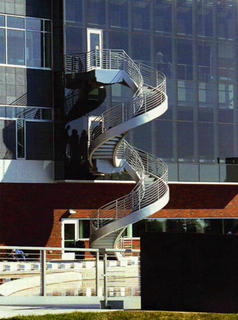 Since I'm unlikely to get up to Duluth in the near future - and neither, in all probability, will you - I thought I'd go ahead and post some images from Ross Barney + Jankowski of their latest project, the Swenson Science Building at the University of Minnesota at Duluth. The 100,000 square foot, $33,000,000 edifice was dedicated on September 16th, replacing previous chemistry and biology labs built in 1949 and 1968, respectively, and will house over 1,000 students a semester. More about the building, including photos and plans and the story of three teenagers who vandalized the project and caused $8,200,000 in damage, here.
(Click on time for permalink) 9:37 PM