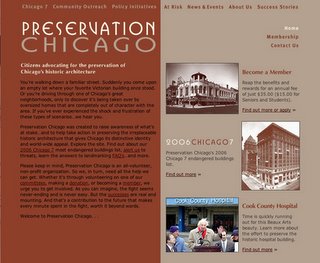 After a long gestation, Preservation Chicago, the city's grassroots preservation organization, has unveiled its new web site, just in time to cover the group's November 9th announcement of its 2006 list of The Chicago Seven, Chicago's Seven Most Endangered Buildings. The new list includes DePaul's Hayes-Healy Center, scheduled to be demolished for the CTA's rehab of the Fullerton Brown/Red Line Station, and the William LeBaron Jenney's New York Life Building on LaSalle, which stands to be substantially gutted for a new 50 story tower.

The new site offers a handsome design and a wealth of information. It provides a very thorough picture of the perils and posibilities of preserving Chicago's historic buildings. The only drawback I could find is the use of PDF's, rather than HTML, for descriptions of each entry on the Chicago Seven List. It's especially frank in talking both about the buildings they've failed to save as well as their many successes. There's always a concern about whether a site will be kept fresh and updated, but right now the Preservation Chicago website has become an indispensible addition to Chicago's architectural presence on the web.