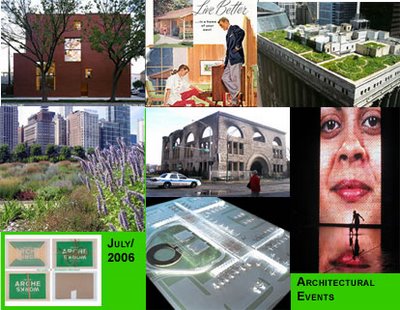 July is a lot more than just Taste of Chicago. There's still a lot to do, as far as architectural events in Chicago. While a number of institutions - CAF, the Architecture and Design Society of the Art Institute, the University of Illinois at Chicago - are deep into summer hibernation, the schedule still includes Archeworks' open house, a Grant Part Advisory Council symposium on the proposed Renzo Piano bridge linking the Art Institute to Millennium Park, Friends of Downtown's session on new visions for Navy Pier, Timothy Gilfoyle talking about his new book on Millennium Park at the Newberry Library,and the Landmarks Preservation Council lunchtime lecture on Post-war suburban housing. The Chicago Center for Green Technology, and AIA, which is offering member tours of a number of architectural studios, including those of Zoka Zola, and a afternoon session with Wiss Janny Elstner on the stabilization of the walls of the fire-ravaged Pilgrim Baptist Church, are still going great guns. Fried dough is all well and good, but don't pass up the more intellectually satisfying offerings. Check it all out here.
(Click on time for permalink) 12:01 AM