George Danforth, Present at the Creation, Has Died

Danforth was born in 1916, in Kansas, son of a pharmacist father, and musician 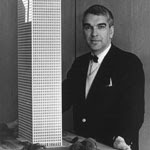 mother. He began his architectural education at IIT in 1935, when it was still the Armour Institute. In 1938, the school was looking for a new head for its school of architecture, and as each new possibility floated to surface, the students would head to the library to check out the prospect's work. There was particular interest when Bauhaus architect Mies van der Rohe joined the race.

Danforth, an accomplished jazz pianist, had been touring Europe when, according to a biography on the IIT website, he "received a telegram from the Department of Architecture librarian that read, 'Mies is here, and Benny is held over.' "Benny Goodman was one of my idols in those days, and he was playing at the Chicago Theatre, so I got to hear him when I got back." Shortly thereafter, he met Mies when he was introduced to Chicago architects at an AIA cocktail party.

Not only did Danforth study with Mies, but in 1939, when Mies had set up a small office on the 5th floor of the Railway Exchange Building - where its architect, Daniel Burnham, had once had his own offices on the top floor -Danforth became his first employee in America. It was Danforth who delineated the perspectives of the first proposals for the buildings of the new IIT campus, and the co-creator of the distinctive collages that would depict other proposals such as the Museum for a Small City, and the Rezor house in Wyoming. He would sit with Mies and go through books and magazines to find the reproductions that would be incorporated into the collages from the works of artists like Klee, Braque, Kadinsky and Picasso, whose huge masterpiece, Guernica, which had a tendency of overwhelming every gallery in which it was placed, was depicted in the collage of Mies's museum as a free-standing wall.

Danforth left the Mies office in 1943 to enter the service during World War II, but his association didn't end there. After the war, he was asked by Mies to join the IIT faculty where, after a stint as the head of the architecture program at Western Case Reserve, he returned in 1959 to take over IIT's School of Architecture after Mies retired/was forced out. He stayed through 1975, recruiting such illustrious educators as David Sharpe and Myron Goldsmith. Danforth opened his own practice, Brenner, Danforth, Rockwell in 1961, where the projects included the 1970's Great Ape House for Lincoln Park. "It was a marvelous training period for the office," Danforth says in the IIT bio, "because we’d never dealt with an ape as a client before."

For many years, Danforth made his home in Mies' classic 860-880 North Lake Shore 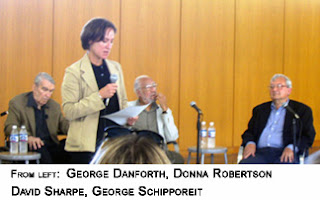 Drive Apartments. In the summer of 2005, frail but alert, he appeared at a symposium marking the reopening of Mies van der Rohe's restored Crown Hall at IIT. He talked of the evening that Duke Ellington played in Crown Hall for the school's annual dance. "Jacques Brownson [who would go on to design the Daley Center] put up a bandstand . . . that was really a jumping evening. . . . we haven’t had anything like that since."

Early on, Danforth had an accepted an invitation from Mies to view some ceramics in the elder architect's suite at the Blackstone Hotel, and was surprised to be shown a rich collection, not of clays, but of Klee's. He recalled how Mies and the other German emigres were often ahead of their students in their appreciation of American culture. "I was working in his office," remembered Danforth, "and I said, 'Mies, I can't be with you tomorrow because I've got a concert at Ravinia', and Mies said, 'What is it?' And I said, 'It's Benny Goodman,' and he said, 'Ah . . . Sving?'”

I was George Danforth's student at Western Reserve University. He was a great teacher, wonderful friend to all of us students and an unforgettable person in my life.