The Houses That John Wellborn Root Built (and Died In)

An unlikely source, the Decatur Herald-Review, carries an excellent story this Sunday by Phil 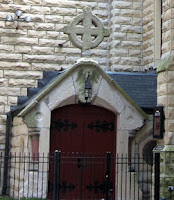 Jacobs on the Queen Anne detailed house at 1308 North Astor (leftmost in the bottom photograph) designed by John Wellborn Root in 1887 for James L. Houghteling (1855-1910), who in 1883 founded the Brotherhood of St. Andrew at St. James Cathedral, and whose family funded the Cathedral's 1913 St. Andrew's Chapel, designed by Bertram Goodhue, the architect of Rockefeller Chapel at the University of Chicago.

It was also the home where Houghteling's uncle-in-law, the U.S. Senator from Michigan, Francis Stockbridge, died during a 1894 visit. Just three years before, in the house next door (photograph 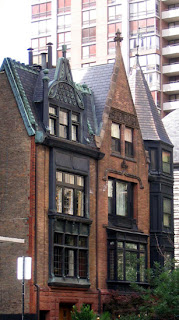 center), Root himself had died, after throwing a reception for the eastern architects who had been chosen to help design the 1893 Columbian Exposition. On a brutal January night, he had insisted on seeing each one to their carriage, and contracted the pneumonia that would kill him several days later.

Originally, there were four houses in the set; the fourth and southernmost demolished long ago. (Since 1962, it's been part of the site of Bertrand Goldberg's Astor Tower) The Houghteling house's current owner, artist, sculptor and musician Andrew Lidgus, is selling the house and buying an art gallery. According to one report the property was last sold in October of 2006 for $1,950,000, but it can now be yours for $4.5 million. For those of you with that kind of spare pocket change, you can take a virtual tour here.

There are a lot of errors in that article.

Being listed on the National Register does not offer any protection from alteration or demolition.

The Charnley House is not a private residence.

Anybody else see any others?

Picky, picky, picky, but of course you're right. The story reads like a real estate section product placement, but there was enough interesting stuff about the Houghteling Houses that I didn't pay much attention to the filler, and thought the article was worth passing on.

Looks like theres not much left of its former beauty.