Last Friday night, the Graham Resource Center, commonly known as "The Library" of the School of Architecture of the Illinois Institute of Technology, celebrated a major expansion of both its space 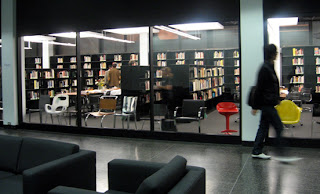 and its collection. The library, located on the lower level of the Mies van der Rohe's iconic Crown Hall, has doubled its space, to 6,000 square feet.

"About two years ago," said Dean of Architecture Donna Robertson, "Professor Harry Mallgrave, who was new to my faculty, said to me, 'You know, this library is not up to snuff.' I said, 'I know, I know. I'm trying to grow it, with no money.' He said, 'I'm going to write a letter to the alumni and ask them to donate. He did, and it worked." 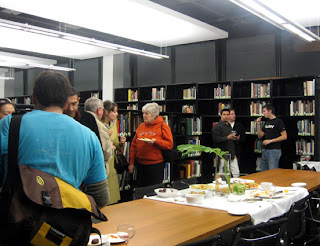 "I would say around 20 to 25 alumni responded," says Head Librarian Matt Cook. "That seems low, but they gave us 13,000 books. Some of those donors gave us huge collections. We've got George Danforth, Myron Goldsmith, Paul Thomas. Deever Rockwell donated some Alfred Caldwell works, which we currently have on display."

"Since I started here four years ago, we've gone from 5,000 to 15,000 books. We've hired a second librarian to get the new donations processed. It's only going to be a couple of years until this library is filled. It's capacity is 35,000 and we'll be there relatively soon. We have about 35,000 slides. We're working diligently at digitizing those."

"Champaign-Urbana, I think is the best architectural library in the Midwest. I think 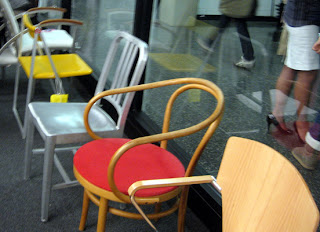 we're awfully close to being the best architectural library in the city."

Robertson also announced the school is starting an endowment fund to support the Graham Resource Center.

The evening concluded with a lecture by Kenneth Frampton, Ware Professor of Architecture, Columbia University, who gave a preview of a book to be published by Rizzoli, documenting Frampton's course on the Comparative Critical Analysis of Built Form. ("The publishers," said Frampton, "being publishers, don't exactly think [that's] a swinging title.")

"The dinosaur is still in the habit of showing the slides," Frampton confided, but the lecture was accompanied by what "I also have to say in perfect embarrassment, is 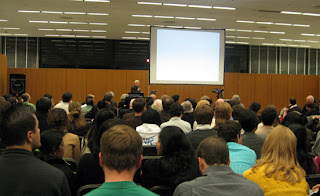 the first Powerpoint presentation of my life." The slides appeared to be page mockups for the future book, which left, to Frampton's chagrin, many of graphics small and sometimes difficult to decipher. There may be something to said for the old-fashioned kind of slides, after all.

Frampton developed the comparative analysis exercise in the 1960's from the observation that, "Analyzing one building was a sort of tautological exercise . . . if one analyzes two buildings that had a number of things in common, one could come to a kind of revelation, if you like, a consciousness of the sameness and difference between of the two buildings . . . in order to exemplify the potential of built form" and bring the intrinsic character of the examples into sharper relief. "That's why I begin the course with two buildings that both have polemical manifesto's attached to them. One has the Five Points of New Architecture, which is Maison Cook of Le Corbusier, and the other has the Sixteen Points of a Plastic Architecture," G. Rietveld's Schröder-Schräder House.

Thier book donation campaign over the last few years seemed to have worked well. I know I had a lot of books collecting dust and figured that the kids there might be able to use them.

this was probably the worst lecture i have ever seen by frampton. i'm surprised he was as lucid as he was, considering they were serving alcohol before the lecture.