Last November, we were covering the destruction of the 1888 George Harvey House, the last of no less than three rare, irreplaceable Adler & Sullivan designed structures to be destroyed by fire in a single year.

2007 comes to close on a more positive note. This time it's not destruction, but construction that's going on at another three of Louis Sullivan's designs. 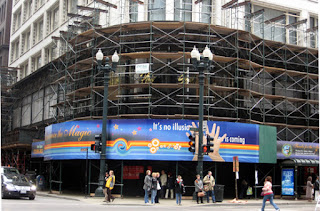 beautifully reconstructed under the direction of preservation architect Gunny Harboe, just in time for the century-old department store to announce it would be closing its doors early in 2007. The new owner, Joseph Freed & Associates, is in the process of converting most of the structure to office space, and is still seeking tenants for retail on the lower floors.

Now the Chicago City Council has given final approval to a $9.48 million TIF subsidy 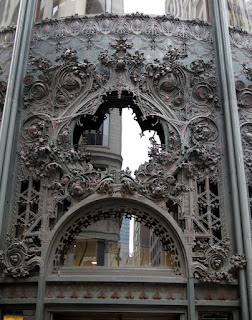 towards the estimated $11.82 million cost of repairing and restoring Sullivan's intricate, almost obsessively fecund foliate cast-iron ornament that frames the shop windows of the first two floors of the building. "Experience the Magic" proclaims the signage covering the scaffolding, echoing the "Something Magic is Happening" slogan on the shade put over Macy's windows when they're being changed, a Disneyfied invocation of the occult that manages to be creepy and insipid at the same time. In the case of Macy's, the unveiled "magic", except during the Christmas holiday, is usually just another pedestrian window setting. At Carson's, at least, the finished product has a much better shot at actually fulfilling the promise.

One block down State Street, opposite the Palmer House, a far more mundane - and largely unnoticed - Sullivan design, the 1884 Morgenthau, Bauland and Company store, trashed long ago in a clunky "modernization", is also covered in scaffolding for a new Ulta cosmetics store. 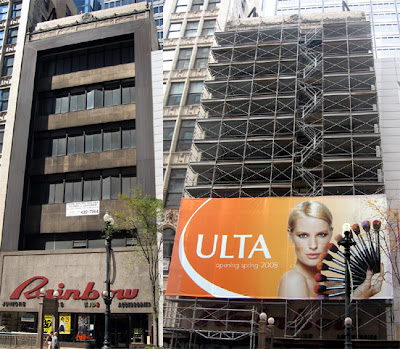 If you look up to the building's crown, you can see the last remnants of Sullivan's ornament.

Things are also looking up at the 1881 Jeweler's Building on Wabash, designed by Sullivan before he became Sullivan, in a sort of 1870's commercial Gothic style that still manages to carry intimations of a master's touch. For as long as I can remember, the building's been trashed by the second floor windows being covered up with green-painted wood inserts. 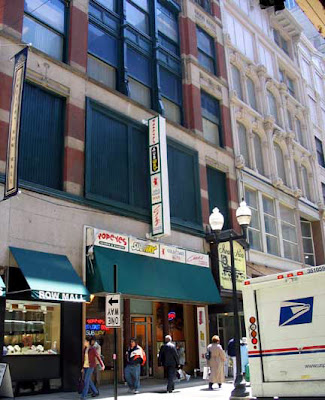 Now, the wood is gone, the windows again revealed. The building is losing its haphazard derelict patina, and the rough beauty of the young Sullivan's conception allowed to again come through. 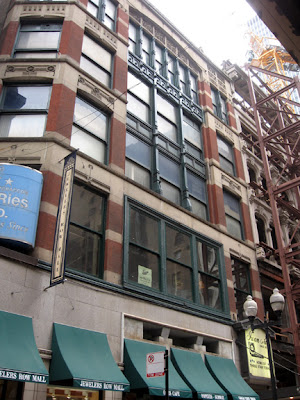 Lynn,
What do you think of the 1960's glass and steel bank building at 100 W. North Ave. getting preliminary landmark designation? Does this belong in the same league as a Sullivan building, or have they completely lost their minds?

Like, I love Sullivan more than life, but most of his stuff is not nearly as good as that bank. They have already started trashing that bank in a new renovation...Diamond Bank...wtf

The Diamond Bank is part of a group of neighborhood bank buildings being proposed for landmark designation. If every building had to be on the level of Louis Sullivan, we wouldn't have many landmarks (especially considering how we allow Sullivan's stuff to be burned down or destroyed pretty much with impunity.)

The new Diamond Bank canopy is much larger than the original, but it's still not as bad as I feared as I watched it being constructed. The building itself is a very elegant example of modernist design, and I have to say that I would welcome it getting protection.

If the Diamond Bank building is landmark worthy then all of Skokie, Morton Grove, and Niles should be declared one big protected landmark historic district.

How about that Golf Mill shopping center? Now there's a gem. Not quite on the level of Sullivan maybe, but hey, if that's the standard, then we wouldn't have many landmark buildings.

Actually, there's another Sullivan design being restored soon too. It's an 1896 storefront and facade he did for Schlesinger and Mayer before his more famous design for State and Madison. Only a portion of it remains visible on the 2nd floor, but the 1st floor will be fully restored.

I don't know the history of the Rainbow store, but is there any possibility that Ulta can or will bring back the Sullivan design?

I have helped as a volunteer with a number of historic preservation efforts. I also like modern architecture.

However, I agree with the above commenter about the bank at 100 W. North Avenue. That building does NOT merit landmark protection.

Landmarking structures like that can give us preservationists a bad name.

"...Anonymous said...
I don't know the history of the Rainbow store, but is there any possibility that Ulta can or will bring back the Sullivan design?..."

Along those lines, Lynn, do you have a photograph of what that building looked like originally? When the Central Loop TIF gets renewed, maybe we can tap into that fund to help get some of these facades reborn. And I am NOT being sarcastic!

"manages to be creepy and insipid at the same time"

Damn, you hit that nail on the head. I'm amazed that these companies put so much money into spreading messages that aren't worth saying to anyone at all. It seems to be they would garner more interest with a sign saying, "Building Holiday Display," or maybe better yet, keep us guessing and thinking by putting up no sign at all.

Take a look at the impact Wells Fargo is having on the Sullivan bank they own in Grinnell, Iowa. A winged lion was vandalized almost two years ago-- and WF has yet to act on it. The void is now immortalized in watercolor!

The lion should be sitting on its pedestal to the right of the doorway.

You would think a major financial institution would want to be a good steward...

I just heard about the damaged lion and I live an hour away... Looks like it's been over 2 years and probably too late, I probably could have restored the lion or at least sculpt a replacement. As a sculptor I specialize exclusively in recreating Victorian and Art Deco architectural ornaments. Sculpting a replacement would not be a big deal, finding a kiln to fire it that is large enough would take some work however, otherwise it would have to be made in smaller sections.

I should add that replacing one of these lions is not as simple as one may think, they are terra cotta. If a mold was made of the existing one, there is clay and firing shrinkage to contend with- the cast would be several inches shorter and smaller, about 10-12% which would look obvious.
Since the existing one is damaged too- the wing tip was crudly 'repaired' with glopped on concrete it looks like,and the base sports a missing chunk, it might be best to move it into the lobby for a historic display and install two replacements so they would match, otherwise any repairs or replacement of one will look obvious.

Sullivan design is still the landmark of that place. Maybe that bank has a good design but Sullivan building is still the most famous landmark designation.