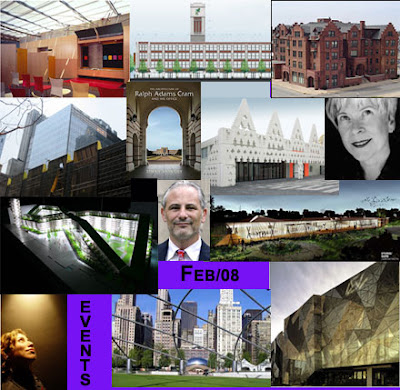 Bagli, Bates, Betsky, Dunn and Felsen, Eifler, Ingels, Jacob, Kipnis, Maddox, Mau, Ryan, Wilkinson, Woodhouse: have we said enough? They're all on the February calendar of Chicago architectural events which, with over 45 items, is densing up to the point of traffic jams such as Cincinnati Museum of Art Director Aaron Betsky and Sam Jacob of London's FAT {Fashion, Architecture and Taste] squaring off against each other, at different locales, 6:00 P.M. February 18th. Jacob's appearance is part of a crackjack list of lectures booked by the School of Architecture at UIC, which this month also includes Bjarke Ingels of Copenhagen's BIG, and Donald Bates of Melbourne's LAB Architecture Studio.

And then there are the double-dippers. UrbanLab's Felsen and Dunn not only appear at a CAF lunchtime lecture, but at an open house at Archeworks, to which they've just been named co-directors, succeeding Stanley Tigerman and Eva Maddox, who has her own lecture at Archeworks on the 6th. It's like Six Degrees of Stanley, except that with Tigerman the game pretty much ends for everyone by the time they get to the second degree.

Grant Uhlir talks about Block 37, the Grant Park Advocacy Council and Commission on Chicago Landmarks both consider the historic Michigan Avenue streetwall, and Friends of the Parks presents the Calumet Open Space Reserve, where Jeanne Gang's Ford Calumet Environmental Center looks at last to have passed its final hurdle to actually breaking crowd. And unless you want to wind up with a bunch of egrets, you'll check out the full roster of events - there's much, much more - on the February calendar here.