Love is in the Air - plus Pond, Fresh, SOS and Carla Bruni, and more : 40+ events on the February Architectural Calendar 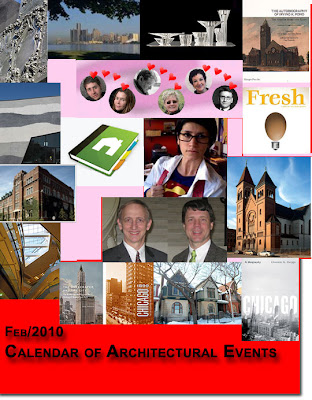 Making buildings is easy; relationships are hard. The Chicago Architecture Foundation leads off the February Calendar of Architectural Events in an amorous kind of mood with a Tuesday night panel, For Better or Worse: Architects In Love, including Stanley Tigerman and Margaret McCurry, Martin Felsen and Sarah Dunn, and Joe Valerio and Linda Searl. And speaking of relationships, Paul Fitzpatrick and Joey Carr from Joseph Freed will talk about the Good News About Block 37 for Friends of Downtown on Thursday.

IIT kicks off a great lecture series with Rick Valicenti on the 10th, and Franz Schulze and Edward Windhorst giving a preview of their revised and expanded book on Mies van der Rohe on 24th. Gunny Harboe talks about the restoration of Louis Sullivan's Carson Pirie Scott ornament at AIA Chicago on the 11th, and Edward Barber and Jay Osgerby talk about Work in Progress for the Architecture and Design Society at the Art Institute on the 8th.

Authors abound: those of both Chicago 1890: The Skyscraper and the Modern City, and The Skyscraper and the City: The Woolworth Building, are at a lunchtime lecture on the 10th at CAF, where the next evening on the 11th, Dominic Pacyga discusses his Chicago: A Biography. The Autobiography of Irving K. Pond is expounded on by its coauthors: Terry Tatum at the Cultural Center for Landmarks Illinois the 18th, and by David Swan at the Glessner House Museum on the 24th. Joseph Schwieterman and Alan Mammoser discuss their book, Beyond Burnham, at APA Chicago on the 23rd.

Plus Vince Michael talks about Community Activism and the the Rise of Historic Districts at another CAF lunchtime talk on the 17th, where the next Wednesday, the 24th, Preservation Chicago's Jonathan Fine will expand on his organization's - by then -just released 2010 edition of the Seven Most Endangered places. Also on the preservation front, Carla Bruni (no, not that Carla Bruni - it's the noted green historic preservation consultant) will talk about her field at the Chicago Center for Green Technology on the 16th.

Did you notice we didn't even get around to all the great items mentioned in the headline of this post? There are over 40 events waiting to be your valentine this February. Check them all out here.