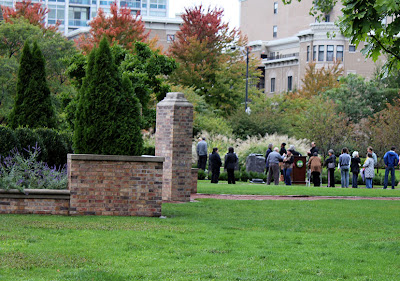 Bourgeois's leap of faith was not rewarded.  According to Chicago Park District historian Julia Bachrach, Bourgeois's sculpture "did not fare well in that location. It was exposed to the intense winds of Lake Michigan. It was in a heavily used area. It was in a low setting with poor sight lines. It not only deteriorated, but the art work was also the victim of severe vandalism." As reported by The Reader's Martha Bayne and Jeff Huebner, the sculpture was attacked at least twice - with the fingers on one of the hands chopped off as if they belonged to someone who had failed to pay back a juice loan.  The Art Institute, which bankrolled the sculpture, and the Park District, which placed it, threw in the towel and removed the piece to a Park District warehouse. 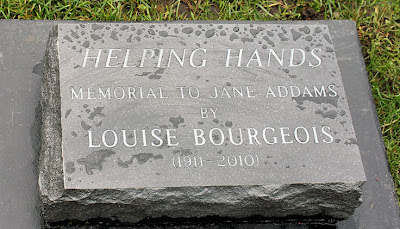 "Fortunately," continued Bachrach at rededication of the artwork this past Saturday, "this sculpture was the gift of the Ferguson fund of the Art Institute. As Chicagoans we are so lucky that lumber merchant Benjamin Franklin Ferguson decided to establish a $1 million endowment for the installation and perpetual care of public art in our city more than a century ago." Ferguson's largess, valued in the tens of millions in today's dollars, funded 20 individual works, from Lorado Taft's Fountain of Time, to the Henry Hering monumental reliefs on the Michigan Avenue bridge, Henry Moore's Nuclear Energy at the U of C, and Isamu Noguchi fountain along Columbus Drive, which has fallen into a state of neglect where even its owner, the Art Institute, appears to have forgotten it's there.  (You can find photographs and full descriptions of all the Ferguson Fund commissions on Jyoti Srivastava excellent Public Art in Chicago website, here.)

"In 2006," says Bachrach," the Ferguson fund covered the cost of moving the artwork, sending the damaged pieces back to Louise Bourgeois so that they could be recreated by the artist, who was then in her 90's. The other pieces went into storage. For several years, "the project was tied up in good old political bureaucracy" 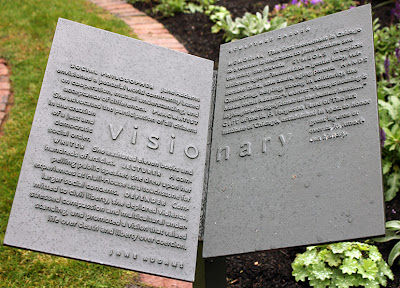 Bachrach credits Park District President Bryan Traubert for suggesting, "why don't we find an alternative location with Chicago parks so that we can return the artwork to its rightful place in the public sphere?" "The timing was excellent, " remarked Bachrach, "because the City of Chicago had recently transferred ownership of the Chicago Women's Park and Gardens to the Park District. Mimi McKay is the landscape architect who originally designed Chicago Women's Park for the city and she very graciously helped us identify the location for the installation and advised us on some of the landscape issues." 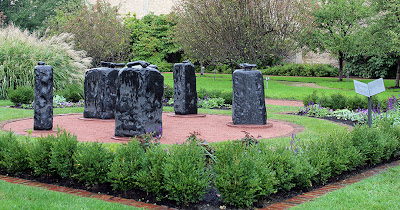 So the sculpture is back, relocated to just the north of the Clarke House Museum, at 1827 South Indiana, fronting on the Prairie Avenue historic district.  Chicago's oldest house, it's celebrating its 175th anniversary this week with an all-day symposium this Wednesday, September 28th, and a Family Day, Saturday October 1st offering free mini-tours, folk music, period fashion and other events.  (More information here.). 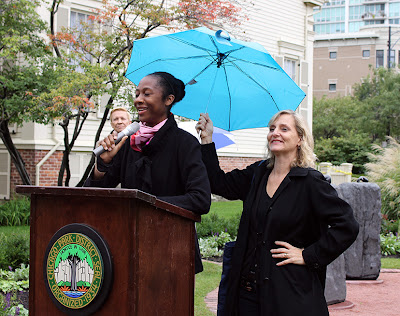 Naomi Beckwith, Julia Bachrach
Saturday's event also offered remarks from Glessner House's William Tyre, 2nd ward alderman Robert Fioretti, and Museum of Contemporary Art curator Naomi Beckwith, who compared Bourgeois's more human take on surrealism than that of the flamboyant Salvador Dali.  "She didn't choose," said Beckwith, "to make a monument that was a large scale sculpture. It wasn't a sort of a real figuration of Jane Addams, a picture of her, as you would normally see. But it was about these hands that Jane so beautifully spoke about, as a symbol.  And all these hands as you can see are reaching out and touching, and they're so delicate, and so warm, and so for Bourgeois this idea of surrealism was about the inner life of what you could love and what you feel inside." 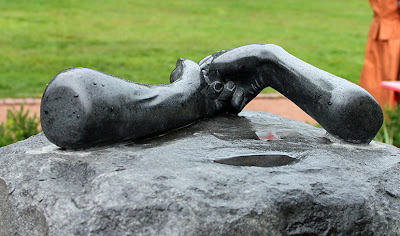 As someone whose early childhood was marked by nightmares of disembodied hands emerging from the baseboard to grab and hold me, I'm probably not the best person to critique Bourgeois's sculpture.  Far more interesting to hear from Jane Addams . . . 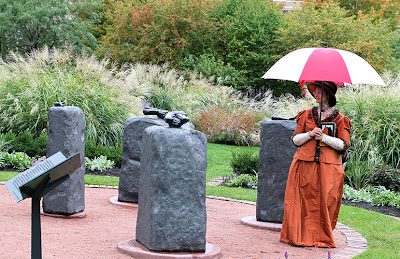 . . . whose person and spirit were ably recreated on Saturday by artist and activist Jan Lisa Huttner, portraying Addams, and reading an excerpt from her memoir, Twenty Years at Hull House, in which she recalled a visit to a London slum where she witnessed the desperately hungry poor thrust out their hands to grab their winnings in a regular Sunday auction of rotting fruit and vegetables.


Perhaps nothing is so fraught with significance as the human hand, this oldest tool with which man has dug his way from savagery and with which he is constantly groping forward.

I have never since been able to see a number of hands help upward, even when they are moving rhythmical in a calisthenic exercise, or when they belong to a class of chubby children who wave them in eager response to a teacher's query, without a certain revival of this memory, a clutching at the heart reminiscent of the despair and resentment which seized me then.

If you want to see more, here's an execrably shot video of excerpts from Saturday's ceremonies, complete with  vertigo-inducing camera movement and thumbs and fingers over the lens.  It might be better if you just listen. (I really have to take the time to teach myself how to shoot extended videos on my Canon T2i.)  Suitably, for a monument whose history and substance carries ambiguities between hope and despair, the day oscillated between a persistent drear drizzle and short bursts of blue sky and  bright sunlight.

Glad to see it restored and place in an appropriate place. It's a cringe-inducingly awful piece of sculpture, though. It's the sculptural equivalent of that radio jingle for Jewel-Osco, I think, that went "Count on people-- people who caaa-aaare..."