Pathetic on a Stick: Lightscape on State

This is what a million dollars looks like today . . . 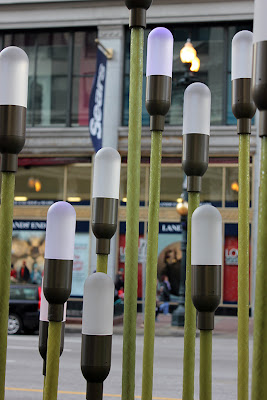 click images for larger view
The fad of the cactus lamp died out decades ago, but it lives on in Lightscape, a series of a dozen clusters of  9-foot-tall "prairie grass" lights that has just been unveiled down State Street that, according a report in Crain's Chicago Business, cost a cool $1 million.  It replaces the traditional holiday lighting on the street, for which Crain's quotes the Chicago Loop Alliance as saying cost about $120,000 a year.  Only 9 years to breakeven. 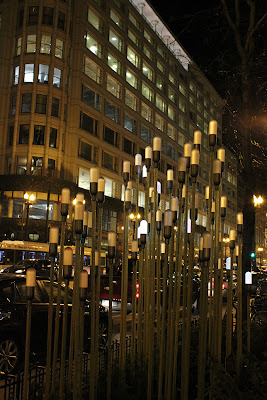 They were paid for by assessments on State Street retailers, in largest part by allocating the next five years of the former holiday light funds to Lightscape.  They're using new energy-efficient LED lamps from OSRAM Sylvania, cutting electrical costs, and sharply curtailing labor expense, 'cause they're never going to be taken down.  They're up year round,  "changing" with the seasons and for special events.  There's also supposed to be embedded speakers for "special announcements" and syncing the light show with musical selections, although during the two days I scoped out Lightscape, if there was any sound being produced it must have been in the range only dogs can hear.

The project reeks of the usual greenwashing (we're saving thousands of dollars in electricity, and it only cost a million!) and hype, from the self-congratulatory claim that now they won't have to just throw away all the lights each year (as if the whole point of the exercise wasn't to encourage shoppers to buy tons of stuff they'll hopefully mostly throw away by next year so they'll have to do it all over again), to descriptions of the anemic displays as "setting the Loop ablaze." 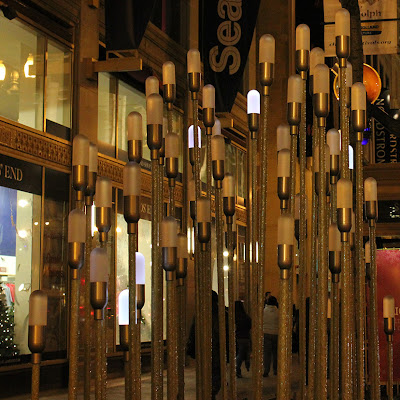 Well, the second coming of the Great Chicago Fire, Lightscape ain't.  Instead, it's just another flavorless homogenization of a once great shopping street.  The  faux-glitter of the poles look cheap, and a number of them already look to be listing away from plumb.  A lot of time watching the clusters at the end of last week consisted of waiting for them just to light up, then seeing one or two lamps slowly come to life, and then colors that appeared to have nothing to do with the traditional green and red of the holiday, but instead completely generic whites, yellows, oranges and purples.  And then back to a long waiting period of nothing being lit at all. 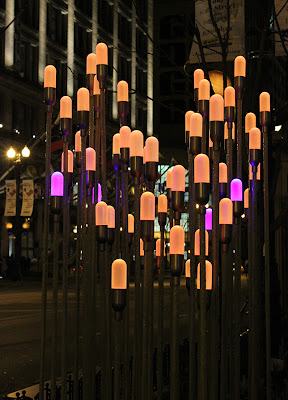 Some of this, I'd like to think, is just a matter of early performance jitters.   Soon, it's hoped, the music will start to play, and it won't sound like it's coming from a $2.00 boom box.  Soon, the co-ordination between the music and lights will start to take hold, creating patterns that are interesting rather than just erratic.  And the selection of colors will actually have some relationship to the holiday they're supposed to be celebrating.

Even if all this comes to pass, however, the bottom line is this: Lightscape is a lightweight - a supply-chain, one-size-fits-all solution for a shopping district that desperately needs a distinctive identity.  Again according to Crain's, funding for Lightscape not only has killed off traditional holiday decorations, but it's also resulting in pulling the plug on the work of real, distinctive artists who exhibited in the "pop-up" art galleries in empty State Street storefronts.  Loop Alliance director Ty Tabing told Crain's they're no longer necessary.  He may wind up being the only guy actually blinded by Lightscape's dim light. 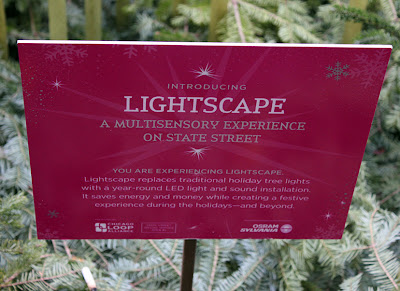 Follow-up:  Ty Tabbing of the Chicago Loop Alliance has written to tell me that "reeds" - the individual light poles - are actually designed to sway as a way of dealing with Chicago's high winds, and also that the Pop-up Gallery program, despite a reduction in venues due to decreased vacancies along State, is still very much alive.

I concur.
they are quite lame.

If they are listing on day one, It'll be interesting to see them after a couple nights of high winds. Also, they're ugly.

I saw these last night and thought, "this is retarded". But not as retarded as the GSA's plaza at Quincy Court with the metal Palm Trees. I wish I had access to money to piss away.

There actually is sound, although it's probably overwhelmed by traffic noise most of the time. Yesterday evening, I was at the bus stop at State & Jackson (around 10pm) and heard amplified Christmas carols, which I realized came from the flashing lights across the street. There's a sort of light show in time to the music, as well. At 10pm, State Street is not that noisy, but when a bus came, it drowned out the sound, which is probably going to happen most of the time.

I'll bet a dollar those stupid pole/light thingys will be gone by next summer. Once Chicago's winter erodes the innards and wiring of them, whatever organization put them up will quietly take them down.

Just like the Marilyn Monroe statue, completely lame and out of place. What idiot chooses these things to represent our city?

Just like the Marilyn Monroe statue, completely lame and out of place. What hired Chi government idiot chooses these to represent our city?