Great Sunday Reading: Kogan on Graceland, Borrelli on Complexity and Contradiction at The 606

The Trib's architecture critic Blair Kamin gets a run for his money with two great pieces by his colleagues in this Sunday's edition.  (You can see the stories in the print edition, or via free digital subscription on the Trib's website.)
Rick Kogan on Graceland
First up, Rick Kogan has a great story on Graceland Cemetery, and the restoration by Bill Bickford of Holabird and Roche's 1888 arts-and-craft chapel.  Kogan reports that the cemetery could well become the final resting place of legendary film critic Roger Ebert, which would extend Graceland's role as a sort of Pantheon for important Chicagoans.  Especially architects - Graceland's got everyone from Daniel Burnam to John Wellborn Root, Louis Sullivan, Bruff Goff, Marion Mahony Griffin and Mies van der Rohe  In 2007, a new memorial was dedicated to William Lebaron Jenney, a century after his ashes were scattered over the cemetery. 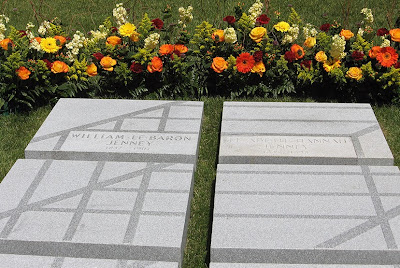 Read:  Graceland, and restored chapel, a wonder to behold.

Christopher Borrelli on The 606 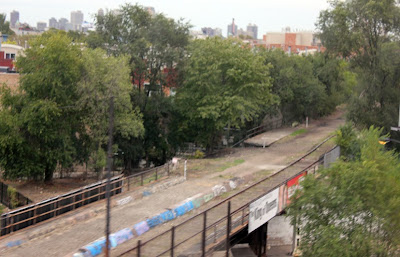 Even better, however, is Christopher Borrelli's consideration of The Bloomingdale Trail, now rechristened, as we wrote about Friday, The 606.  Borrelli faces head-on what is, in the end, the key question about the project:  when you take a rotting piece of real infrastructure and transform it into a public park, do you wipe out the very identity that make the place worth saving?

And make no mistake, the Trail exists, even today.  As Borrelli relates, although every single one of them are illegal trespassers, the Trail attracts a large number of people who see past the broken glass to walk, jog, and even practice yoga while enjoying the Trail in its very distinctive current state . . .


The old Canadian Pacific rail, which hasn't been used in decades and runs along Bloomingdale Avenue (hence the trail's name), has rusted into chocolate autumn browns. The dark wooden tracks running beneath those rails have splintered. And the ground, littered with broken stones and glass shards, sprouts tufts of lilting greens and long grasses and sporadic fields of dandelions, is so dense in places you wonder if, given a few more decades of unimpeded neglect, a prairie could return to the West Side.

Standing on the Bloomingdale Trail feels like standing inside a Terrence Malick movie.

It is a ruin, and it is real.  What will replace it, in the words of the Trust for Public Land's Beth White, is “a giant, seamless artwork.”  Borrelli counters that it's already art.  “But it's not safe,” is Ms. White's reply.

And there's the rub.  The 606 is a Haussmannian-scaled intervention.  It involves not only the gentrification of the 2.7 mile rail line, but the replacement of a great deal of existing artwork such as the charming dog murals at Churchill Park. 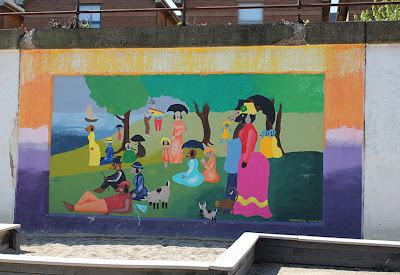 Those interventions happened over time, neighborhood by neighborhood.  Although designed for variations, and with substantial community input, The 606 is a unitary, imposed design which, most likely, will speak less about the Chicago out of which it arose than the Chicago the leadership would like it to become.

What I really like about Borrelli's take on The 606 is how he gets the complexity of architecture, and how its inextricably intertwined with culture, commerce, politics and life as it's lived day-to-day, moment-to-moment.  He has an acute awareness of the larger issues that sometimes eludes Kamin, who often seems most comfortable treating buildings as autonomous objects. 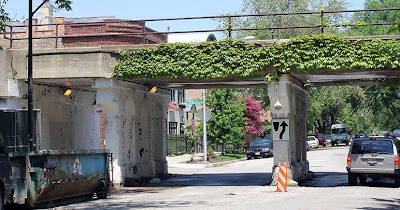 As I wrote on Friday, the new name The 606 is indicative of the pervasive, generic leveling that is a hallmark of our supply chain economy.  The new Bloomingdale Trail, assuming it delivers on its promise, will be a handsome new civic amenity, but, as Borrelli observes . . .


How do you sand down the rough edges of a place like this and make it accessible to the entire community without removing the raw beauty that makes the place so unusual and memorable?


Read:  On the Trail of Art