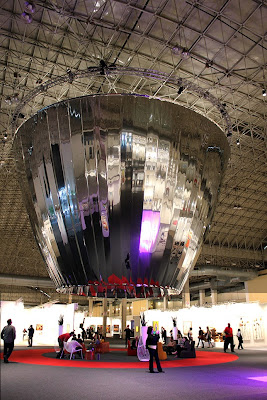 I hate to be the one to break it to you, but summer's ebbing away.  We're only about a month away from this year's edition of Expo Chicago, the big arts show, featuring 120 international galleries, that will again be at Navy Pier, September 19-22.  Last year's design by Studio/Gang will also be back, not something new, but a refinement. The press release quotes Jeanne Gang . . .


This year’s design amplifies our previous experiments using suspended large-scale sculptural elements to define distinct areas for gathering and relaxing, while simultaneously creating an exciting optical experience of the art and activity that shifts as visitors move through the space. Refining the expo floor’s organization (a grid cut through by a strong diagonal pathway) will also increase ease of navigation and further enhance the art’s visibility.

New this year will be the work of Brooklyn's Snarckitecture, with Bend, “a series of upholstered foam cylinders that bend, twist and drape over one another to create a reconfigurable seating environment. Inhabiting a world between collapse and animation, the elongated cylindrical forms create a shifting landscape for relaxation.” Snarckitecture will also be designing a pop-up bookstore for the MCA. 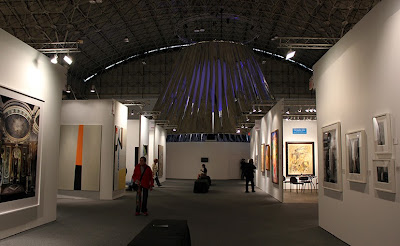 The tracking remaining on next door and dog-tired much of each former observing the workers.