According to the history on the indispensable Chicago-L.org website, there was a station at Cermak for more than three-quarters of a century.  It was one of ten stations along 1892's South Side Rapid Transit, Chicago's first ‘L’ line.  Cermak was never much more than a utilitarian design.  It reached its peak carrying passengers to the Century of Progress Worlds Fair in 1933 and 1934.  As the neighborhood declines in the 1960's, so did boardings at Cermak.  In 1976, hours of operation were curtailed to, ultimately, being open for little more than rush hours.  In 1977, the station closed for good, and was demolished the following year. 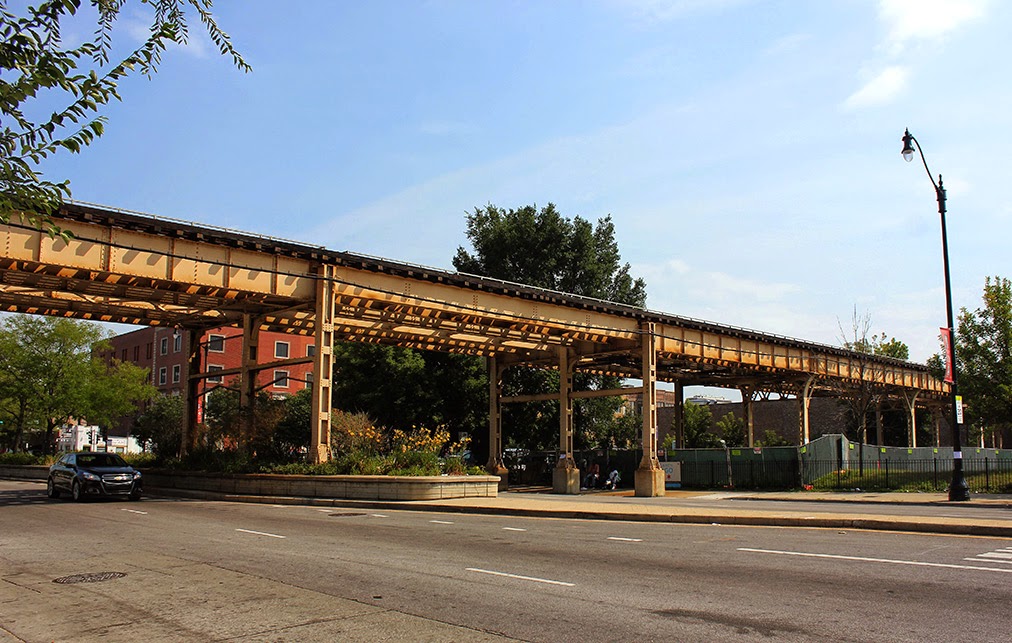 Right now on the Green Line, there's a massive three-mile "no-man's land" gap between the Roosevelt stop, and the next one at 35th.  But things change.  Shortly after the turn-of-the century, Bertrand Goldberg's iconic Hilliard Homes underwent a major rehab.  The former gauntlet of auto parts stores constricted.  For the moment, Blue Star Auto endures as a memorial.  New housing and schools became to pop up, with the coffee shops, hair salons and other signs of gentrification close behind. 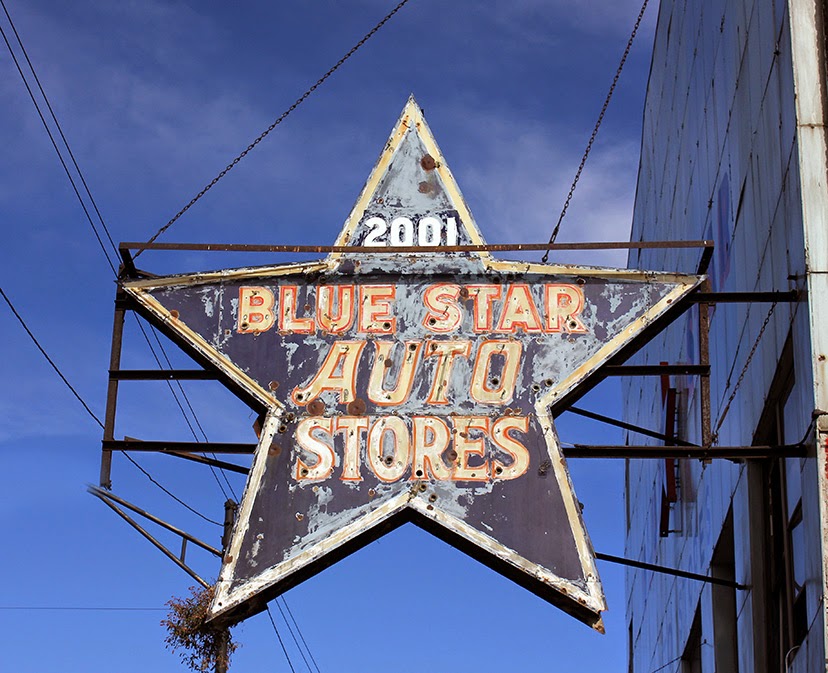 As early as 2002, the CTA began planning to resurrect a station at Cermak.  In 2011, incoming Mayor Rahm Emanuel announced plans for a new Cermak-McCormick Place Green Line Station station to serve both a reviving community and two of the sugar plums he has dancing in his head: a Motor Row entertainment district, and the new DePaul basketball arena.
At a estimated cost of $50 million, which the usual TIF slush fund picking up the tab, the station is   designed by Ross Barney Architects, whose new Green Line station at Morgan Street, became at once a perfectly timed amenity and the visual marker for the booming Fulton Market District. Now, Ross Barney stands to be making the same kind of landmark on Cermak.
The immediate precedent to the Cermak station is Rem Koolhaas's steel tube, created to isolate train noise from his new IIT McCormick Tribune Campus  Center, but there the station is south of the tube.  At Cermak, the station is the tube.
According to Ross Barney architects . . .


The station is to be built quickly, with a modest budget, without suspension of service, and of durable, low-maintenance materials. This portion of the Green Line runs within city blocks on a narrow right-of-way. Tracks could also not be moved and, as a result, narrow platforms would have to serve trains in an area with an anticipated growth in population and transit use. In addition, the client, the City of Chicago Department of Transportation, wanted a “gateway” treatment for this station that is anticipated to serve a high number of first-time visitors to Chicago.

A resolution of the tension in the demands of the project -- Low-cost, speedy construction, no track relocation, narrow right-of-way, and a memorable gateway – was the development of a tube over Cermak Road. Cermak Road is where the right-of-way is widest and also the spot that is most visible to the public. Locating the primary berthing for trains over Cermak Road allows for views to Chinatown, McCormick Place, and Chicago’s Loop. The perforated stainless steel and polycarbonate tube performs multiple duties: Wind and rain protection and their supports are kept off of the platform, creating more comfortably usable space for customers; materials are moved out of easy reach of vandals; and the station is easy to identify from a distance.

Glass, polycarbonate, and perforated stainless steel are used to maximize visibility, views, and natural light in the station houses and on the platform. Where used alone, the percentage “open area”, the amount of material that has been removed, in the stainless steel panels is never more than 23%. With this amount of open area, stainless steel can both provide views to and from the platform and reduce the discomfort of usual winter winds. 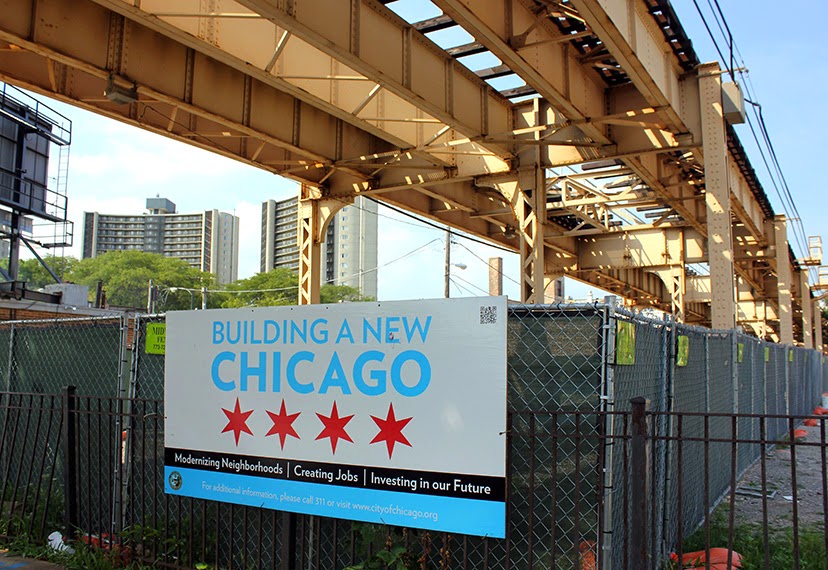 Ground was broken in August of 2013 for what will the 146th CTA station,  will entrances both on either side of Cermak, and at 23rd street. 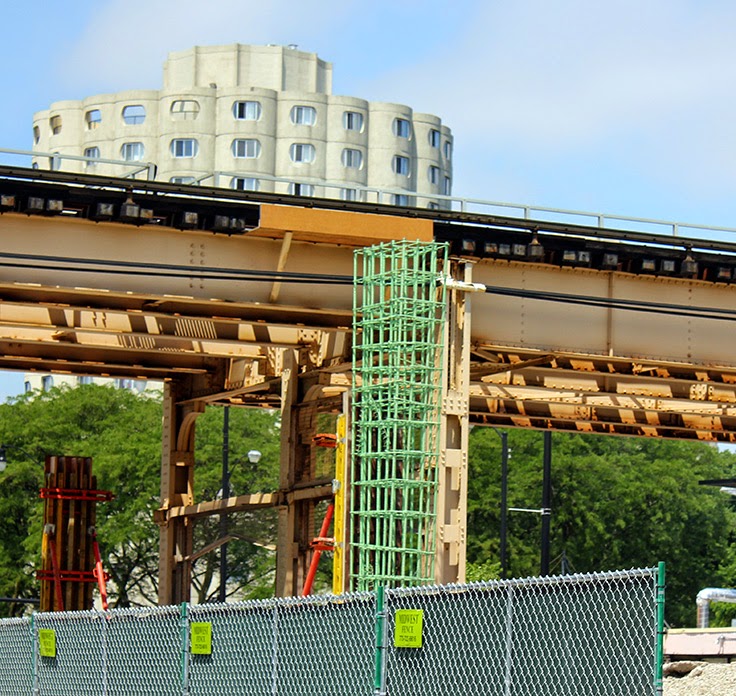 By June of this year, construction was moving along nicely . . . 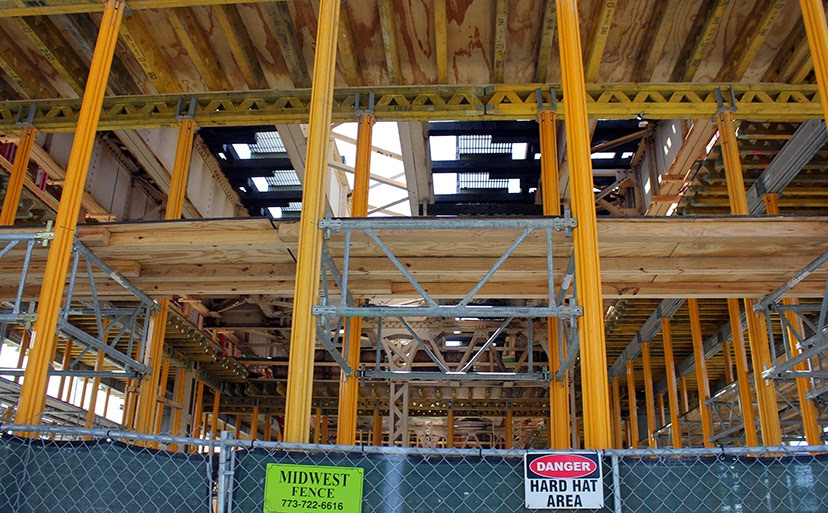 . . . with a whole lot of concrete being poured. 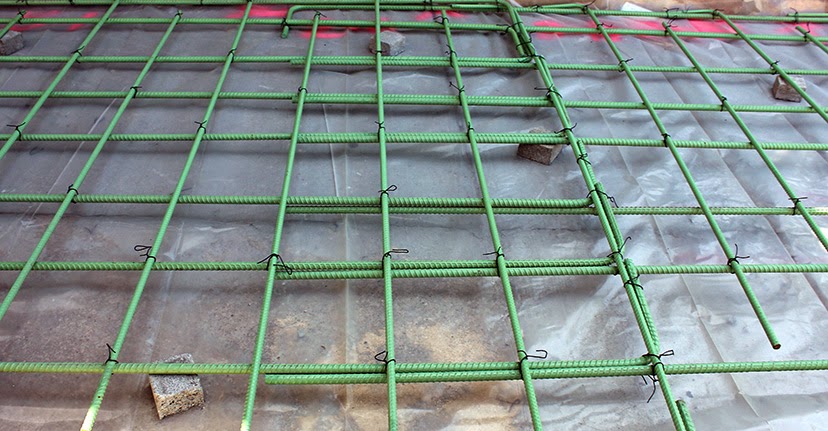 Last weekend, things were coming clearly into shape.  This is what the main station house looked on Saturday . .  . 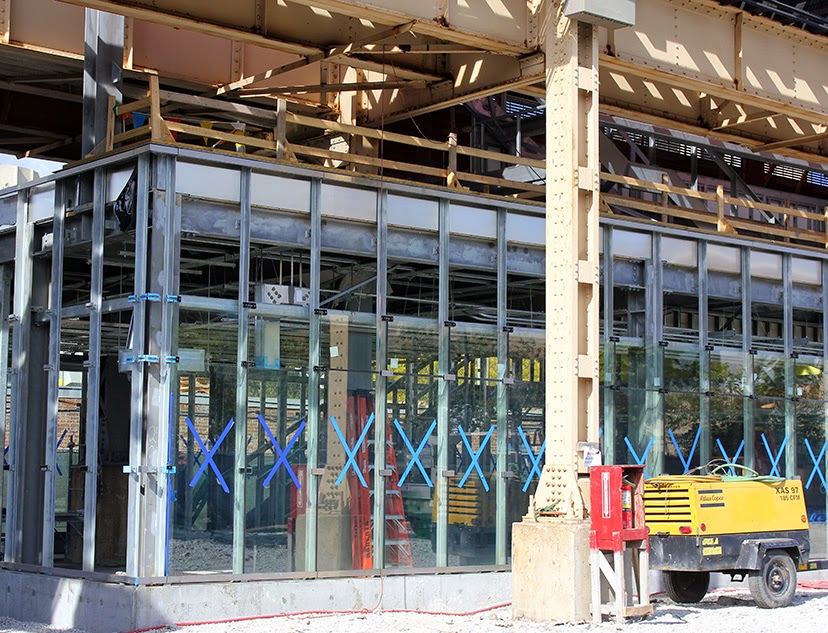 . . . and here's how it looks, completed, in this Magritte inspired rendering in which the entrance leads nowhere - no platforms, stairs or escalators are included in the depiction. 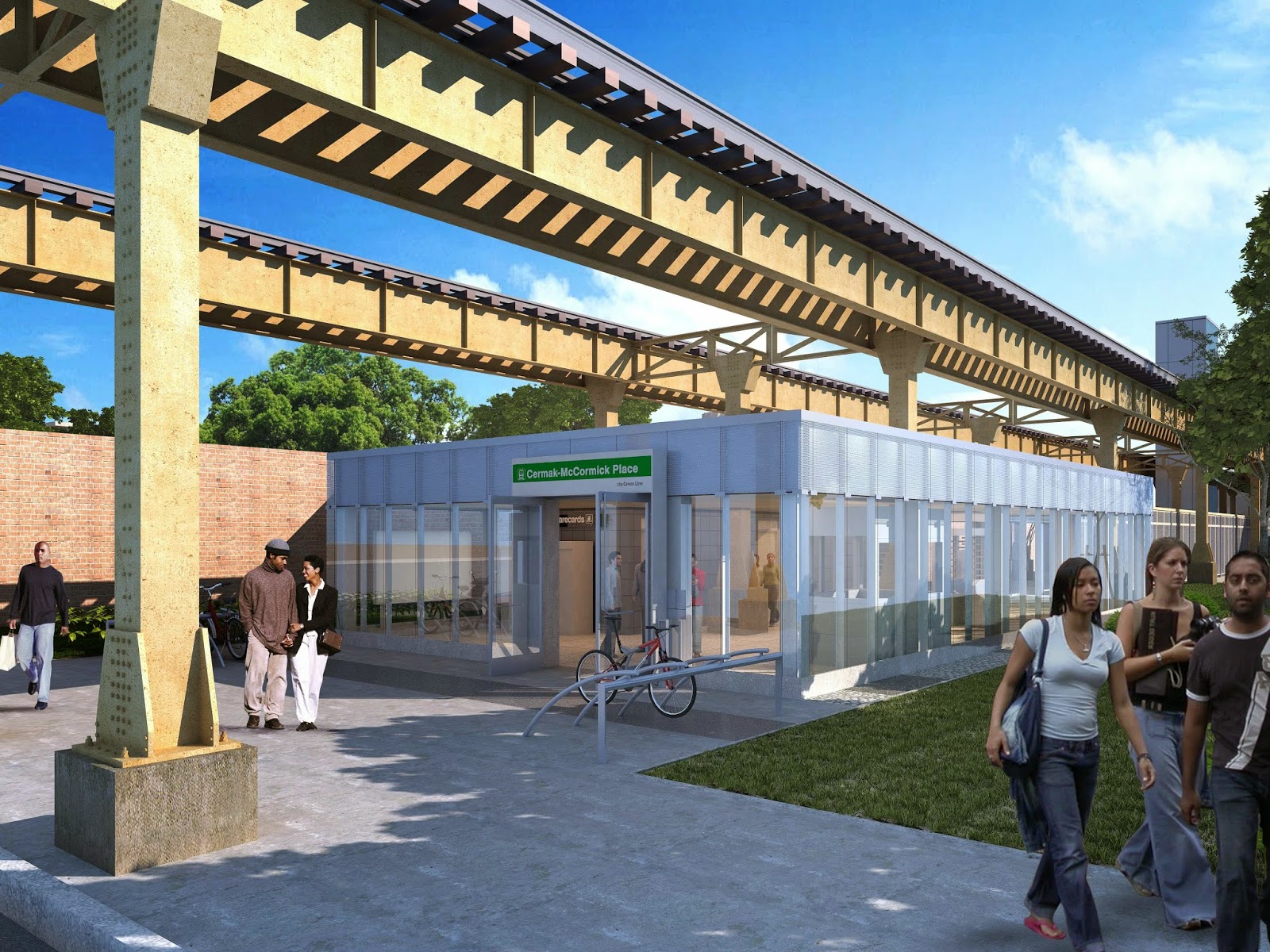 Rest assured they'll be in the finished product, and the elevator tower is now clearly in evidence. 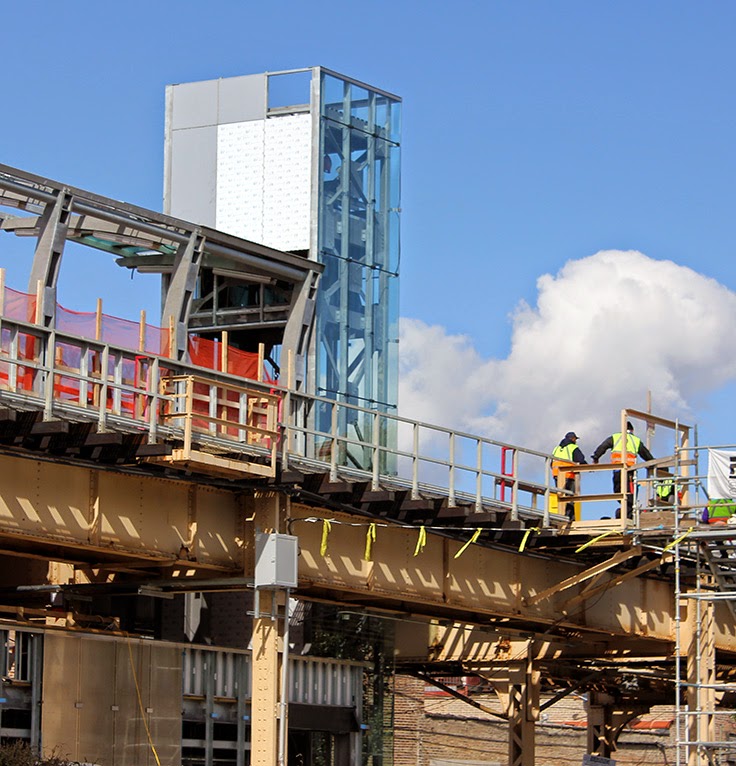 The beauty of the structure is already emerging, both in its light and elegant structure . . . 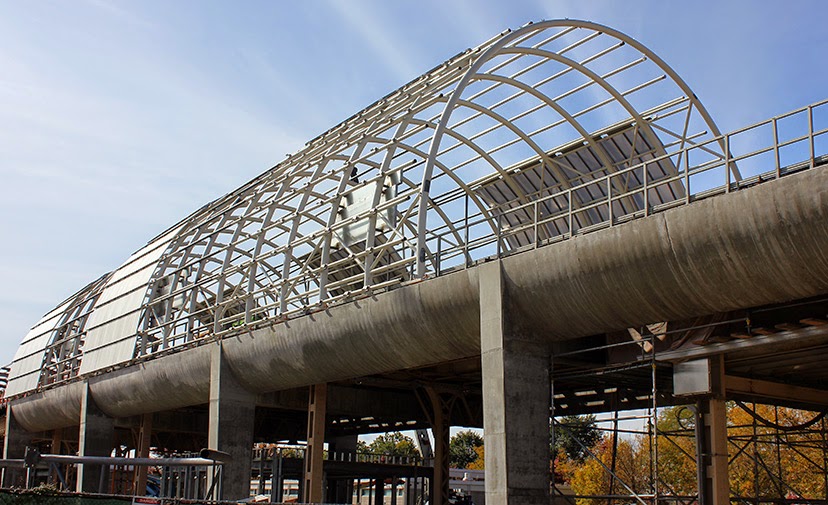 . . . and the way the sunlight glistens through the translucent glass sheathing . . . 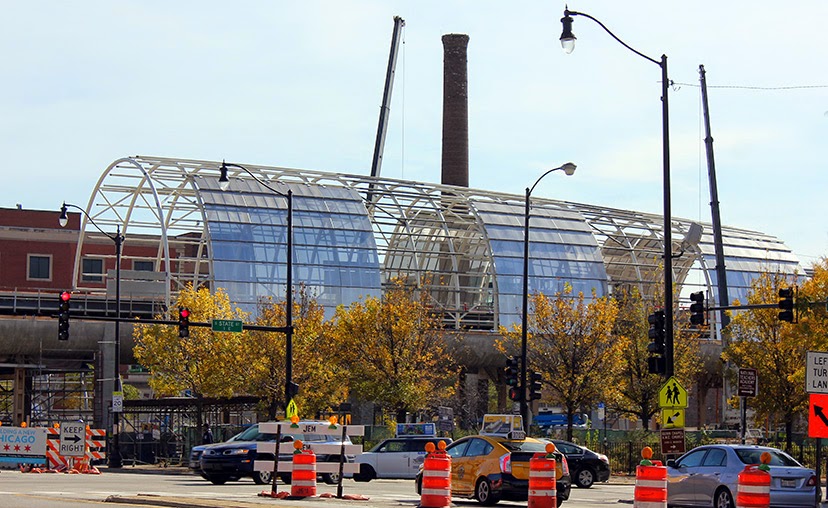 Construction has required ten hour suspensions of Green Line service on a succession of weekends, with the last slated for 1:40 to 11:40 a.m. on both Saturday October 25th and Sunday the 26th. 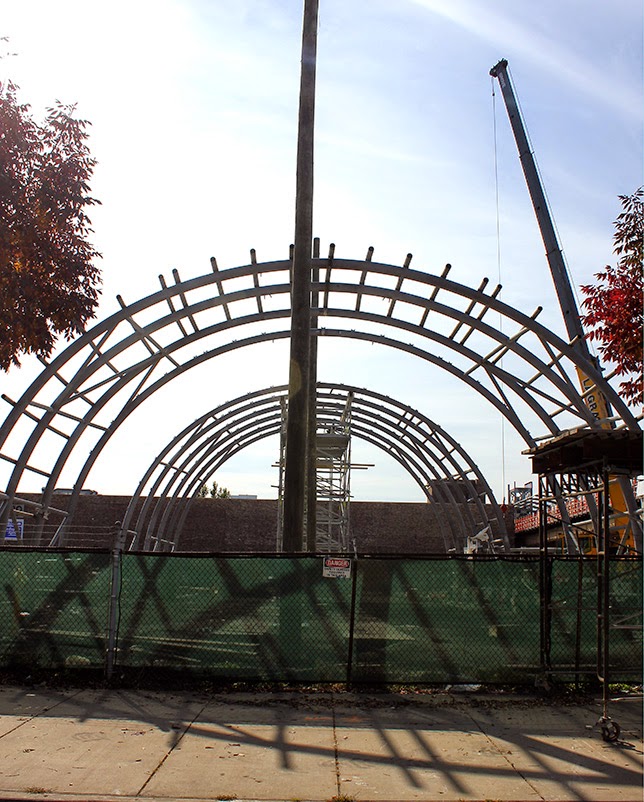 It must be quite a show to see those great arched steel sections being lifted into place. 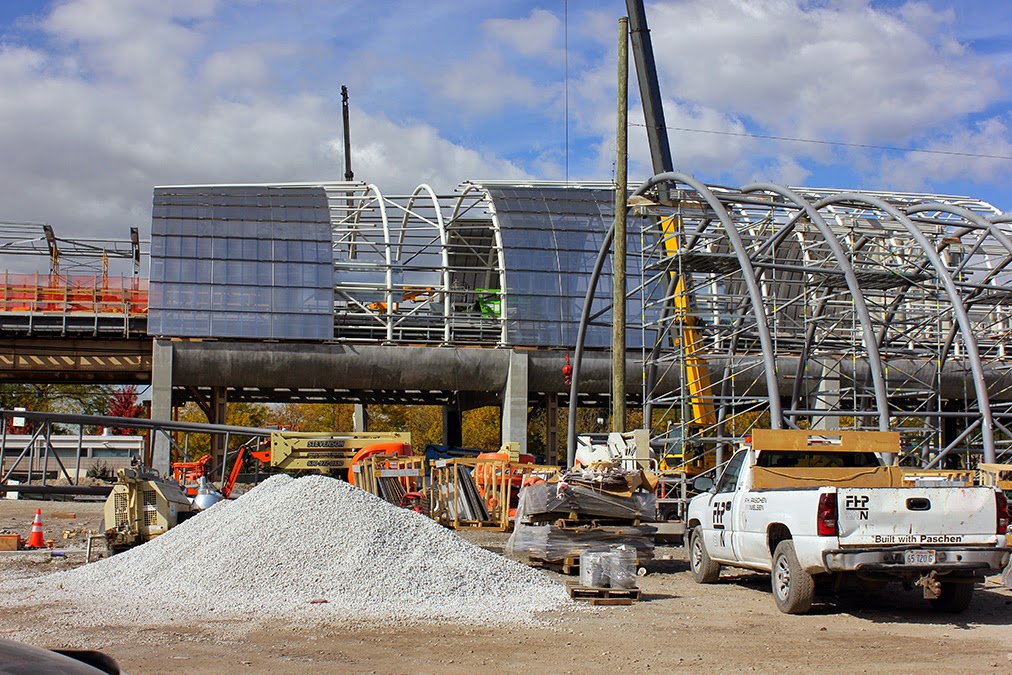 The stated completion time for the project is the end of the year.
Read More: 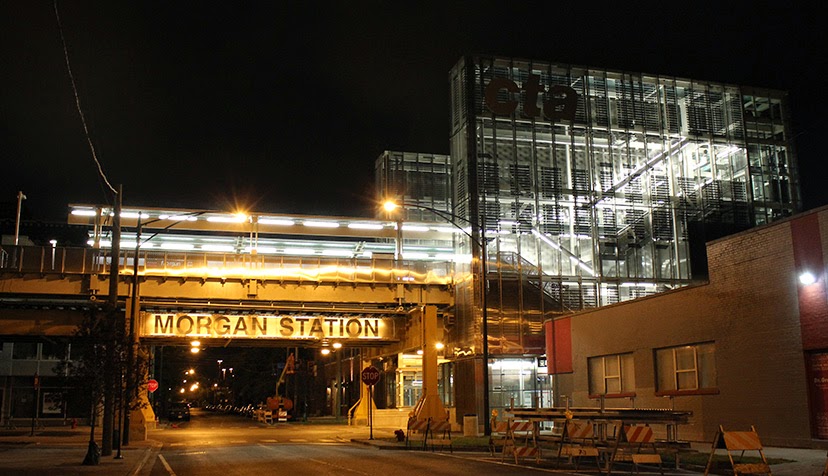 Thank you for the great article. I just wanted to make some clarifications on a couple of things. The image called 'Magritte inspired rendering' is actually the 23rd street entrance house that needed a 'corridor' to the south elevator and the stair towers if you look closely towards back. The 'Tube' enclosure is composed of polycarbonate panels (top) and solid/perf. shingle panels (body). No glass was used in the 'tube'.