Justice and Punishment in Architecture and Performance Art: PARK+96 Acres, Saturday at 26th and California

Do you have a car in shades of black, brown or white? You still have the chance to participate  in PARK + 96 Acres . . .

That complex is like a slough of despond for Chicago's incarcerated criminals, and those awaiting trial in the massive George N. Leighton Cook County Criminal Courts Building. 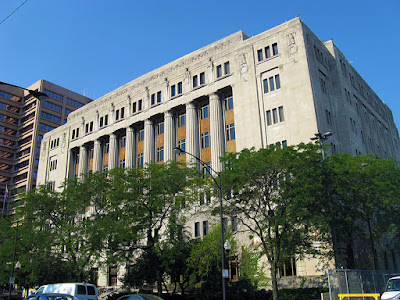 The structure dates back to an opening on April Fool's Day, 1929.  Constructed at a cost of $7.5 million, it replaced the Otto Matz 1893 stone-heavy Courthouse on Hubbard Street, with its gallows courtyards whose hangings gave flavor to the classic play The Front Page.  That Courthouse has been restored as offices, an anchor of Albert Friedman's River North revival.  Where there's a firehouse and Rick Bayless's trendy Xoco Mexican restaurant, there was, back then, the old two-story County Jail, built for more serious offenders at a time when the location was far from upscale and suitably remote from the city's more respectable citizens. 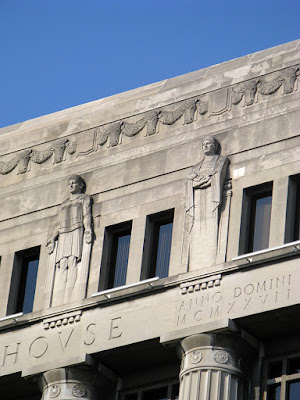 The 1920's courthouse at 26th and California is the respectable front of the 96-acre complex chosen, it was said, because much of the land was owned by connected insiders.  Designed by architect Eric Edwin Hall and faced in Bedford limestone from Indiana, it presents a stripped-down, cleaned-up face for justice, with classical detailing, and along the top floor windows, a series of eight tall stone reliefs by Swedish-born sculptor Peter Toneman depicting idealizations in human form of such ideals as law, justice, liberty, truth, might, love, wisdom and peace.

According to a a 2012 history of the Courthouse by Jason Meisner in the Tribune,  today as many as 12 murder cases can be found being tried in the building's 31 courtrooms. 22,000 cases a year are heard here, with individual judges having up to 300 cases on their dockets. 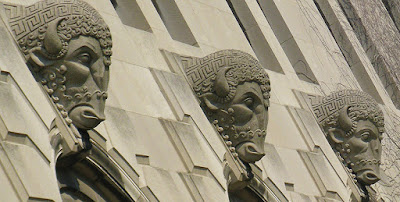 A more accurate depiction of the raw and often brutal power of justice in this factory of despair can be found in the severe animal heads carved along the entrance floor . . .

They could be said to represent the mediation between the ideals of justice and what actually lies behind it, in this case the grim Cook County Jail complex. 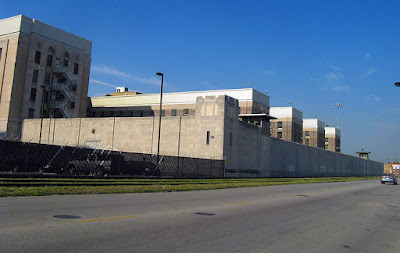 Where the courthouse is imposing and highly finished, the jail complex is stark and forbidding, a series of warehouse barracks dammed up behind high concrete walls.  The new jail had an official capacity of 3,200 inmates.  Today, it houses up to 10,000.  It is nationally notorious for its overcrowding, and for the sometimes violent problems that erupt both within the jail and from it.

That is the history the PARK project, developed by artist and designer Landon Brown for the arts advocacy group 96 Acres, looks to address and personify this coming Saturday.


Evoking the political history of self-organized prisoner rights movements and the complex relationship between culture, community, and spectable, PARK is a vehicle for challenging the politics of representation at a time when incarceration plays an increasing disproportionate role in the lives of specific communities in Chicago and through the nation. 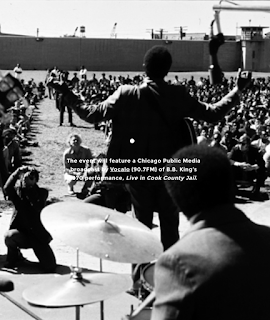 The event will include a rebroadcast, on Vocalo 90.7FM, of B.B. King's performance, Live in Cook County Jail, streamed through the car radios of the hundred participating vehicles.  The colors of the 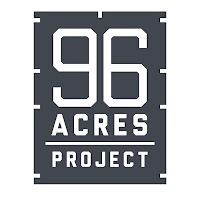 Recording stations will be set up for dialogue and socializing, and to "invite visitors to contribute personal memories and stories connected to the history of the Cook County Jail in relation to Little Village and Chicago's West side communities .  . . These recordings will become part of an ongoing archive by the arts project and PARK collaborator 96 Acres."

The PARK project is still seeking people with vehicles in the requested shades.  Cars must be black, brown or white, and have a working AM/FM radio with speakers.  Owners will should arrive between 11:00 a.m. and 12:30 p.m., and park along South Sacremento. You can sign-up and get more information here .

I'm not sure that 26th and California will be included as part of this year's first Chicago Architecture Biennial, but you won't find a more cogent expression of the power of architecture in depicting the contrast between life as we would wish it to be, and life as it is actually lived.

Peter Toneman (the sculptor referenced in this article) was my great-grandfather. He was not born in Sweden, but in Koblenz, Germany (April 4, 1863). He lived for a time in Ghent, Belgium, and in Paris. He was commissioned to come to Fort Wayne, IN in the 1890's to do work at St. Mary's Catholic Church in Fort Wayne, IN. (Sadly, the church burned down in 1993) He later moved to Chicago. He also did work on the Scottish Rite Temple in Indianapolis, the Archbishop Quigley Statue at the Quigley Seminary on the corner of Rush and Chestnut, relief sculptures on Memorial Stadium at the University of IL, and others. I would love to know where he was trained, but haven't learned that information. He was born April 4, 1863 and died in Chicago on December 22, 1950, only a month after I was born. I wish I could have known him. He is buried in St. Boniface Cemetery. Even though he was an accomplished sculptor, he was not rich. I would love to learn more about other works if anyone has further information. My name is Pam and my email is schroeder1110@yahoo.com.

The chief designer at Eric Hall Associates on this and many late 1920's projects was Ralph W Hammett. In his portfolio is a very nice B&W photo of the Cook County Criminal Court Building. After loosing his job in Chicago at the beginning of the depression, he went on to a long career in academia teaching the next generations of architects at the U of Mich. He was also one of the Monuments Men in Europe in WW2, among the first three to land at Normandy several weeks after the invasion began.