The White and the Black: Mies's Federal Plaza overrun with Dîner en Blanc

I knew what was up the moment I saw them at the Fullerton L stop.  Young people, elegant dress, all in white, carrying food, wine and flowers.  I had seen it all before.  Two years ago, to be exact, when I came upon similar groups making their way up Michigan Avenue.

So I followed them.  I had to follow them, because of the entire group, only one person knew where they were going, and they weren't telling.  The mystery is part of the deal.  We wound up getting off at Jackson, and once up on the street, you could see the passersby stopping and taking a puzzled look at the now multiplying globs of dressed-to-kill humanity narrowing in on their objective.
By the time I got to Adams street it had become an almost continuous parade, honing in on the ultimate, now disclosed location, the west plaza of Mies van der Rohe's Federal Center. 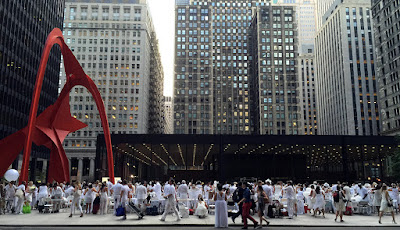 If you haven't guessed by now, what I was observing was not some unworldly cult, but this year's  Dîner en Blanc, the Chicago edition of an annual event that began in Paris 27 years ago with a picnic at the Bois de Boulogne where the guests were told to wear white so they could more easily find each other.  According to Celia Rodriguez in Forbes, the event has now spread to over 70 cities worldwide, and in excess of 100,000 attendees. The event is invitation-only.  This year's Dîner along the Hudson in New York drew 5,000 participants - and had a waiting list of 35,000. 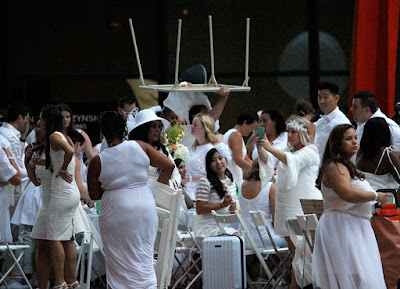 I'm not sure I saw a single black face in this official promotional video.   At the Federal Center people of color were more in evidence, although men appeared to be seriously under-represented.  What the video demonstrates, despite its boosterish editing and music (turn off the sound), is how Dîner is to a large degree an architectural encounter.  Such see-and-be-seen elegance requires an appropriate stage set, and Dîner events clearly seek out the most spectacular venues in each of its cities.  Last year, it was Jeanne Gang's Lincoln Park Nature Boardwalk.  Two years ago, it was at Pioneer Plaza, where the celebrants dined and danced enveloped by the Equitable Building to the east, Tribune Tower to the North, Illinois Center across the river to the South, and the floodlit Wrigley Building towers to the west. 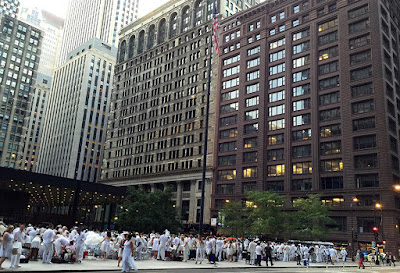 This year, the setting included not just the Federal Center, but Holabird and Roche's landmark Marquette Building, and the patchwork-repaired facade of Burnham's Edison Building. 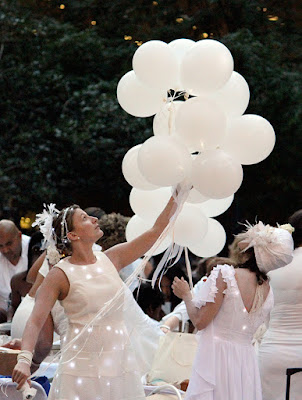 Amidst all the food and wine and other beautiful young people just like yourself, architecture may not be the first thing on your mind, but the buildings and infrastructure are so omnipresent that over the course of the evening they become absorbed.  They become a part of you.  The feeling of being within their embrace stays with you, much as after spending days on a boat, you still feel the rocking when you next go to sleep on dry land. 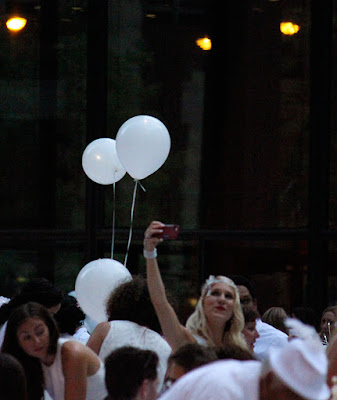 For those of us who visit the Loop on a regular basis, or work there every day, the great buildings often disappear into the blinders of our rote journeys.  And for some, Mies's masterworks have become the poster children for a depersonalizing modernism. 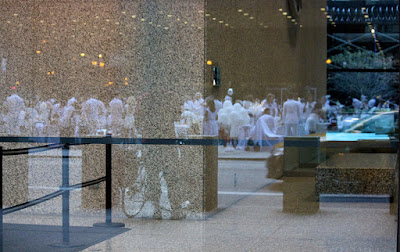 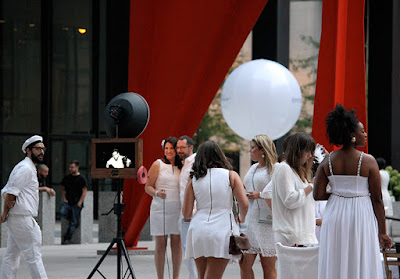 Zoom out and you saw the bees on holiday, happily partying beside the spectacular hives they had constructed.  Implicit are the ethical and experiential questions.  Imposing or crushing?  Demoralizing or enabling?  Mies loved the grid, both horizontal and vertical, but transparency was his watchword.  Scale, too.  The dialectic between the tall Klucynski Building tower and the single-story, single-room post office.  One a bastion, the other an "almost-nothing" structure of near-complete openness. These were your dinner companions no less than the people sitting next to you. 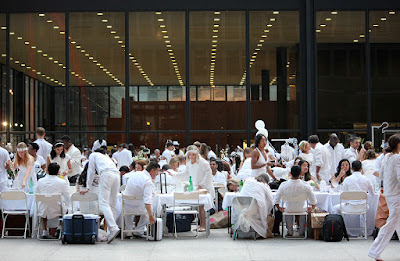 The great white swarm overrunning the Federal Center plaza confounded and complimented Mies's dark, black, continuous steel i-beam personification of order out of chaos, with Calder's Flamingo rising up and pulsing red with the gathered desire of its beating heart 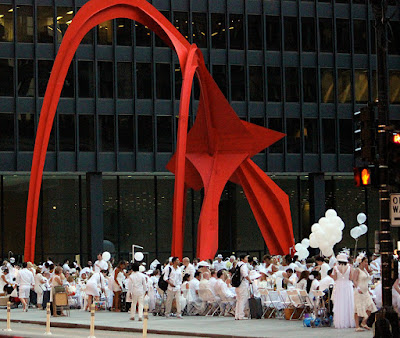 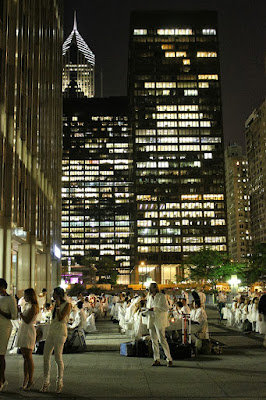 Interesting performance! I hadn't heard of Diner en Blanc - will definitely have to look into why they do what they do. Thanks for sharing.

We do it because we love it!

As may have guessed, there is a Chicago architect on the board of directors...

Beautifully written - you have captured the essence.