For Labor Day: Hiding in Plain Sight - the Chicago Federation of Musician's Building

[Update: May 2017].  Lisa Bertagnoli of Crain's Chicago Business reports that efforts  to maintain a museum in this space were suspended in 2016.

Many monuments of the labor movement can no longer be found.  That includes Solon Spencer Beman's Arcade Building in the company town of Pullman, now part of Chicago's far south side.  The photograph below is from the 1894 Pullman strike, called after the sleeping car company drastically cut wages while refusing to lower the rents it charged employees forced to live in the company-owned housing.  The Arcade is fronted by a cordon of National Guard troops called to break up the strike,  with a second cordon of observers waiting to see if actual shooting will break out.  The Arcade Building no longer exists, but not through any action of the workers.  It was left to rot, and was demolished in 1926.  President Grover Cleveland broke the strike with the U.S. Army, and signed legislation making Labor Day a national holiday six days later. 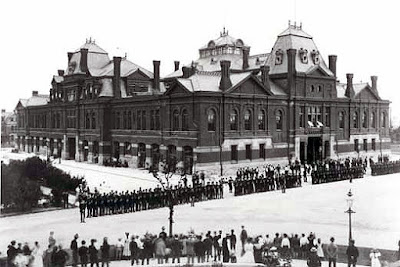 At the top of this post is a photograph is another, more modest building, another case of Chicago's labor history hiding in plain sight.  It was built in 1933 as headquarters for then-powerful Chicago Federation of Musicians, headed by James Petrillo of bandshell fame, who in the 1940's would  ban union members from making recordings.

The building was designed by architect Nelson Max Dunning, the Wisconsin-born architect, who, in partnership with his brother Hugh also designed such Chicago landmarks as the American Book Company on Cermak and the blue-roofed Furniture Mart (now the residential 680 North Lake Shore Drive).  The upper two floors are clad in limestone, the first in polished marble, with a bronze-framed entrance and a large recessed storefront.  Income from the store rental was designed to help finance the operation of the building. 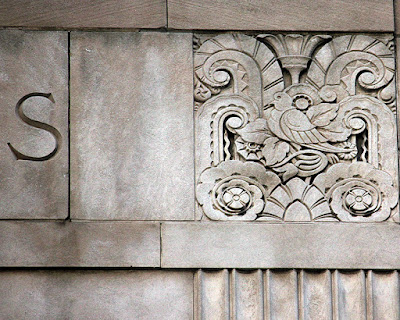 The design includes restrained ornament at the roofline, and along the three tall second floor windows, a series of three carved stone reliefs . . . 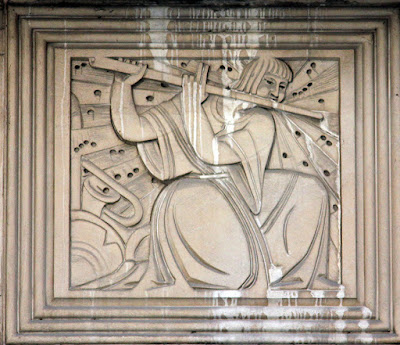 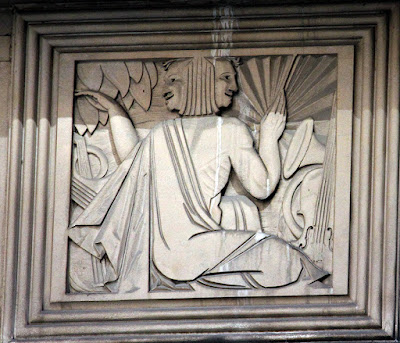 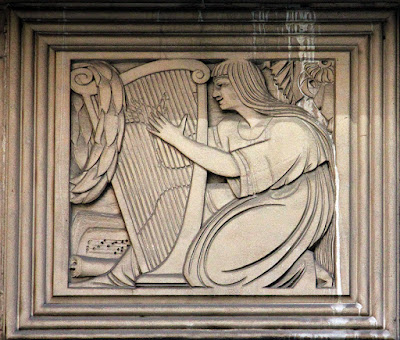 Appropriately enough, for years the retail tenant was a record store, most prominently the Loop outlet of Rolling Stone records,  The building was auctioned off in 2010, and is now owned by the National Museum of Health + Medicine Chicago the Chicago outpost of the National Museum of Health and Medicine  in Silver Spring Maryland,  founded in 1862 as the Army Medical Museum when Civil War field medical officers were asked to gather "specimens of morbid anatomy together with projectiles and foreign bodies removed" for the collection.

The Chicago museum, at least so far, has high ambitions and a low profile.  According to a a 2011 report by Lisa Bertagnoli in Crain's Chicago Business,  it's the brainchild of Chicago native Michael Doyle of Eolas Technologies, an inventor and patent troll who reportedly reached a $100 million settlement with Microsoft over patents that claimed to own the idea of an interactive internet.
According to Bertagnoli, the Chicago museum had an ambitious $45 million fund-raising goal - seeded by $3 million from Doyle - with an April 15, 2015 opening date.  Adrian Smith + Gordon Gill Architects came up with an innovative design concept for the building that promised . . .


a new kind of museum that, in keeping with its purpose and theme, is itself a living organism, both metaphorically and in terms of sustainable energy generation. As they pass through the interactive interior spaces, visitors will uncover layer after layer of information about the human body. And like nutrients within a body, visitors will generate energy for the building via developing technologies such as a heel-strike system, which harvests the force produced by foot traffic. That power will then be visually expressed in various forms, on interior surfaces as well as on the building envelope. When the museum is lightly populated, for example, it will exude a quiet energy; when it’s buzzing with activity, it will visibly flicker and pulse with the physical presence of its occupants.

The design included a translucent graphic membrane wrapping around the buildings corner, and a new rooftop cafe.

April 15th has come and gone, and while the museum has hosted a number of events, the building remains very quiet.  None of the external enhancements are in evidence, and the interior is being shopped around as a private event space.  The website lists constricted hours three days a week "open to local businesses and local academic institutions".
The intended design would be a striking addition to a rather dull stretch of Washington Street.  All it needs is a lot of money, and a crew of skilled laborers to bring it into being. 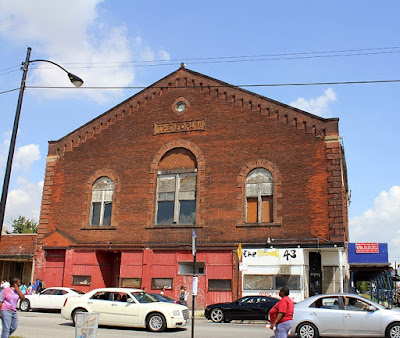 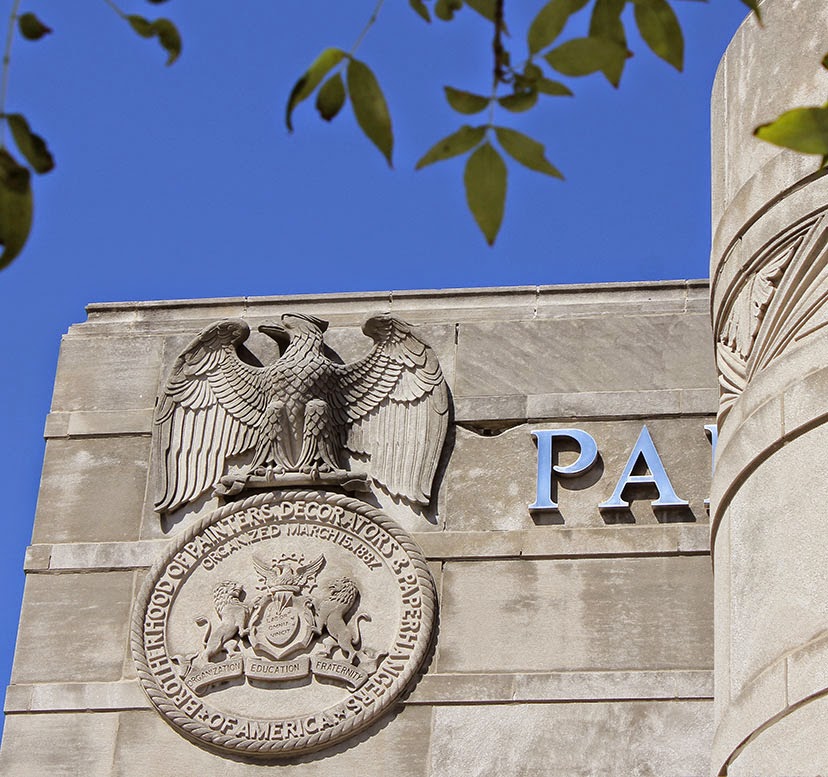