As best as I can tell, not so much as an inch of Chicago's lakefront has any continuity to its original natural state, its shore was restlessly reshaped to meet the successive needs of explosively compounding metropolis.  Today, you'll find hardly a trace of original sand dune edge or the lowland marshes in which the stinky onions grew wild 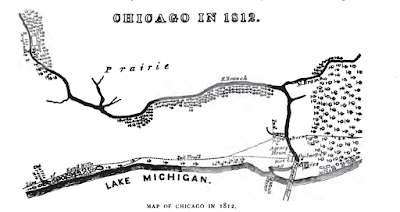 Chicago Park District historian Julia Bachrach estimates that over the city's history, over 2,000 acres of new land has been added to the city's lakefront.  In places the today's shoreline is a full half mile east of where the first European explorers had found it.

This is the case with Fullerton Point, an outlet of land where Fullerton Parkway meets the lakefront.  It began its life late in the 19th century as Picnic Island, a tract of land bounded by the lake, the Lincoln Park lagoon to the west, and waterways connecting the two to both the north and south.
In a time when tuberculosis was an often deadly disease, 1887 saw the creation of the Chicago Daily News Sanitarium, financed by fund drives mounted by the powerful  Chicago newspaper.  For a detailed - and richly illustrated story of the sanitarium, see Cynthia Matthew's This Haven of Rest and Health, published in the Spring 2000 edition of Chicago History, from which the above aerial shot of Picnic Island was taken.

The sanitarium was created to serve the children of Chicago tenements, providing a seasonal refuge from summer's heat and increased pollution.  The original building,  designed by Burnham and Root, was open to lake breezes and constructed on 150 concrete pylons.  A ramp connected it to the mainland, serving both to give its young patients the benefits of the fresh air and keeping them safely isolated from a population fearful of contagion.

In 1914, a larger replacement facility opened on Picnic Island,  Minus its perpendicular entrance wing, sheared off in a later park improvement, this is the structure that still exists today.  Designed by Dwight Perkins in the Prairie Style, with steel arches encased in brick, the facility has 250 basket cribs for babies, and nurseries and other rooms to support the care of older children.  It served more than 30,000 children every summer, until its 1939 closing. 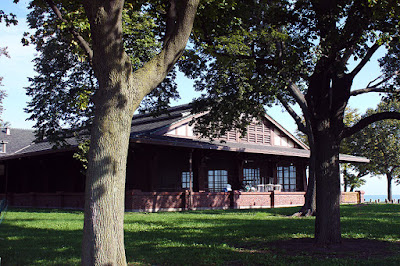 During World War II, the building was used as a USO Center, and was later turned over to Theater on Lake, which has mounted productions in its often steamy, un-airconditioned space since 1952.  Exiled to other venues during the point's reconstruction, Theater on the Lake is scheduled to return a building that will now be fully air-conditioned. 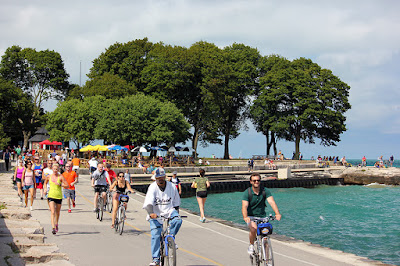 Seen from the south, Fullerton Point provided a visual punctuation point to the lakefront promenade, its trees signaling the season through their change of color. 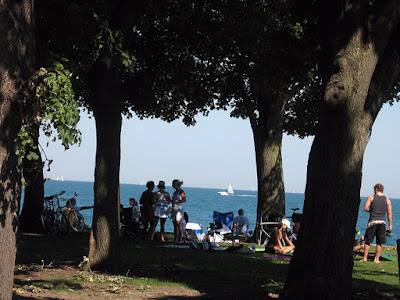 At the southeast corner of the point was a rough, tumble-of-rocks outcropping with spectacular clear views out to the lake and the city skyline to the south. 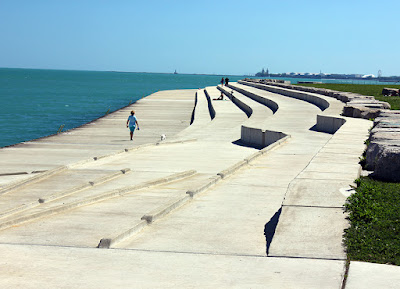 Since 2000, the Army Corps of Engineers has been in the process of completely rebuilding - and sanitizing - Chicago's lakefront as part of a $300 million shoreline protection project.  19 of the 23 segments of the 9.5 mile project have already been completed.  Last October, ground was broken on the $31.5 million Lake Shoreline Protection Project to expand and stabilize Fullerton Point.

The previous revetment was built between 1910 and 1931 out of wood piles filled with stones.  By the 1950's, the piles had begun to collapse, and record low water levels in 1964 exposed them to the air, accelerating the rot.

As much as a case of its seawalls crumbling, Fullerton Point had come to be seen as a traffic problem.  Increasing pedestrian, skate and bicycle traffic combined to create a choke point where the paths met Lake Shore Drive underpass at Fullerton Parkway. 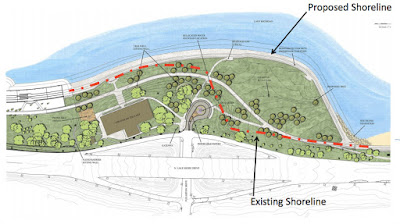 The solution was to wrap the old point in a new point, adding 5.8 acres of parkland extending about a hundred feet south, allowing for a pair of paths that keep bicycle and foot traffic separate.   The result will be a new, 1,700-foot-long revetment. 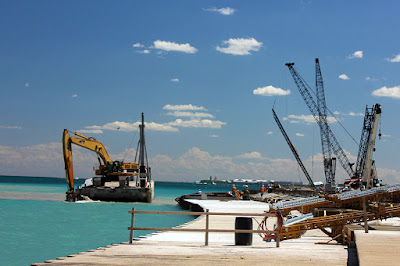 This creation of more of Chicago is a spectacle in itself. 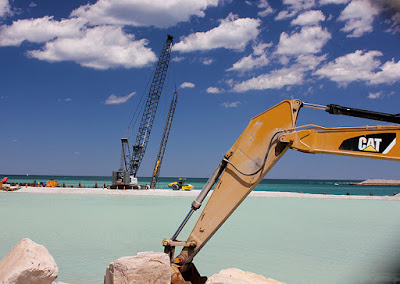 According to a report by John Greenfield on StreetsBlog Chicago, the piles are pounded up to 45 feet into the lake bed. Right now, an estuary of "milky turquoise" water - the color coming from sediment - awaits being filled up 80,000 cubic yards of rock and sand to create the new land. 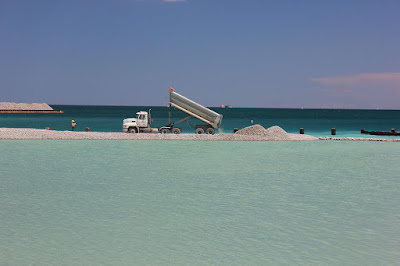 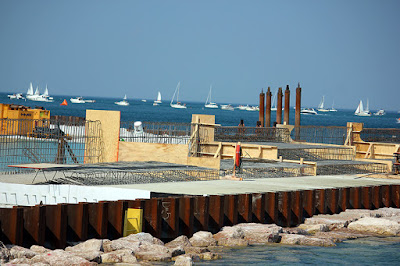 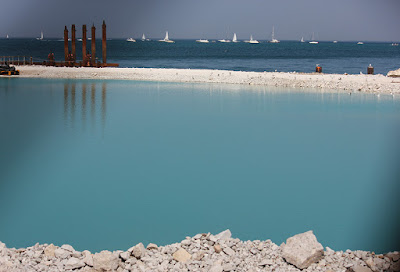 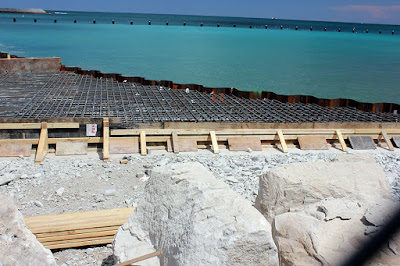 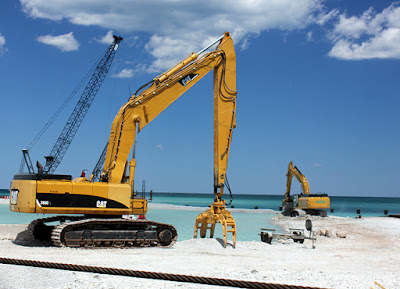 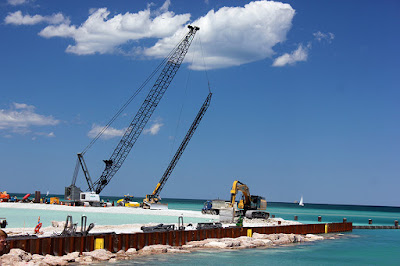 The new seawall will extend the Army Corps infatuation with the stepped expressway school of lakefront promenade design. 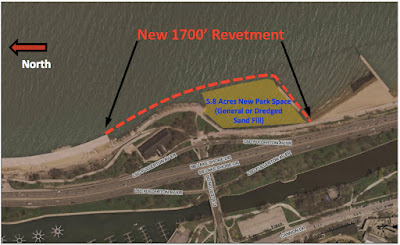 Once Chicago's lakefront mostly looked like it does at Promontory Point . . . 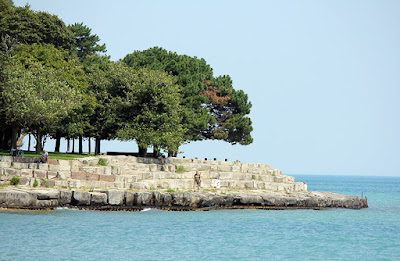 While the Corps was hell-bent on making remodeling the lakefront in its cookie-cutter image, they hadn't counted on the orneriness of those contrarian Hyde Parkers, who have mounted a major battle against the generic designs of which The Corps is so fond. 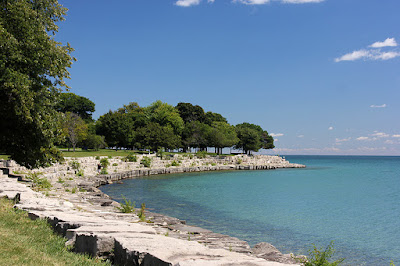 The expressway lakefront, as smooth as a concrete contractor's bottom, continues its Sherman's march down the length of the Chicago lake shore, but Promontory Point is where the forward advance has slowed, if only for a moment. 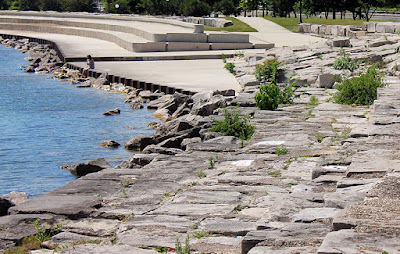 It's all about efficiency.  The stepped designs are supposed to provide protection against Chicago's increasingly frequent and severe winter storms and the erosion threat they represent.  And to keep the traffic moving.  And there can be no question but that the relentlessly homogeneous promenade has its own beauty, as insipedness magnified to massive scale often does. 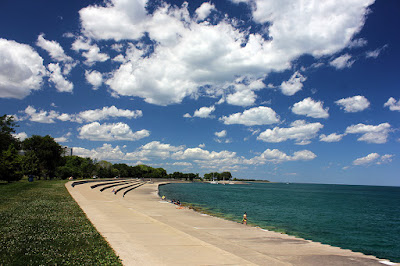 Still, you'd like to think that somewhere along Chicago's lakefront, there's still room for a poetic expression of the the rough nature out of which a great city grew.