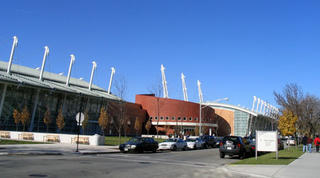 In a belated note, the Structural Engineers Association of Illinois announced its 2005 Excellence in Structural Engineering Awards during its June awards banquet aboard the cruise ship Odyssey. Best Large Structure went to OWP/P for the Ratner Athletics Center, designed by Cesar Pelli on the University of Chicago campus. Best Small Structure was won by Baldridge & Associates for the BASE Hanger System constructed in Oaha, Hawaii, while the Most Innovative Award went to Magnusson Klemencic Associates for Rem Koolhaas's new Seattle Public Library.

For a full list of awards see the text of the SEAOI press release, which is included in the first comment to this thread.

The Structural Engineers Association of Illinois (SEAOI) announced the 2005 Excellence in Structural Engineering Awards during its Annual Awards Banquet. This marked the 26th anniversary of the program recognizing excellence in structural engineering. Winning projects have been recognized throughout the United States and the world.
Winning the 2005 Best Large Structure Award was OWP/P Structures for the Ratner Athletics Center constructed in Chicago, Illinois. One SEAOI judge stated that this project used a “distinctive approach for providing column-free space by pushing the envelope with cable design.”
The 2005 Best Small Structure Award was won by Baldridge & Associates for the BASE Hanger System constructed in Oahu, Hawaii. One SEAOI judge commented that the structural design was “an economic solution to one of modern day’s dilemmas – how to prevent progressive collapse under a terrorist attack.”
The 2005 Most Innovative Structure Award was presented to Magnusson Klemencic Associates for the Seattle Central Library constructed in Seattle, Washington. This project was described by one SEAOI judge as a structure composed of “astonishingly creative solutions in service of a highly original architect’s vision.”
Awards of Merit in the Large Structure category were presented to Halvorson & Kaye/Structural Engineers, P.C. for the Hyatt Center constructed in Chicago, Illinois and to Skidmore, Owings & Merrill, LLC for the Jay Pritzker Pavilion and BP Bridge at Millennium Park constructed in Chicago, Illinois. An Award of Merit in the Small Structure category was presented to Wiss, Janney, Elstner Associates, Inc. for the Marquette Building constructed in Chicago, Illinois and to Alfred Benesch & Company for the I-74 Arched Pier Bridges constructed in Peoria, Illinois.

2005 John Parmer Award
The John Parmer Award is named after the late John Parmer, who was a founder of SEAOI and served as its first executive director. Mr. Parmer felt that structural engineers had received insufficient recognition both publicly and financially for their important role in creating our constructed environment. As a memorial to their late father, the family of John Parmer has endowed this annual award recognizing an individual whose career has been acknowledged by his or her peers as an example of excellence in the field of structural engineering.
The 2005 John Parmer Award was presented to John M. Hanson. Dr. Hanson has contributed substantially to the structural engineering community through his long and very productive work career at the Portland Cement Association, Wiss, Janney, Elstner Associates, Inc. (WJE) and North Carolina State University.
During Dr. Hanson’s career, he has served clients on many high profile and nationally recognized projects. In addition, he has also had a large effect on the colleagues that he knew and mentored. He was also elected President of the American Concrete Institute and served as chairman of Committee A2CO3 (Concrete Bridges) and A2C00 (Structures) of the Transportation Research Board (TRB), and Vice President of the International Association of Bridge Structural Engineers. Additionally, Dr. Hanson was chairman of the ASCE Technical Council on Codes and Standards. Dr. Hanson also served as President of WJE for 13 years.
Dr. Hanson was a co-recipient of ASCE’s 1974 State of the Art of Civil Engineering Award and of the 1976 Raymond C. Reese Award. He currently is an Affiliated Consultant with WJE and a member of its Board of Directors. He is still active in the company operations on a part-time basis, but more importantly, he is still mentoring, training, and guiding structural engineers. Dr. Hanson is a structural engineer whose distinguished career is indeed acknowledged by his peers as an example of excellence.


Additional Information
Questions about the awards program should be directed to the SEAOI office at (312) 649-4600 ext. 200. Detailed descriptions of current and past award winning projects and project photographs may be obtained from the SEAOI office.
Awards Program to Continue
The awards program will continue next year. Early in 2006, the “Call for Entries” brochure will be mailed out to all members of SEAOI. The initial judging selection of finalists will occur in April 2006, with final oral presentations scheduled for May 2006.
Those individuals seeking additional information about next year’s structural engineering excellence competition should contact the SEAOI office at (312) 649-4600 ext. 200 or visit SEAOI’s website http://www.seaoi.org.

Roberto Iza Valdés said...
This comment has been removed by a blog administrator.
1:10 PM

Roberto Iza Valdés said...
This comment has been removed by a blog administrator.
8:09 AM

Juno-Regina said...
This comment has been removed by a blog administrator.
11:09 AM

Roberto Iza Valdés said...
This comment has been removed by a blog administrator.
3:19 PM