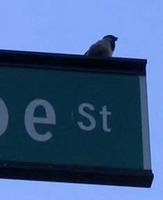 Migratory bird season is here again in Chicago, sometimes described as the "O'Hare of migratory birds." It's not a happy time for countless birds who meet their end smashing into Chicago's glass-walled buildings, so we're going into the vault for a story on an April, 2004 symposium where activists and experts like architect Jeanne Gang, Robbie Hunsinger of Chicago Bird Collision Monitors and David Baker of IIT talked about the problem and what they were doing about it. With September, 2005 updates. Read all about it here.
(Click on time for permalink) 12:01 AM

New York appears to be doing its part too.

I think this is the only time I came across this topic of bird migration in blogs. This is interesting information. I never thought it could be such a problem.