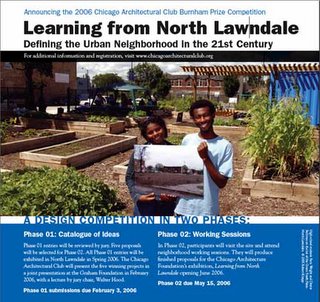 The Chicago Architectural Club has announced the theme for the 2006 Burnham Prize Competition: Learning from North Lawndale - Defining the Urban Neighborhood in the 21st Century. There is no specific program, but addresses the challenge of North Lawndale's 5,000 vacant lots, half of them owned by the City of Chicago. The competition seeks entrees "that address these lots or the or the urban fabric in-between."

Registration closes on January 20, 2006, and Phase One entries will be due next February 3rd. The first round jury, to be chaired by landscape architect Walter Hood and including architect Kerl Lejeune of Booth/Hanson and a balance of members to be named 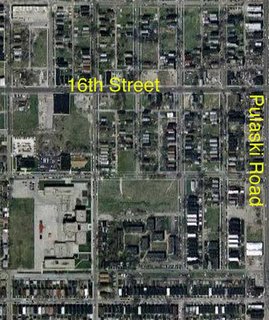 later, will narrow the entries down to five finalists. Second phase entries will be due May 15, 2006. The prize for the winner is an extended fellowship at the American Academy in Rome for the Fall of 2006. Full information, including program, materials and download, can be found on the CAC's website here.