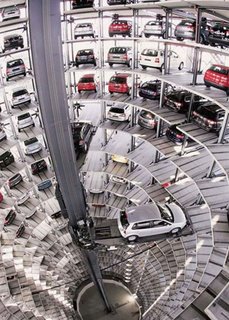 Courtesy of Design Evanston's David Galloway and all the fine folks at skyscraperpage, here's a few photos on the striking Hochregal-Lager autopark structure designed by HENN Architekten for Volkswagen in Wolfsburg, Germany. It's part of the Autostadt, which is described by one posting from Nexus6 as a "technology theme park". The all glass facade makes the automated process of storing and 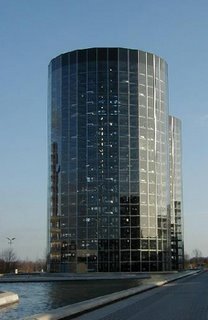 discharging cars a bit of street theater. As Autostadt's website describes it, "Collecting your new car is an event in itself. The best idea is to 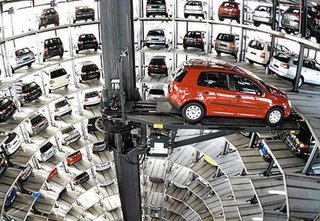 begin that special day with a relaxing trip to Autostadt followed by a tour until the big moment arrives: In a fully automated procedure, your new car is brought down to you from one of the 20-story Car Towers. Large signboards in the Customer Center show you when your turn has come. Then, you're handed the keys, your picture is taken, the glass doors open and your brand-new car appears. You're all set to go." According to Emporis, " Everytime a new car enters the tower, another car leaves it via the automatic underground transport system to the customer center. That happens every 40 seconds."

Maybe beleagured GM should give it a look. It would certainly be a step up from the massive, ugly concrete garages that have blighted so many downtown Chicago streets. 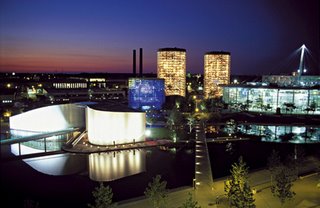 Dirk Lohan proposed a similar thing in Visionary Chicago Architecture, the book put out last year by the Chicago Central Area Committee. He proposed it for Chinatown.

This is an excellent blog. Keep it going.You are providing
a great resource on the Internet here!
If you have a moment, please take a look at my 2006 award much music video site.
Have a great week!

Dear friend, Here is an opportunity for you that is taking over the internet. The compensation plan is second to none. The spill over will blow your mind and the educational products are of the highest quality. Knowledge is power and nobody can ever take that away from you. Join me in this business and see for yourself what you will be getting. Click here: FREE Information