The Two Brads (Lynch and Pitt) on Rebuilding New Orleans 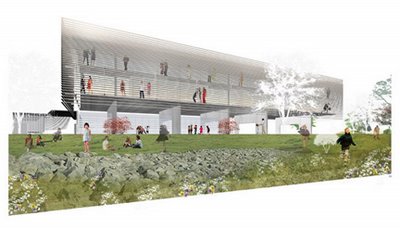 An entry from Brad Lynch of the Chicago architectural firm of Brininstool & Lynch was named Monday as one of six finalists in Global Green USA's Sustainable Design Competition for the rebuilding of New Orleans after its devestation last year by Hurricane Katrina. The competition was co-sponsored by actor and architectural activitist Brad Pitt, who also chaired a jury that included, among others, Walter Hood, Thom Mayne and Marion Weiss.

The competition's goal is to "demonstrate sustainable solutions for the redevelopment of New Orleans." Entrants were asked to submit two boards, the first for a 12-unit family housing structure with "community center features." The second was for a site plan in New Orlean's Holy Cross neighborhood near the levee and Mississippi River, including the placement of six single-family homes.

Global Green USA gets credit for putting the boards for all six finalists up on their website at the same time the first stage selections were announced. (As of today, you have to register to with an email address to see them, which also allows you to cast a vote for your favorite. There's a placeholder on the site for where a gallery of competition finalists may appear later.)

The large competition boards, however, are posted in web resolution, which makes the text and much of the details illegible, leaving us dependent on the jury's comments for descriptions of the projects. The buildings in the entry from Brad Lynch are praised as being "simple yet sensible," and the concept, itself cited for its "creative ideas about energy generation placing solar electric arrays on a barge in the adjacent Mississippi river" and for how "the design raises the living areas off the ground" in anticipation of possible future flooding. Lynch is up against national heavyweights such as Frederic Schwartz - who draws on the tradition of the areas traditional "shotgun" layout for homes, and uses solar chimneys to draw out heat via natural convection - as well as three other firms with roots in New Orleans.

Next week, a kickoff meeting for the competition's final phase will bring together the winning designers with local architects and community groups "to create a plan for selected areas in different neighborhoods of the city," including single-family housing and a community center. The final jury is scheduled for August 30th.