Two years ago, the administration of Chicago Mayor Rahm Emanuel issued a Request for Proposals for the adoption of 49 underused public places owned by the city.  The parcels are all across the city, and range in size from 41,000 down to 436 square feet, with an average of 8,600.  Some, like the Nelson Algren Memorial at Polish Triangle, are long-established public squares.  Others are little more than space underneath the concrete pillars of a raised expressway.

The response was underwhelming. According to a January, 2014 update by Trib reporter John Byrne, there were only four RFP filings - two major billboard companies, Lamar Advertising and CBS Outdoor, and boutique architecture firms Latent Design and architect Carmen Vidal-Hallet's EcoVidal Design.   City officials indicated a decision on whether any of the entrants would be selected would be made within the year.
Instead, it wasn't until this past April that Emanuel introduced an ordinance to create the Make Way for People public plaza program, a public/private partnership to be managed by Latent Design, the firm founded by architect Katherine Darnstadt that already has a long history of public space interventions, from a Mini golf course installed in parking spots along Milwaukee Avenue, to 2013's Blah Blah Blob!, an inhabitable, brilliantly colored fabric tent that set up shop both at Union Station and a later Activate! event next to the Chicago Theater.

Under Activate! Chicago, ten locations are to be activated during the first year, which ends next summer, including at least one for each of five geographic regions into which the city was divided. Another twenty are to be activated in the final two years of the contract.  The initial budget is a measly $50,000.  To put that into perspective, the newly redeveloped Northerly Island came in at about $2.40 a square foot. Divided among the 12.4 acres of the 49 Peoples Plaza sites, that $5,000 comes out to about 9 cents a square foot.  The cost of the new Riverwalk calculates out to $1,163 per square foot. 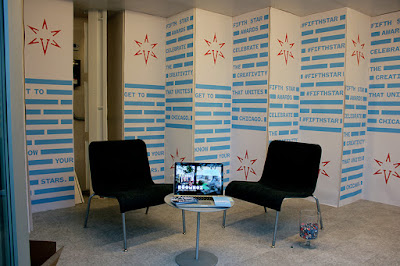 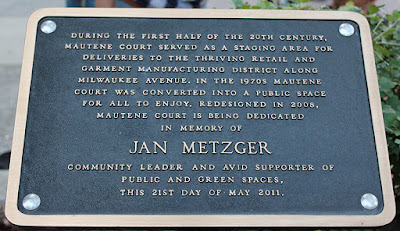 The location was Wicker Park's Mautene Court.  According to a report by DNAInfo/Chicago's Alisa Hauser the plaza at 1260 North Milwaukee was created in the 1970's in what was formerly a staging area for the garment manufacturing industry that dominated the district earlier in the 20th century.  The 175 square-foot kiosk, heated and permitted for retail and food service, was constructed out of a stripped-down shipping container.


Boombox / Between Startup and Storefront from LATENT DESIGN on Vimeo.


. . . came from the south side of Chicago. The company we purchased it from cut down a standard 8x20 for us and removed all four sides and then shipped it to our warehouse for construction. We constructed the Boombox about 75% in a warehouse, then disassembled it to flatbed truck [it] to the site for final install. We cleared underpasses by only an inch. Literally. The Boombox weighs about 5,000 pounds and the exterior panels are the backside of good old cheap Hardie board [a cement board siding]. The pattern is the result of the dying process. 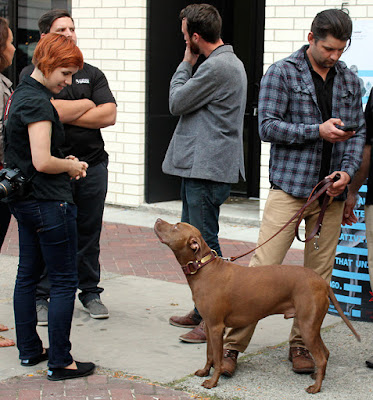 Opening night featured a performance by dancers from the Joffrey Ballet.  Hauser reports Darnstadt herself made use of the kiosk for her own office, with the first tenant is scheduled to be a pop-up library.  Negotiations are ongoing for a retail tenant during the holiday shopping season. 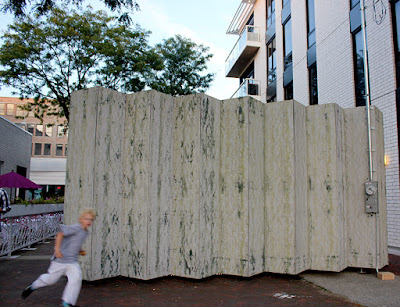 Described as a "new platform for Nomadic retail", Boombox rents for $500 a week, with lease periods of two weeks to three months.  Mautene Court should prove an attractive location, nestled next to Tocco restaurant along the trendy Milwaukee retail strip that mixes empty storefronts with hip retailers, restaurants and theaters. 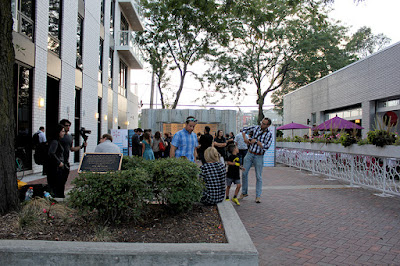 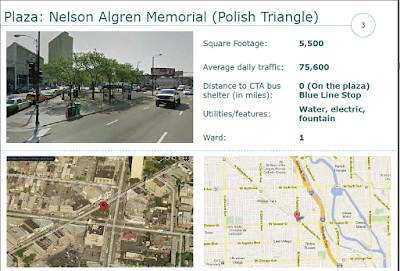 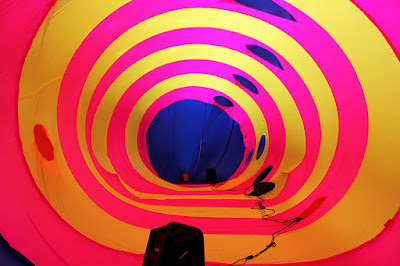