On Tuesday, the Chicago Community Development Commission will agree to sublease the former Byrd School at Orleans and Hill Street, near St. Joseph Church, to the Archdiocese of Chicago, the first step in a deal where the second part, to close later, would see the city purchase St. Boniface Church in the East Village neighborhood, designed by architect Henry J. Schlacks in 1902, and hand it over to a developer.

Since the church was closed in 1989, preservationists and neighborhood activists have been battled the Archdiocese's plans to demolished the structure, as it did the adjoining school. In 2003, the Archdiocese mounted a competition for proposals for the church's reuse, including reuse of the original interiors, that resulted in entries from such top-notch firms as Studio/Gang, Booth Hansen, and A. Epstein, with the winning proposal, from Brininstool & Lynch, floating a glass-enclosed day care center in the church's sanctuary.

Nothing came of any of these ideas, and today the plan is from IPM Amicus, which would demolish everything but the Chestnut Street facade and the larger portion of that on Noble , and insert a new 75 bed Retirement Community building, designed by Vasilko Architects and Associates, behind them.

Here's what the original building looks like, from a photo on the website of the St. Boniface activists. 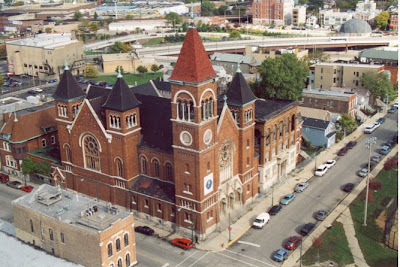 And here's my photo of the church's current east facade. 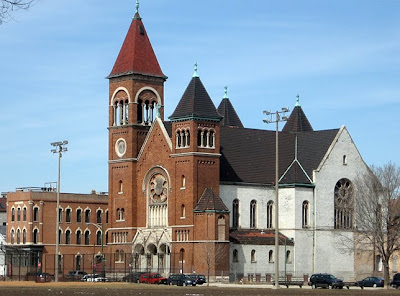 Here's the elevations from the IPM Amicus website, to the east, a fairly straightforward building, with tall, arched windows on the first floor, topped by another five stories, above which the two western bell towers remainly clearly visible. 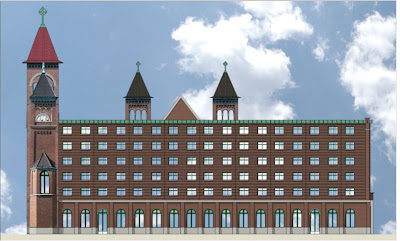 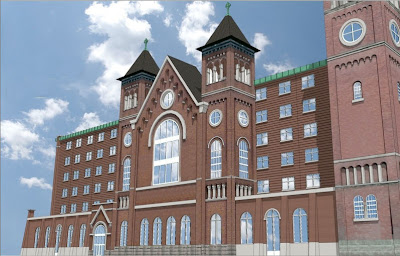 The design has now become much busier, with, on the east side, setbacks on the third and top floors marked by chicken-bone-like buttresses, and two floors added, pretty much obliterating the view to the western bell towers. 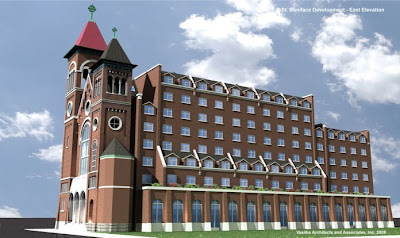 What was once a flat roof on the western side is now marked by a succession of attics. 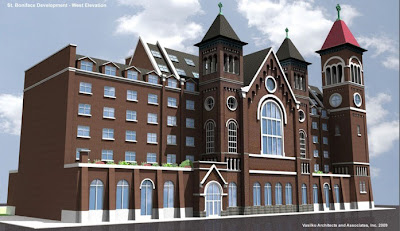 It's an archimonster! The horror!

Far from ideal, but the alternative is far worse. I'm a supporter.

I'd like to see it renovated. This current scheme sort of reminds me of Lucas Oil Stadium, were the colts play.

They can't be serious?