Field's Name to Get a Reprieve? 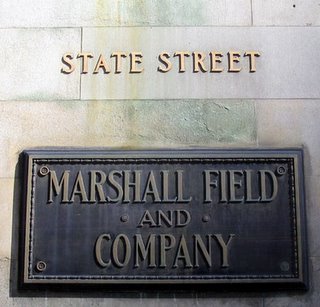 This week's Crain's Chicago Business has an interesting story by Sandra Jones on how Federated Department Stores, which acquired Chicago's the Marshall Field's department store chain last year, may be taking a second look at their plans to wipe out the Field's name and put all stores under the Macy's banner in September. According to Jones, Federated CEO Terry Lundgren was impressed on how shoppers were loading up on anything with the Fields name on it this past Christmas.

The fact that it took a run on Fields memorabilia to alert them to the fact that there's still equity in the Field's brand doesn't give me much confidence in Federated's powers of analysis, but we will see. To me, it would make sense, at least at the State Street flagship, to use a branding like "Macy's at Marshall Field's", with the Macy's name in smaller, supporting type. The store could still stock the Macy's branded merchandise, while allowing Fields on State to continue to maintain and trade on its historic, potent brand, with the same measure of independence reportedly afforded to the Macy's flagships on 34th Street in New York and Union Square in San Francisco.