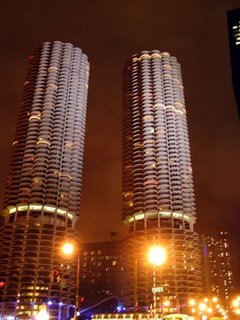 The twin corncob towers of Bertrand Goldberg's Marina City led off most of Chicago's local newscasts Wednesday night. The feds had indicted dentist Gary Kimmel, a longtime resident and condo association board member, for raking in $400,000 by leasing cars and renting out some of the nine units he owns to pimps running a prostitution ring.

A whiff of scandal can be what gives a famous building its personality, even as it is seldom without victims. Very often, drugs and death are the meat the media feeds on. Think of John Belushi dying in a bungalow at the Chateau Maremont, or Chris Farley succumbing to a heart attack in his luxury condo in Chicago's John Hancock Building. The unspoken part of the allure of a hotel, from seedy to superdeluxe, is in it's potential as safe harbour for the illicit. ("What happens in Vegas, stays in Vegas.")

This is not altogether a bad thing. A building we know only intellectually is a dry, lifeless thing. Our urban architecture is evermore dependent on commoditized plans - we're as likely to refer to "our unit" as we are to "our home." Is this architecture the instigator of our conformity, or only the honest expression of our truest selves? At the same time, however, the endless, standardized repetition of space confers not only banality but anonymity, a door identical to all the other doors, behind which we can put aside the face we prepare to meet the faces that we meet. At least until a new Supreme Court says otherwise.

Dr. Kimmel's is a sordid tale: there's nothing good to be said about the violent exploitation of underage women. Yet, judging from the media coverage, it's the kind of thing for which we have an insatiable and compulsive appetite. With these new intimations of transgression, Marina City may take on a darker, more rawly visceral association that insinuates itself deep into the most reptilian chambers of our hearts.