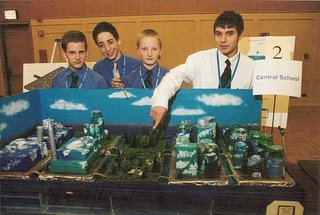 Sponsored by the National Engineers Week and locally by the Structural Engineers Association of Illinois (SEAOI), ISASCE and many other organizations, the Future City Competition serves 7th and 8th graders by introducing students to engineering with the popular Sim City software. Students design future cities with simulation software, build scale models, write essays and give oral reports on their city's design. The Chicago Area Regional Competition has begun and is looking for volunteers to help mentor, judge and sponsor the event, which will be held at UIC on January 28th The competition is occurring in thirty-seven city’s across the nation and provides the students with an exciting hands-on way to learn engineering, math and science with a personal, real world connection. Chicago has been the only city to compete every year since the program began. For more information or to receive information about signing up for the 2006 competition, email Don Wittmer or call 312-930-9119.
(Click on time for permalink) 12:01 AM