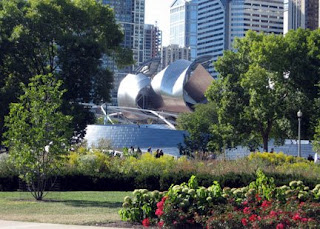 likely [be] heard at the April 17th, 2007 meeting" of the Chicago Plan Commission. It could be that the Museum thinks it has the votes to muscle its way through the Commission. Heavy lobbying has been going on in the City Council, with the Sun-Times reporting that the museum continues to play the race card in smearing opposition to its land grab as racist. The photo you see here is of the current park, derisively dismissed by Mayor Richard M. Daley as "nowhere".

David Axelrod - the Daley street fighter behind CCM's Push
The museum has retained high-powered lobbyists to advance its interests behind the scenes. In a profile of lobbyist (and Barack Obama's chief strategist) David Axelrod in the current Business Week, Reilly characterizes Axelrod's firm ASK Public Strategies as "the gold standard in Astroturf organizing. This is an emerging industry, and ASK has made a name for itself in shaping public opinion and manufacturing public support."

Axelrod's ASK is the politically-connected muscle behind the CCM's campaign. You can see the Astroturf under its fingernails in the hijacking of a community meeting on 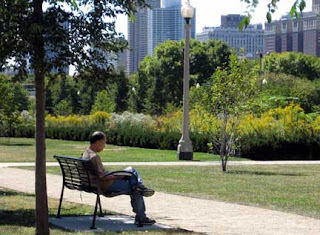 the proposal last year where museum supporters, of whom few, if any, appeared to be from the community, filled up the auditorium and forced the actual residents, overwhelmingly opposed to the CCM's plan, into side hallways. The gutter politics continued with Father Michael Pfleger who, based on an encounter with a single person attending the meeting, began echoing the canned message refrain that museum opponents were acting out of racist motives. Astroturf, in abundance. Will Axelrod's operatives succeed in placing their Astroturf blindfolds over the eyes of Plan Commission members? 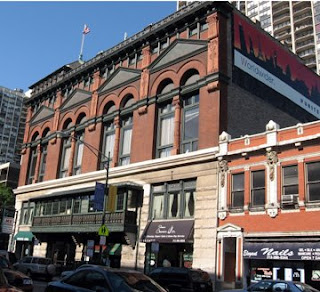 important buildings like the 1888 Germania Club on Clark Street twisting in the wind, Alderman Brendan Reilly also announced that, "Because of its significance, I sent a letter to the Commissioner of Planning and Development asking that we pursue land-marking this structure. Although there are currently no redevelopment plans before us, I would prefer to be proactive rather than reactive in order to guarantee the re-use of this significant, and important historic structure. " The property was recently acquired by strip-mall developer Kimco Realty Corporation.

Marina City
The indispensible Marina CityOnline website is reporting that Dick's Last Resort is suffering a number of setbacks in bringing its surly staff and penis-shaped hats to the concourse level of Marina City. A "Stop Work Order" from the Chicago Department of Buildings has been in effect since February 22nd, and in March Dick's failed ventilation, structural and electrical reviews. To 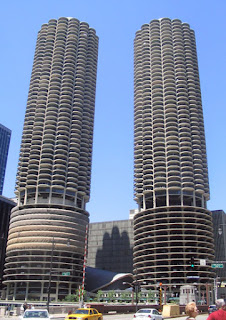 date, no fewer than seven reviews, including architectural, fire prevention, plumbing and refrigeration, have been denied. The extent of Dick's intended alterations to the exterior of the iconic building have yet to be revealed.

Just across the street, as Crain's Chicago Business reported Tuesday , LaSalle Hotel Properties, the owner of Marina City's Hotel Sax, has closed on purchasing floors 2 through thirteen of the Mies van der Rohes designed IBM Building, aka 330 North Wabash, paying $46 million for 375,000 square feet that it plans for transform into a 335 room hotel. The project will benefit from tax breaks accrued from the buildings recent designation as an official Chicago landmark. A name for the property has yet to be announced. Mieshaus by Starke anyone? Think that sucks? Ok, smartguy(gal), let's see your bright ideas - post them in our comments section.

On the Ellis Levin front, MCO also carries a story on continuing efforts by resident Mindy Verson to learn the full extent of the fees paid to the Marina Towers Condo Association's controversial attorney.

Marina City Online continues to add items to what has become an extraordinarily rich on-line portrait of the Marina City complex and its history. We'll have more on that, including the story of two extraordinary 1960's films that used Marina City as a location, a few days hence, but that's no reason not to check it all out for yourself here, with a huge gallery of images here.

Hey Mr. Becker, I appreciate the attempts to supposedly protect the park from potential destruction, but could you explain to all your readers exactly how that image of Grant Park that you show is going to change with the introduction of the CCM? (Hint: Not at all, unless you consider the image might inlclude more visitors enjoying the park due to the nearby museum.)

hey Jack,
How 'bout you explain how CCM will overcome 170 years of legal history? The Field Musuem lost it's bid to move into the center of Grant Park 100 years ago, and yet CCM thinks it can win a battle that the Field family and the city lost.

Of course the irony is that if it were not for the Ward decisions, an Armory would be in the place that CCM wants to build. That land was protected by Montgomery Ward and the Armory wasn't built, now CCM wants to violate the Ward decsions that originally protected the land.

Look into how the original building of the Art Institute was approved and the Harris Theater. Think CCM could survive the same court challenges they did?

I guess if Gigi pays enough, people will believe anything.

Jack, what's wrong with open space? Why must Grant Park house administrative offices and a restaurant (all part of the 100,000sq. foot building)? Why should CCM be rewarded for their laziness? Why is Museum Campus inadequate?

Mayor Mumbles and his political hacks will not give up. And they will spend our tax dollars defending any lawsuit over this plan.

Meanwhile, David "Hacks"-elrod and his cronies are in bed with the Sun-Times and its Democratic party supporters masquerading as journalists.

This plan is bad on so many levels that it's ridiculous. Those on the front lines against the museum plan deserve our support and thanks!

Does anyone know where I can obtain the original building plans for the Fine Arts Building.

Does anyone know where I can obtain the original building plans for the Fine Arts Building.

I think it'll be the Hotel Six. The "Sax" logotype looks to be to cater to the "bad spellers who want hostelries with happy endings" crowd.

For the Studebaker (Fine Arts) building, perhaps try asking the management or inquire at the Art Institute? Not sure where Solon Beman's papers would be these days.