Speed Bumps on the Road to Utopia

Even as we marvel at Rem Koolhaas and Ole Scheeren's spectacular CCTV tower in Beijing, take a moment to remember that their client is CCTV, the Chinese television monopoly. So? 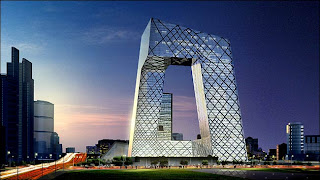 Here is a Sunday headline from the BBC: Eighty killed' in Tibetan unrest. Here's the headline from the China People's Daily: 12 policemen gravely injured in Lhasa riot. According to Monday's Wall Street Journal, CCTV's coverage consisted of pictures of Tibetan protesters "pulling down the iron gates of a Bank of China office." Pictures of the military pouring in the city? Civilian deaths and injuries? Nothing to see there, the CCTV assures us. China has also cut off Internet access to You-Tube after videos of the protests sweeping through Tibet were posted there. The WSJ quotes a Chinese official claiming a " decision to bar foreign journalists from Lhasa was made by the local government in the Tibet Autonomous Region to ensure the safety of the press." The bible of choice for China's government seems no longer to be Mao's Little Red Book, but 1984. There's a glimmer of hope in the fact it apparently still hasn't figured out how to stop Tibetans from using their cell phones to spread news otherwise suppressed.

Are architects from the West helping China move towards a more open, progressive future, or, willing victims to their own egos and delusions, are they mere window dressing for a regime that bargains booming prosperity for unending totalitarian control? Will our traditions influence them, or will their traditions erode our own ideals of democracy and freedom? The Olympics may bring a euphoric sense of future possibilities, but on a day like today, it still looks like it could go either way.