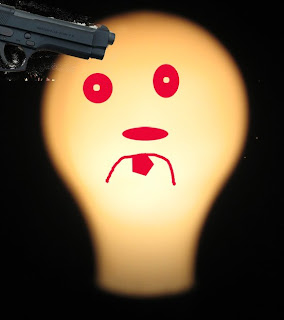 incandescent bulbs, which has been proposed in California and other U.S. locales, Australia and Europe. Politicians have been unable to resist striking a self-righteous pose against incandescents, the lighting created by a dead white guy, in favor of the squiggly cute CLF (compact fluorescent lamp).

On paper, it makes a lot of sense. CFL's are claimed to save $30 over their useful life, and save 2,000 times their own weight in greenhouse gases. But then you start looking at the fine print. You can buy a 60 watt incandescent rated at 20,000 life hours for $1.70, but, even at Wal-Mart, its equivalent CLF goes for $12.37, over seven times more costly. CFL's require more energy in their manufacture. Incandescents generate a lot more heat, bad in hot weather, but in cold more energy will must be expended to make up for the heat the CFL's don't produce. Oh, and don't turn CFL's on and off thinking you're saving electricity; it substantially shortens the life of the CLF bulb.

And did I mention the mercury? Break an incandescent bulb, and the worst part is making sure you sweep up all the pieces when you throw it away. Break a CFL, and your in Hazmat land. The presence of mercury in the air can exceed safe limits by 30,000%. Here's the State of Maine's recommendations for precautions to be taken if you break a CFL:
The only way to make sure discarded bulbs don't become a major health hazard is to either return them to the store where you got them - if they'll take them; or transport them to the nearest recycling facility - if you can find one. We can't even recycle our newspapers and plastic bags. What would make anyone think we'll suddenly become totally conscientious about light bulbs we've been used to just throwing away? Or will the costs of the long-after-the-fact-remediation that is the American tradition, both of the physical material, and of the human beings suffering from exposure to excessive amounts of mercury, wind up far outpacing whatever energy savings are gained by CFL's?

Everything in me screams that CFL's are on the side of mother, God and country, but the march of politicians legislating, with a Talibanic smugness, the virtue du jour on the rest of us makes me wonder if they've thought the thing through anywhere past writing up the self-congratulatory press release.

An acquiantance was hospitalized after inhaling the fumes from a busted CLF bulb.. he went into some kind of shock. It's a real risk!
WindyChat

l always worry when legislators try to regulate things they have no business in.
Great post!

it seems like the answer here is not the products (paper or plastic | incandescent or fluorescent) its rather how you use them. when you leave a room turn off your lights! act responsibly...and if you can't then get motion sensors that turn the lights off when no one is in the room.

its about personal action. so often i walk down a street in chicago and whether it be a shop or a home all the lights are on when no one is there.

want to help the environment... want to save money... do your part and turn the lights off. its about these small revolutions. these are what will bring about the change its not a technological solution its the very act of over consumption that we have to fix... thats the cure.

It is more than just California and other locals that are banning the incandescent bulb. The recent energy bill passed by congress and signed into law bans them in all the US.

Why do you say that we cannot recycle newspapers and bags?

In Chicago, several wards have recycling bin service and all wards have blue bag sorting service.

For items like CFLs, they can be recycled at the city's Household Hazardous Waste facility at 1150 N. North Branch on Goose Island.

Other analyses have pointed out that the reduction in coal burned to generate the light from a CFL (vs. an incandescent bulb) more than offsets the increase in mercury that goes into the bulb itself.

I am anxiously awaiting the introduction of LED lighting for general purposes, though.