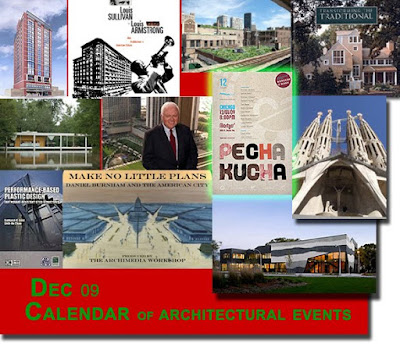 It's the holidays, and what says Christmas better than the Gene Siskel Film Center's annual showing of Hiroshi Teshigahara's documentary Antonio Gaudi? Added to the mix this December are two showings of the excellent new documentary, Make No Little Plans: Daniel Burnham and the American City, with director Judith Paine McBrien scheduled to be attendance both times.

Don't blink, because the month's events are heavily front-loaded, with nearly half just this week, including Pecha Kucha 12 on Tuesday the 1st, including architects Katherine Darnstadt, Matt Dumich, and Larry Kearns, at Martyrs, a lecture by Jonathan Hill at the AIC, and Bill Walton on the TVA Dam failure for SEAOI, Frank Youngwerth relating the life and work of the two Louies (Sullivan and Armstrong) at CAF, Mike Repkin and Nick Petty discussing the Joy Garden at at Northside Prep for Urban Habitat Chicago at the Lincoln Park Public Library, and Joe Antunovich discussing the new Ronald McDonald House for Friends of Downtown at the Cultural Center. Jim Loewenberg gets ULI Chicago's lifetime achievement award. Jim Cuno discusses The Modern Art Institute at SAIC, with Ben Nicholson and Jacquelynn Bass discussing Non-Miesian Modernity and Messy Modern a week later. Stuart Cohen and Julie Hacker discuss their new book at CAF, where Jeanne Gang talks about her Lavezzorio Community Center later in the month.

Holiday stuff: There are the traditional holiday gaslight tours of Glessner House. And parties galore, often for a good cause. SEAOI has an open house soliciting toy donations for Metropolitan Family Services, Chicago Women in Architecture benefit a food drive and their scholarship fund, CSI Chicago helps out the Greater Chicago Food Depository.

And, as they say, much, much more. Check out all the great events here.