The Gropius in Chicago Coalition will be holding a rally today, Tuesday, November 24 at noon in Daley Plaza to protest the destruction of the architecture of the Michael Reese Hospital campus, and to save the remaining buildings designed with collaboration of Bauhaus co-founder Walter Gropius. All concerned residents are urged to attend, and to wear black.

This is the 1912 powerhouse designed in 1911 by Frost & Granger to support the needs of the Chicago & Northwestern Railroad's grand terminal just west of the Loop. 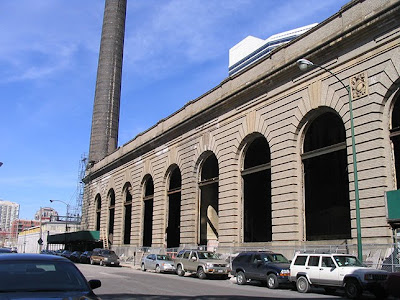 The building outlived its usefulness quite a while ago. It stood empty for 30 years. Yet it survived long enough for its value to be recognized. Hartshorne Plunkard Architecture came up with a plan for the restoration and reuse of the structure that has won awards and kept an important part of Chicago's history alive for its future generations. 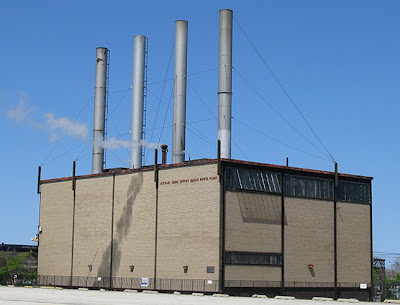 This is the muscular and handsome Michael Reese Power Plant, designed by Friedman, Alschuler and Sincere in partnership with The Architects Collaborative. Finished in 1953, it is one of a precious handful of Chicago buildings that bear the direct input of famed Bauhaus architect Walter Gropius. 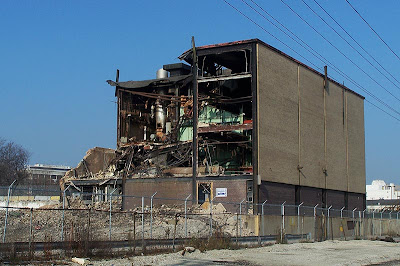 This is the power plant last Saturday, the latest victim of the Daley administration's mad, wanton rush to destroy all but two buildings on the Reese campus for an Olympics that will never come, and a megadevelopment for which there is no plan and no money.

The Museum of Modern Art in New York is currently hosting a major exhibition Bauhaus 1919-1933: Workshops for Modernity. It follows a triumphant run as Bauhaus: A Conceptual Model in Berlin earlier this year. Throughout the civilized world, the legacy of the Bauhaus is discussed, debated, celebrated and honored. In Chicago, it's just an opportunity to write $11,000,000 worth of checks to grateful demolition contractors. 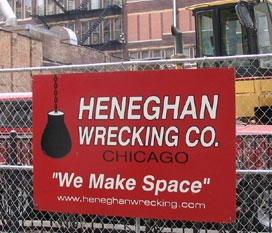 Whatever the flaws in the plan and design of the Michael Reese campus - and there were flaws - it was, in the end, a courageous symbol of optimism, of people who had decided, not to pack up and to flee to the suburbs, but to commit themselves to rebuilding.

The destruction of the Reese campus, along with its incredibly beautiful landscaping is, in contrast, a symbol of exhaustion, of an administration that has run out of all ideas except for raw demonstrations of power. The Gropius buildings must be destroyed just as evidence must be destroyed, lest future generations, in growing to embrace these buildings so central to the Chicago's architectural legacy, might have the chance to save and restore them, and in the process render history's verdict on the poverty and corruption of a desperate mayor's actions. 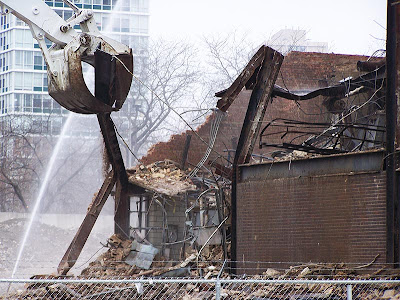 The Heneghan tag line says it all: "We make space."

There is absolutely no comparison between the artistic craftsmenship of the first photo and the nightmarish box of the second.

Are you advocating ugliness? We have enough of that.

Ah, more blindness. There is just as much craftsmanship in the Gropius buildings - probably more - than in Northwestern Power Station. A large global coalition recognizes the importantance and beauty of the Reese buildings, but I guess we have to destroy them because you're of the opinion they're ugly, and you want to make sure wiser future generations won't get the chance to form their own judgement.

wow, i must say i was most interested in the second and third pictures. artictic craftsmanship goes beyond rusticated masonry joinery and arches. the gropius buldings are wonderfully playful, proportioned and abstract.

We have a multi-part tour of the Powerhouse Building and the challenges of renovating it at YouTube with Jim Plunkard and Paul Alessandro.

The shortsightedness regarding modernist architecture in this city is truly vile. Remember, people didnt see the reason to save Sullivan buildings back in the 60's. Our errors today regarding Michael Reeses and other similar structures will be viewed with the same contempt and bafflement years down the line.