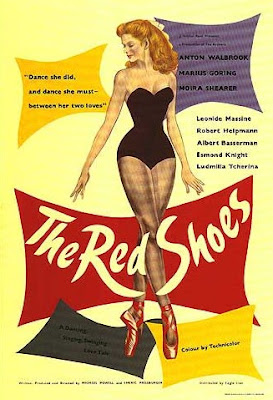 I've always avoided watching Michael Powell and Emeric Pressburger's The Red Shoes when it popped up on television. With its smudgy images and color bleeding at the edges, the compromised prints on display gave the impression of a hoary, shopworn artifact of an obsolete style of filmmaking.

That was then. After a seven-year campaign by Martin Scorsese, The Red Shoes has undergone a miraculous restoration that again lets us see one of the most remarkable films of the past century the way it was meant to be seen. It's being shown at the Music Box through Thursday.

The restorers at the UCLA Film & Television Archive, led by Robert Gitt And Barbara Whitehead, had their work cut out for them. The Red Shoes was shot in three-strip Technicolor, a process in which three separate strips of black-and-white film ran through the camera at the same time, with a prism and filtering gelatin creating three black and white negatives, capturing color separations of cyan, magenta and yellow which were then used to create positive prints. The three original negatives the UCLA restorers had to work with shrunk at different ratios down through the decades, a problem compounded by mis-adjustment of camera settings during filming. The negatives were filthy with dirt, scratches, and, worst of all, mold, which had begun to feed on the very images themselves. 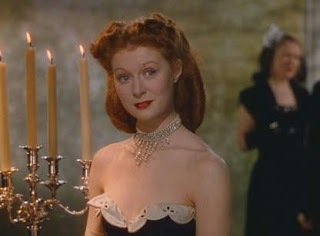 frames were scanned digitally at a 4K resolution and painstakingly repaired back to their original quality. The restorers quality-checked their work against an original Technicolor dye transfer print of the film.

The plot of The Red Shoes is pretty basic. World famous impresario takes a gamble on two unknowns - a ballerina and a composer. Gestative tribulations are followed by triumph. Romantic complications. Conflict between life and art. Tragic death. Anguished remorse. As Pop Liebel once said, "There are many such stories."

What sets The Red Shoes apart is, first, the quality of the performances, especially that of Anton Walbrook as the Pygmalion/Henry Higgins Boris Lermontov, who wills the ambition of Moira Shearer's character, Victoria Page, to became a great dancer into reality. Walbrook was gay, and some 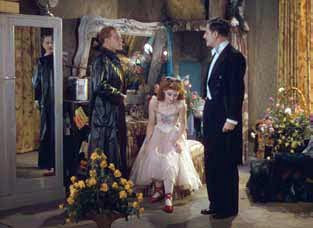 writers have also pointed to Walbrook's Lermontov, as gay, as well, as he shows no romantic inclinations and surrounds himself with a coterie of male collaborators.

Even so, Lermontov's obsession with Page, his jealousy of her amant, the composer Julian Craster, played by Marius Goring, is as intense as any lover's, and it's the savage fight for control of Vicky between Lermontov and Craster as she prepares in her dressing room to go on stage for her comeback, that sends her fleeing them both, down a winding, constricted stair, a mirror to another stair at the beginning of the film, which Craster and a mob of his fellow students race up to claim a seat in the gallery for a Covent Garden premiere.

The title may be The Red Shoes, but it could more accurately - if less commercially - have been called The 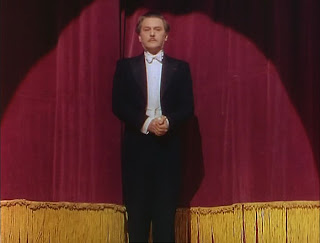 Impresario. Walbrook is the magnetic core of the film, portraying a man, as observed by Roger Ebert "who imposes his will but conceals his feelings." His Lermontov is the Deus ex machina that, far from resolving the complications of the plot, sets them diabolically spinning, only to have them turn brutally back on him in a way that make him the tragic victim of his own actions.

The extraordinary images sear The Red Shoes into the audience's emotions, creating a visual dialectic between the realism 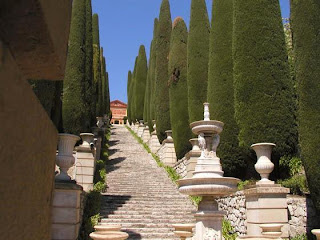 of the every day - the bustling workaday Covent Garden district post World War II - and the rich fantasy of dreams and ambition. When Vicky Page is summoned to Lermontov's villa - she arrives in an almost surreal teal outfit, complete with tiara - it's not just any abode, but the Villa Leopolda, which just last year changed hands for a mere $750,000,000. Vicky moves her way through a mazelike landscaping, to a steeply rising, seemingly endless stairway, lined with soaring cypresses, that makes her journey seem like Orfeo's ascent to Olympus.

The center of the film is The Red Shoes, itself, a 17 minute ballet created by Robert Helpmann expressly for the movie. It's based on a Hans Christian Anderson tale about an evil cobbler who 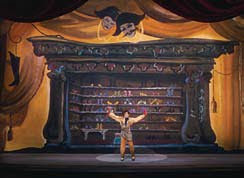 places a pair of magical red shoes on the feet of a young dancer, who dances, and dances, and dances. In fact, she can't stop dancing, The red shoes have taken control of her, and she can't take them off. Her clothes turn to rags and she dances to her death, collapsing before a group of worshipers outside of their church, where the controlling spirit at least lets them go home after the epiphany. Think Dance Sacrale with drabber clothing.

Visually, the sequence is one of the most stunning in all of cinema. It begins with a stage stuffed Zeffirelli style, dazzling but concrete, and then veers out into the pure fantasy that only film can create, veering into a kind of dream state in which the physical world keeps transforming in the service of stream-of-consciousness wonder, fear and desire. As created by master cinematographer Jack Cardiff and production designer Hein Heckroth, the incredibly vibrant colors become, in themselves, an indelible expression of emotion. 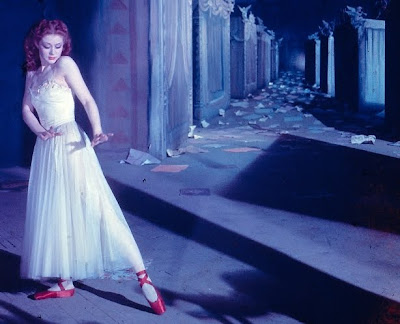 Thanks to the restoration, we can again experience these images at their original, hypnotic power. A Blu-Ray version of the restored film has been released in Britain and will undoubtedly eventually be released here. But scale is as much a part of the composition of this film as anything, and even a 60 inch flat panel fails to do it full justice. You have a rare opportunity, only through this Thursday, December 17th, to really see The Red Shoes, at the Music Box, at 3733 North Southport. If you're smart, you won't let it pass by.

Hey, I'd like to see how well YOU would do if you were your own editor. Thanks for the heads up. Correction made.