Because of the year-end holidays, the December Calendar of Chicago Architectural Events is looking to be intensely front-loaded, so we wanted to give you a heads-up on some great items taking place in the first few days of December. 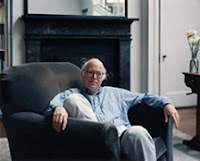 Half an hour later on the evening of the 2nd, famed sociologist Richard Sennett, in an event co-sponsored by Urban Habitat Chicago and the Graham Foundation, will be delivering a lecture, Edges: How People Are Separated in Cities and What Can Be Done About It.

Tuesday December 7th brings Volume 16 of Pecha Kucha Chicago where a dozen of so presenters are get 20 slides for 20 seconds each to "reveal their passions, work and inspirations."  Among those on this month's roster are Kevin Lynch, Jon Langford and the legendary Ken Nordine.

Elsewhere in December, John Vinci and Ward Miller talk about their spectacular new book, The Complete Architecture of Adler and Sullivan at the Glessner House Museum on December 8th.

Igor Marjanovic and Katerina Rüedi Ray discuss and sign copies of their book, Marina City: Bertrand Goldberg's Urban Vision, at a lunchtime lecture at the Chicago Architecture Foundation December 15th. Today, November 22nd, is the 50th anniversary of the ground-breaking for the pathbreaking city-within-a-city project.

Lawrence Okrent talks about The History of Grant Park for Friends of Downtown at the Chicago Cultural Center Thursday, the 2nd.

And on the 1st at 6:00 p.m., at Instituto Cervantes, Belinda Tato of Ecosistema Urbano delivers the third and final lecture in the series Restoring, Regenerating, Rethinking: The Urban Transformation of Madrid, Barcelona and Bilbao.

We're just getting started and we've already got two dozen items on the December calendar.  Check them all out here.