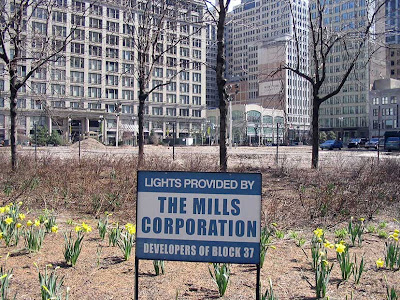 On Thursday, just months before he leaves office after a record 22 year reign, Chicago Mayor Richard M. Daley announced the city would demolish the 1908 Michael Reese Hospital building that he had promised to save.

On a cool, Fall day in October of 1989, Richard M. Daley watched a Caterpillar tractor ram through the wall of a building opposite Marshall Field's on State Street.  It was the ritual beginning for the destruction of almost every last building on a full city block, Block 37. "We take a giant step forward today," said Daley, "to rebuild our central business district" and make it a place where "people will live, work and play . . . "  There would be over 2 million square feet of new construction,  worth $500 million, including a five-story shopping  atrium, and two sleek towers, 30 and 50 stories tall, designed by Helmut Jahn.  Over 10,000 people would find employment, and nearly $10 million would go the to city each year in sales taxes.

Except, of course, it was all a mirage.  The proposed project fell through.  Jahn walked away after years of work. For nearly two decades, except for an existing ComEd substation,  Block 37 would basically remain a sprawling dirt pile. The development that was going to save the Loop became its most enduring blight.

The city, which had spent $80,000,000 to assemble all the property on the site, and sold it to the original developer for $12 million, finally bought it back in 2002 for $32,500,000, only to sell it to still another developer two years later for $12,900,000.  And then the city dumped a quarter billion dollars on a Block 37 "superstation" for an express train line to O'Hare that didn't exist, pulling the plug before it could open because no one could see where the cost overruns would end.  Instead of $9 million a year, not of dime of sales tax was generated by Block 37 over the next nearly 20 years, another $150 million+ down the drain.


Daley had inherited the scorched earth concept from the Washington administration, which had rammed through the City Council a de-designation of an official Chicago landmark, the 1872 McCarthy Building on Block 37's southwest corner,  so it could be destroyed along with everything else.  Also destroyed was the 1928 art-deco Hillman's building housing the venerable Stop & Shop gourmet emporium, which, if it could have been helped to hold on for a few more years, would become the great downtown Food Emporium that Daley always wanted for State Street but never got.  There was also the landmark-quality 1890 Unity Building, the skyscraper built by heroic Illinois governor John Peter Altgeld, and the United Artists Theatre, designed by Holabird & Roche as the Apollo, opened in 1921 as a legitimate theater, which could have provided a much-needed smaller capacity venue for the mayor's revived Randolph Street district.

Richard M. Daley, of course, was willfully blind to all this.  He chose to see only Block 37's then diminished state.  He would solve the influx of gang-bangers with what one police official called "crime prevention with a wrecking ball."  Leave no trace of the city's proud history or architecture behind.  Wipe it out.  Wipe it all out. 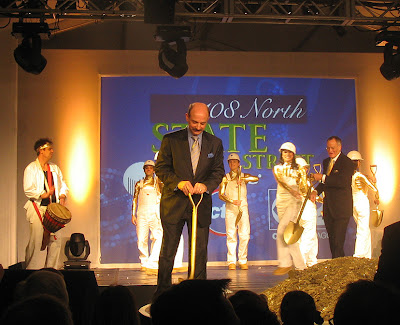 Richard M. Daley wouldn't be so lucky; the world he lived in was very different from that of his father's.  It wasn't until sixteen years later, in November of 2005, that ground was finally broken for Block 37, in a strange, high-glitz show with dancers, quick-change artists, models in gold lame, gold shovels for everyone, and even gold-flecked soil to turn over.  Which all turned out to be more than a bit ironic when the developer who put on the show, Mills Corporation, soon went bust and passed the project onto another developer who, in turn, also lost control of the development just before its completion. 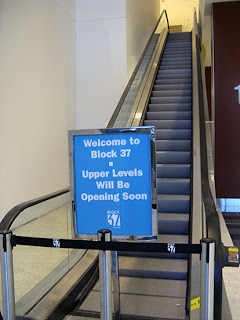 When Block 37 finally opened four years later, it was a sad, "better something than nothing" subset of the  grandiose original ambitions, centered on a half-empty shopping mall which had fallen into receivership to a consortium of banks that now refuses to fund the build-outs required to sign additional tenants.

Richard M. Daley began his political career as "Dirty Little Richie", an obnoxious, bullying favorite son of the all-powerful Richard J. Daley. But, especially after a defeat in his first mayoral run in 1983, he learned and he grew.  He won in 1989 as a conciliator, bringing together neighborhoods and constituencies that had risen in protest against his father, healing the fractures of the Council Wars years that followed Harold Washington's untimely death.  Daley's earliest terms of office were times of optimism and great achievement, but as his tenure wore on, the city again grew lazy, all too eager to dump more and more of the heavy lifting at Daley's door,  with the mayor all too happy to accept the additional power.  He slowly assumed his father's role as civic monarch without anyone taking much notice.

And no one really noticed when it began to curdle.  It's my sense that Richard M. Daley started to develop a contempt for all those people who flattered him - the courtiers, the developers, the boodlers - heaping praise on the mayor in public and holding out their hands for their share of the favors in private.  The mayor's most willful initiatives were often his most embarrassing blunders; his greatest achievements, such as Millennium Park, those where we had the good sense to lend a helping hand and get out of the way.  And the nasty habits of his youth returned: the bullying, the intolerance to dissent, the constant ridiculing of any ideas other his own, the incoherent, angry rants that were always sure to lead off the 10 o'clock news.

The job of running Chicago and securing its future started to become too much for him, but we had become so accustomed to willfully not seeing the truth that it flew beneath our radar, even when the mayor publicly confessed, while pushing for the 2016 Olympics, that he was coming up empty. He told reporters that the Olympics was now all he had got - he no longer had a single alternative idea for generating growth and securing Chicago's future.  "I have nothing up my sleeve," the mayor told us, but we chose not to hear.   It was an all or nothing gamble on a two weeks sports extravaganza six years into the future.  Which we lost.  In the first round.  Now, The Hangover.

Block 37 and Michael Reese - twin bookends of Richard M. Daley's reign.  At the beginning, he destroyed Chicago's architectural legacy on Block 37.  At the end, to make way for a chimerical billion dollar Olympic athlete's village, he indulged himself in another insane rush, to destroy every last vestige of the city's irreplaceable legacy of Bauhaus-inspired architecture, designed with the collaboration of Walter Gropius: the buildings of Michael Reese hospital. 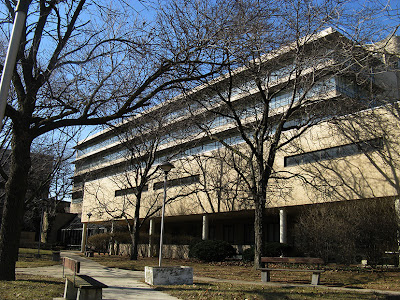 When the threat to Reese and the importance of its architecture was presented with meticulous documentation and research by architect and scholar Grahm Balkany of the Gropius in Chicago Coalition to the Commission on Chicago Landmarks, one commissioner quickly agreed that some of buildings met the National Register criteria for landmarking.  And then the useless Commission did what it's designed to do when confronted with mayoral whims or the desires of clouted developers: nothing.  The Commission's then Chairman, Daley crony David Mosena, was the mayor's Planning Commissioner during the obliteration of Block 37.


It's a truism that Adrian Smith again mentioned at his IIT lecture last night: the greenest building is the one that already exists.  Yet "America's Greenest Mayor" destroyed 1.6 million square feet of constructed space, creating 120,000 tons of debris, enough to fill a train seven miles long,  representing the embodied energy equivalent  of a million barrels of crude. It's estimated that it will take 65 years for new construction to break even against the embedded energy lost in the demolished structures. 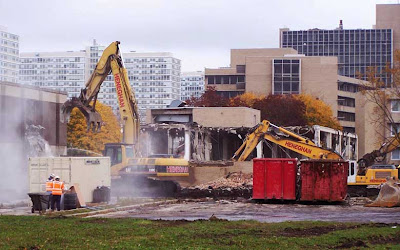 (Photograph: © Grahm M. Balkany / Gropius in Chicago Coalition.)
The city borrowed $85 million to acquire the Michael Reese site, and another $12 million to demolish all the buildings, except the original 1908 hospital building, which was to be preserved.  A new TIF district was to be created to funnel another $100 million in subsidies to the project.

For what?  For nothing.  Another mirage.  Another financial sinkhole.  Another empty, endless, dirt-filled lot.  Check it out in this aerial photo by Lawrence Okrent on Blair Kamin's Cityscapes blog. 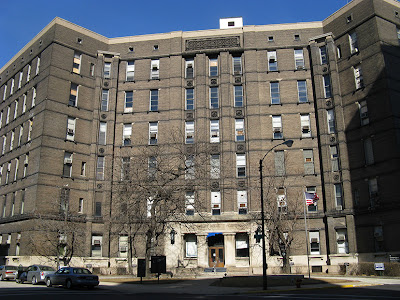 Oh, and that original 1908. Prairie style hospital building by Schmidt, Garden & Martin that  Daley promised to save?  He lied.   After acquiring the property, the city did nothing to seal and secure the building from rain, scavengers and squatters.  Blair Kamin reported on Thursday that it's been allowed to deteriorate to a state where the mayor now says there's no alternative to demolition.  And they'll spend another $2 million to do it.   "If the structure was sound, if there was no hole in the roof, you would save it.  But there's a huge hole in the roof.  How are you going to save it," opined Daley, glossing over his own role as slumlord-in-chief.

Daley claims it would cost $13 million to secure the hospital, so where's the money?  You can bet that if it were a hugely profitable company with its hands out, Daley would find some TIF fund to dip into, but unless you're a clouted insider, there's apparently no longer money in Chicago for preserving or building things - just for tearing them down and creating more empty lots.  Welcome to Detroit.

This is how it began.  This is how it ends.  As Rahm Emanual is in L.A. to help raise millions for his quest to become Chicago's next king, this is the deeply troubled, bankrupt city, the government run out of ideas, that Richard M. Daley dumps in our laps as he walks away.

my guess is it will end up being used for future expansion of mccormick place.

McPier can't handle the debt service on what they have now.

A fitting tribute to Daley's architectural legacy. These are monstrous errors visible even to this recent Chicago transplant.

Another thing; what are we in for when a Chicago mayoral candidate has to schlep all the way to Los Angeles to raise funds for his campaign back here?

Beautifully written for such a disturbing and sorrowful piece. Well done, Lynn. Now if only we could staple these pages to the forehead of every Landmarks Commission member...